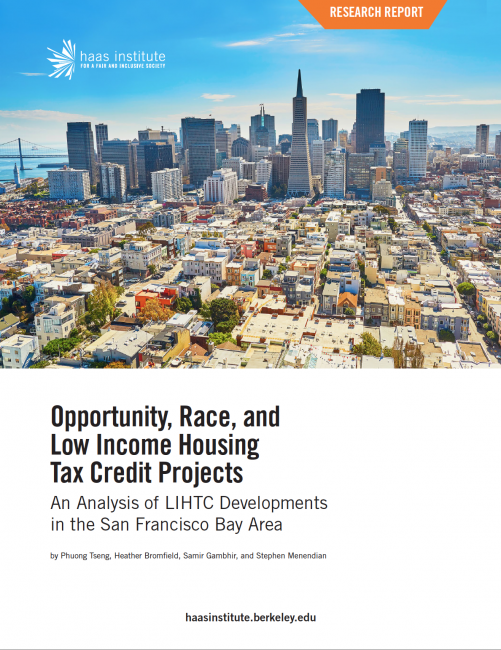 This study comprehensively analyzes the administration of the Low Income Housing Tax Credit (LIHTC) program in California by examining LIHTC developments in the San Francisco Bay Area. This vitally important program shapes whether millions of Americans and their families have access to good jobs, safe neighborhoods, and secure housing. The findings in the report can be used by policymakers and other stakeholders to advocate for changes to California’s procedures for allocating tax credits.

Read our press release on this research.

The Low Income Housing Tax Credit (LIHTC) program is the largest federal housing program in the United States, redirecting hundreds of millions of dollars per year in funds towards the creation and preservation of low-income rental housing. Indirectly subsidized by federal coffers, states enjoy enormous discretion in administering the program, with each state establishing its own criteria for awarding the tax credit.

The Haas Institute for a Fair and Inclusive Society at UC Berkeley analyzed LIHTC data from the California Department of Housing and Community Development (HCD) and the California Tax Credit Allocation Committee (TCAC) on housing projects financed by the tax credit within the San Francisco Bay Area.1  The intention was to understand the temporal and spatial patterns of LIHTC developments from 1987–2014, including projects financed with both federal Four Percent (4%) and Nine Percent (9%) Tax Credits.2  To assess the state’s efficacy in promoting housing opportunities for low-income Californians in well-resourced, racially integrated neighborhoods, this report analyzes project categories by neighborhood opportunity and demographic composition:

We utilized UC Davis’ Center for Regional Change Regional Opportunity Index (ROI) methodology and their placebased data to recalculate the opportunity index for the Bay Area at the census tract level, as displayed in Map 1 in the Appendix.6  Additional data were gathered from the U.S. Census Bureau American Community Survey (ACS).

This comprehensive report shows that LIHTC developments in the Bay Area are relatively well spread across boundaries of opportunity. We also find that the Nine Percent Tax Credit outperforms the Four Percent in financing projects in higher opportunity neighborhoods. Furthermore, based on a 2015 report published by the United States Department of Housing and Urban Development Office of Policy Development and Research, California’s LIHTC funding allocation formula has reduced the number of LIHTC projects that are sited in areas with high concentrations of poverty.7  Upon deeper inspection, however, our analysis illuminates areas for improvement, including the need to provide more LIHTC developments in higher opportunity neighborhoods. Thus, TCAC should adopt Qualified Allocation Plan (QAP) criteria that will promote LIHTC projects in higher opportunity areas to ensure that households seeking subsidized rental housing have access to opportunity and upward mobility.

California is in the midst of a housing affordability crisis, with over half of renters statewide considered to be “costburdened” and nearly a third considered to be “severely cost-burdened” according to federal criteria.8  Additionally, there is a 1.5 million unit shortfall of rental housing units that are affordable to very low- and extremely low-income renters. State criteria to determine which projects receive California’s limited amount of federal tax credits, as enacted in the, must be analyzed to ensure that the state is incentivizing the siting of low-income rental housing in high-opportunity areas.9 ,10

The QAP matters because it is a crucial determinant of where developers can receive public financing for Nine Percent Tax Credit projects, affecting whether projects are sited in neighborhoods with higher or lower opportunity and whether projects are built in racially integrated or segregated areas. It is vital to site LIHTC projects in high-opportunity areas—where quality resources and services enhance opportunity for residents. Understanding the patterns of community-level resource distribution and service provision surrounding LIHTC-financed projects provides insights as to whether government housing subsidies are fostering upward mobility and furthering fair housing for lowincome residents.

Two existing state-by-state research studies provide initial suggestions as to how California’s QAP has affected project siting within the state, though it should be noted that prior to this report’s publication no study has assessed LIHTC projects in the Bay Area relative to other metro regions. Most recently, an analysis in 2015 from HUD revealed that California is making moderate strides at reducing the poverty exposure of LIHTC units. There was a 13.1% decrease in the number of neighborhoods with LIHTC projects which had poverty rates over 30% between the 2003-2005 period and the 2011-2013 period.11  However, a study in 2006 indicated that California was not successful at promoting LIHTC projects in racially integrated neighborhoods. More than 70% of LIHTC projects in California’s metropolitan areas were sited in census tracts where the percentage of non-whites was greater than the percentage living in the respective metropolitan area, suggesting that projects were disproportionately sited in segregated neighborhoods.12 ,13

This report presents a series of tables, charts, and maps that display the analyses we performed to assess LIHTC projects, units, awards, construction types, and housing types in terms of neighborhood opportunity and demographic composition.

Analysis of LIHTC Developments by Opportunity

Analysis of Acquisition, Rehabilitation, and New Construction by Opportunity

In this section we demonstrate how Large Family LIHTC developments were sited relative to opportunity as compared to other types of developments, and we subsequently discuss project siting relative to the racial/ethnic composition of neighborhoods. Prior to 2016, Large Family projects were defined by having at least 25% of units with three or more bedrooms, and with at least 1,000 square feet of living room space. These projects are important to consider independently from other kinds of housing because they are more likely to house families with children, and the consensus in the academic literature is that child well-being, as well as their lifetime opportunities, are correlated with the neighborhoods in which they are raised.16  Our racial and ethnic analysis demonstrated that there are a disproportionate number of LIHTC projects, units, and awards in neighborhoods where the population of non-whites is greater than 40%. 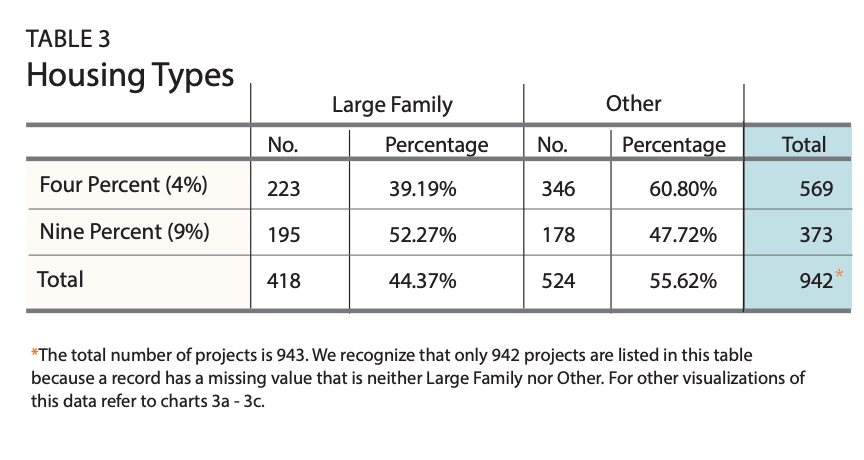 We recognize that aggregating all housing types that are not classified as Large Family as ‘Other’ does not show the distinctions between different LIHTC project types —which include at-risk, special needs, non-targeted, and SingleRoom Occupancy (SRO)—and we may therefore be overlooking or neglecting a variety of other dynamics. Yet, the process of combining these other categories allows us to draw clear distinctions between housing types that are likely to have smaller unit sizes and standards from Large Family housing.

It is concerning that New Construction Large Family housing projects are built in areas that are not ideal for families because resources, services, and amenities are limited or inadequate, and may be in areas with poorly-performing neighborhood schools, high crime, or environmental hazards. We urge that priorities must be given to siting Large Family developments in high-opportunity neighborhoods to benefit families with children and foster well-being and upward mobility (see Table 8, and Charts 3b and 3c in the Appendix).

This section presents California LIHTC projects, units, and awards relative to racial or ethnic composition of census tracts disaggregated by Four Percent and Nine Percent Tax Credits. It is crucial to analyze these residential patterns relative to opportunity to determine whether LIHTC developments are reinforcing or exacerbating patterns of segregation.17  For a visual illustration of LIHTC projects and neighborhood demographic composition, refer to Map 5 in the Appendix.

While effort was taken to ensure that this analysis was performed as rigorously as possible, it is important to highlight several limitations. One limitations is our breakdown of project data from 1987–2014 into two groups. The “before 2007” category is a span of 19 years of data, meaning that there are far more projects, units, and awards in that category, whereas there is only 7 years’ worth of data for the “after 2007” category presented in table 2. To mitigate this issue, the charts display the percentage of projects; this standardizes the data by showing proportions instead of sums of 19 years’ and 7 years’ worth of data, respectively.

A limitation of our demographic analysis is our aggregation of the Hispanic, African American, Asian, and Other racial groups into the category of “non-white”. Combining several racial groups together may not provide a holistic evaluation of which racial group(s) receives the least affordable housing options and support from the federal housing program.

In addition, we classified Asians as “non-whites” for the purpose of the demographic analysis. Nationally, a high level of non-white segregation generally raises fair housing concerns because of the nation’s history of racial discrimination and exclusion. However, in the Bay Area context, the dynamics may be different for Asians because many neighborhoods—particularly those in close proximity to Silicon Valley—may have very high populations of Asians who are employed by nearby technology firms, which pay salaries above the regional median income. Currently, there is a lack of research on whether neighborhoods with high percentages of Asians experience lower levels of opportunity than whites with similar incomes—especially in areas where these groups have high-paying jobs.

Since the inception of the LIHTC program in 1986, research on the location of LIHTC projects in relation to opportunity have been mixed in their assessments on the efficacy of the program.20  Our analysis of LIHTC projects in the San Francisco Bay Area has revealed similar patterns to those historically observed, in addition to some novel trends.

After assessing tax credit housing locations in the Bay Area, the pattern of LIHTC developments seems to promote a larger-than-desired percentage of its affordable housing in low-opportunity areas non-whites comprise 50% or more of the population. While California has made improvements in ensuring that LIHTC units are not exposed to high levels of poverty in the last ten years, there are still areas for improvement, such as encouraging Large Family and New Construction projects in higher opportunity neighborhoods and maintaining the number and quality of Acquisition and Rehabilitation developments.21

Refer to page 24 in the U.S. Department of Housing and Urban Development Office of Policy Development and Research 2015 Effect of QAP Incentives on the Location of LIHTC Properties report.

Below is a summary of our key findings. 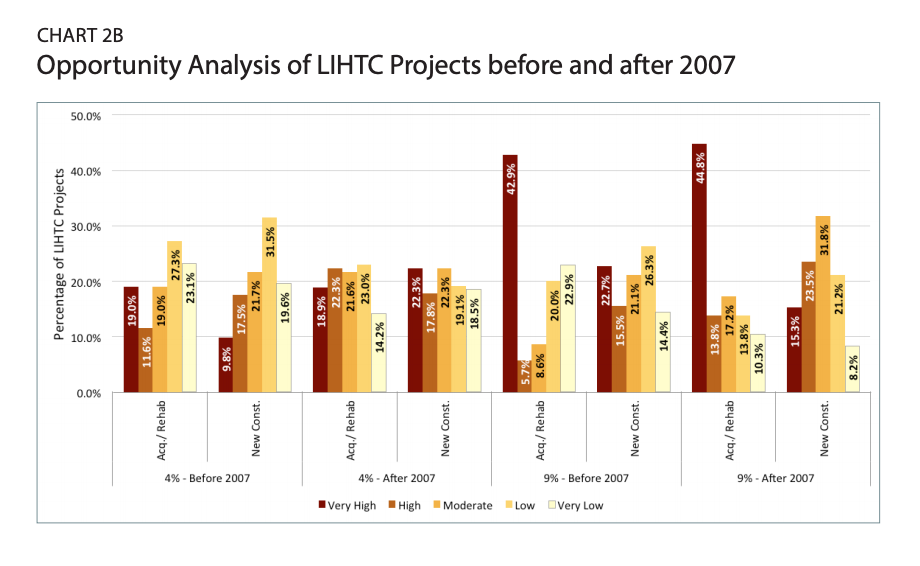