BERKELEY, CA: A California state agency has approved for the third consecutive year the use of an opportunity map developed by the Othering & Belonging Institute and partners designed to guide the siting of affordable housing using a federal tax credit.

The 2020 TCAC/HCD California Opportunity Map provides guidance to the California Tax Credit Allocation Committee (TCAC), which administers housing funds through the Low Income Housing Tax Credit (LIHTC) program, on where to direct resources for the construction of low-income housing.

One of the aims of the program is to ensure that affordable housing is constructed in neighborhoods that offer higher resources and greater opportunity to their residents. The map measures the quality of the economy, environment, and educational opportunities of every census tract in California. 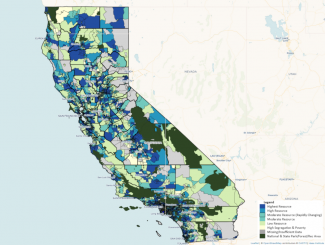 The map’s indicators include neighborhood wealth, school performance, air and water pollution, access to employment, and several other factors that make these neighborhoods particularly beneficial for low-income residents.

The mapping project was spurred following a 2017 investigation by the Othering & Belonging Institute that found the majority of LIHTC resources for low-income housing were being directed to low-income neighborhoods, and that only a small percentage of low-income housing was being constructed in high-opportunity areas.

The findings led to the creation of the Fair Housing Task Force, a partnership between the Othering and Belonging Institute, the Terner Center at UC Berkeley, the California Housing Partnership Corporation, and the Urban Displacement Project to develop the opportunity mapping project for the TCAC.

The 2020 opportunity map includes updated data that reflects the most recent figures concerning levels of wealth and segregation across California.

A new feature of the map this year is its measurement of “rapid change” neighborhoods, which are neighborhoods that have experienced rapid growth in recent years and are on the path to becoming high resource.

This and other ideas will continue to be explored as the housing task force looks to perfect its maps in the coming years.

The 2020 and previous year maps, along with methodology and data tables, are accessible on TCAC's website.