BERKELEY, CA: A California state treasury committee has approved for the second consecutive year the use of an Opportunity Area Map developed by Haas Institute researchers and partners to help determine which regions of the state are best suited for the construction of low-income housing.

The state’s California Tax Credit Allocation Committee (TCAC), which administers housing funds through the Low Income Housing Tax Credit (LIHTC) program, voted last month to use an updated map for 2019 as part of an initiative to reverse patterns of poverty and segregation.

While the committee had first voted to adopt the Institute’s opportunity maps one year prior as a draft, they won’t be put to use until this year.

The maps measure the level of opportunity of a region, broken down by census tract, by considering levels of poverty or wealth, and degree of segregation. The hope is that by using opportunity maps, the state will allocate low-income housing construction funds for areas with higher resources, which would result in both racial integration of neighborhoods, and offer new economic opportunities to low-income people. 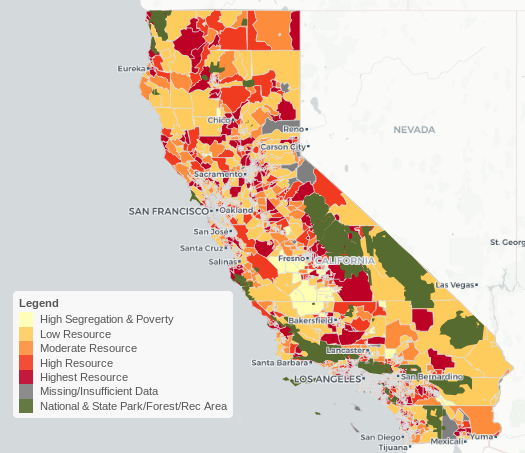 [Click on the image to view the interactive map]

Prior to the committee’s adoption of the map, the LIHTC program was allocating funds to build low-income housing in the opposite way, according to a Haas Institute analysis of publicly available data on the program’s website.

The figures show that from 2000 to 2016, the LIHTC program awarded about $5.7 billion in tax credits for the construction of developments that contain affordable large family units. Yet more than 70 percent of those credits (roughly $4 billion) went towards neighborhoods classified as “Low Resource” or “High Segregation and Poverty.”

In contrast, only 5 percent (about $300 million) of those credits went to developments in neighborhoods classified as “Highest Resource.”

To address the lopsided allocation of these credits, TCAC and the California Department of Housing and Community Development in February 2017 convened the Fair Housing Taskforce, which included members of the Haas Institute. One of the outcomes of the taskforce was the development of the opportunity maps.

Other groups that helped develop the methodology used to construct the 2018 and 2019 opportunity maps included the Terner Center at UC Berkeley, Enterprise Community Partners, the California Housing Partnership Corporation, and several others.

TCAC first voted to approve the concept of using opportunity maps in December 2017. The 2019 version of the Opportunity Area Map made several improvements over the 2018 proposal, including an improved interactivity functions, increased specificity in the measurement of local jobs, and greater consideration of the specific challenges of measuring opportunity in rural areas.

Over the coming year the Haas Institute plans to incorporate “neighborhood change dynamics” into the opportunity maps which would allow the project to assign a higher priority to building low-income housing in rapidly growing neighborhoods.

The Institute will also continue to update census and local data used in our maps to reflect the most recent figures, further improve measurement details for rural areas, and consider new indicators of opportunity in addition to wealth and segregation levels.

Links to the 2019 opportunity map as well as the methodology and a raw data table used to develop it are available on the TCAC website.