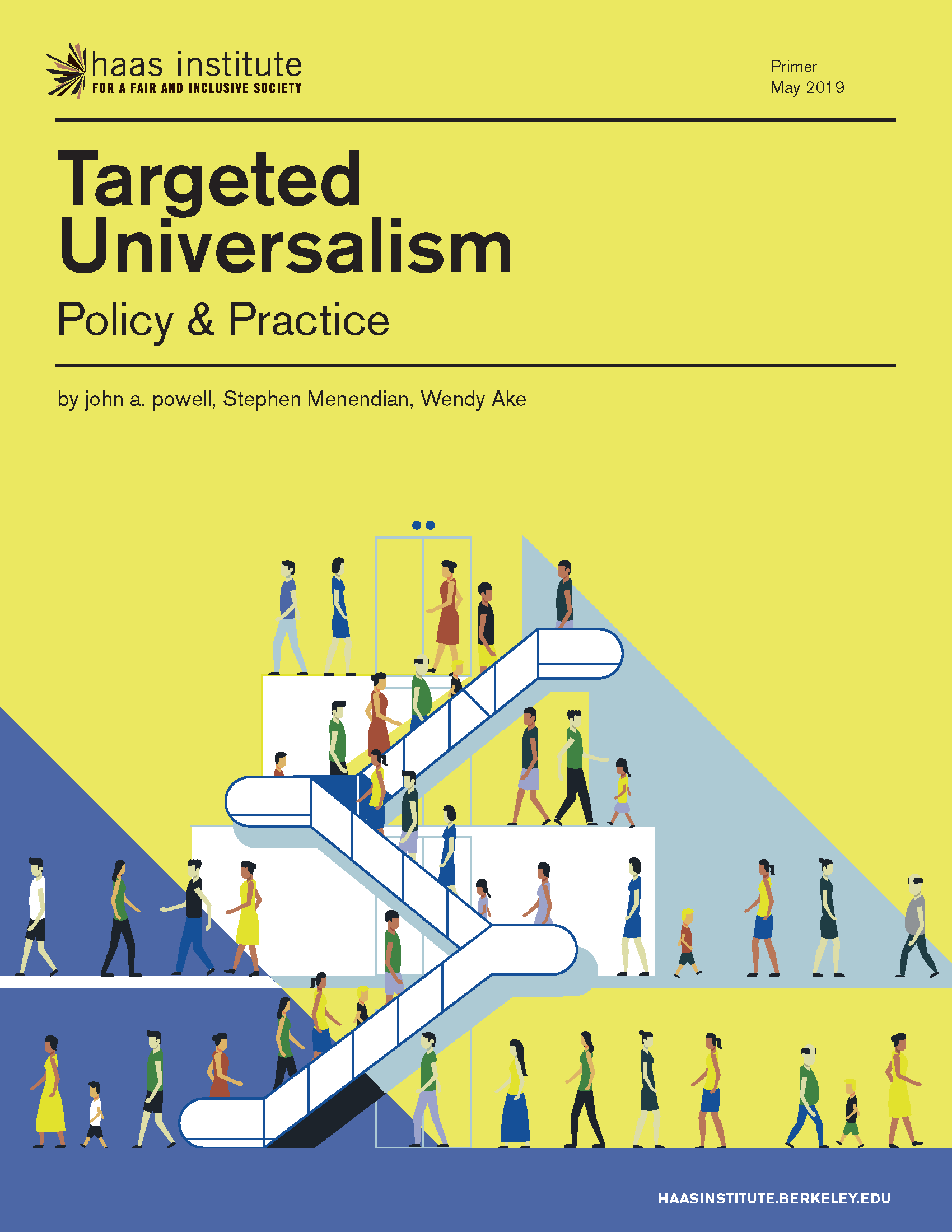 In an era of political polarization and fiscal austerity, policy debates too readily become trapped in a binary of either universal responses or targeted solutions. Universal responses enjoy a degree of legitimacy in a diverse and pluralistic society, but they may also be viewed as unaffordable and overly ambitious, while also inadequate at helping those most in need. Therefore, the most marginalized people are often the most skeptical of ostensibly universal policies. Targeted policies may be more efficient and less costly, but by targeting a particular group, these approaches are often viewed as unfairly helping one group over another, seeding hostility and resentment.

Listen to an interview with Director john a. powell on targeted universalism

Among the core strengths of the targeted universalism framework is its potential for ingenuity and boldness in policy thinking, which opens up the possibilities for experimentalist design in a nuanced fashion that rejects an “either-or” approach.

Targeted universalism is a platform to operationalize programs that move all groups toward the universal policy goal as well as a way of communicating and publicly marketing such programs in an inclusive, bridging manner. It is an approach that supports the needs of particular groups, even the politically powerful or those in the majority, while reminding everyone that we are all part of the same social and civic fabric. As such, targeted universalist policies are more resistant to the critique that government programs serve special interests, whoever that might be.

Watch john a. powell break down targeted universalism in this short video

We urgently need aligned and coherent strategies that create belonging and promote bridging. Targeted universalism provides an approach for orchestrating these efforts. Targeted universalistic interventions undermine active or passive forces of structural exclusion and marginalization, and promote tangible experiences of belonging. Outgroups are moved from societal neglect to the center of societal care at the same time that more powerful or favored groups’ needs are addressed.

The implementation strategies derived from a targeted universalism framework come in many forms. Some may be simple technical fixes or modest changes to existing programs. Others may be more sweeping changes or deeper structural reforms. Although the targeted universalism framework supports a wide range of policy interventions, the process for deriving implementation strategies unlocks the potential for transformative change. Such changes cannot arise without unraveling the narrow range of preconceived implementation possibilities held by many policymakers and reconstructing aspirations for an equitable society in which everyone can thrive. By emphasizing the universal goal as a way of justifying a diversity of implementation strategies, transformative change possibilities can be envisioned, pursued, and aligned.

This primer is offered in the spirit of sharpening and contributing to a large body of policy models. Targeted universalism is a platform that jettisons an overly formalistic, one-size-fits-all policy formula in favor of an approach that is more outcome-oriented. As such, targeted universalism opens up the possibilities for experimentalist, manifold pathway policy regimes. It is a framework that adds nuance that can complement and accommodate the best work within the domain of innovating policy change. This type of agenda requires deliberate strategizing, ground-truthing, and smart organizing. The growing community of powerful policy, advocacy, community-based organizations and others can meet the challenge. Indeed, they are already well on the way.

TU in the news

Introduction To meaningfully advance economic justice, we must enhance existing government systems and create new supports targeted to residents most impacted by inequality. In 2019, more than one in three California residents was considered poor or...

Equity 2.0? What is Targeted Universalism and How Does It Address Inequality?

This is an excerpt taken from this May 2022 webinar in which OBI Director john a. powell explains the concept of Targeted Universalism. This excerpt was originally published here. Transcript john a. powell: What happened in terms of the application...

“Belonging” is both a powerful and ambiguous concept. It reflects something essential to the human experience — a core need — but is not as tangible or easily comprehensible as shelter, nutrition, and rest.

Reimagine Education for All: Equity and Targeted Universalism

Children, family, and situation differ not just at the individual level but also at the group level similarly to race, class, ability and other important indicators.

This paper is one of several upcoming case studies that demonstrate how the Institute's Targeted Universalism framework is being put into practice by local organizations and governments.

At a 2012 speaking engagement with the Oakland Unified School District, titled “Leading Towards Equity - Targeted Universalism,” john a. powell delves into the concept of targeted universalism and its importance. powell discusses why universal and...

By: Director john a. powell Population Health- Determinants, Outcomes, and Inequities and the Role of Targeted Universalism.pptx

Video: Equity is not enough, we need targeted universalism | #AskOBI

john a. powell, head of OBI and UC Berkeley law professor, swiftly traces the history of (in)equality and equity in this installment of AskOBI. In doing so, he points us to next steps, but what comes next? Arguing the equity is not enough, john a...