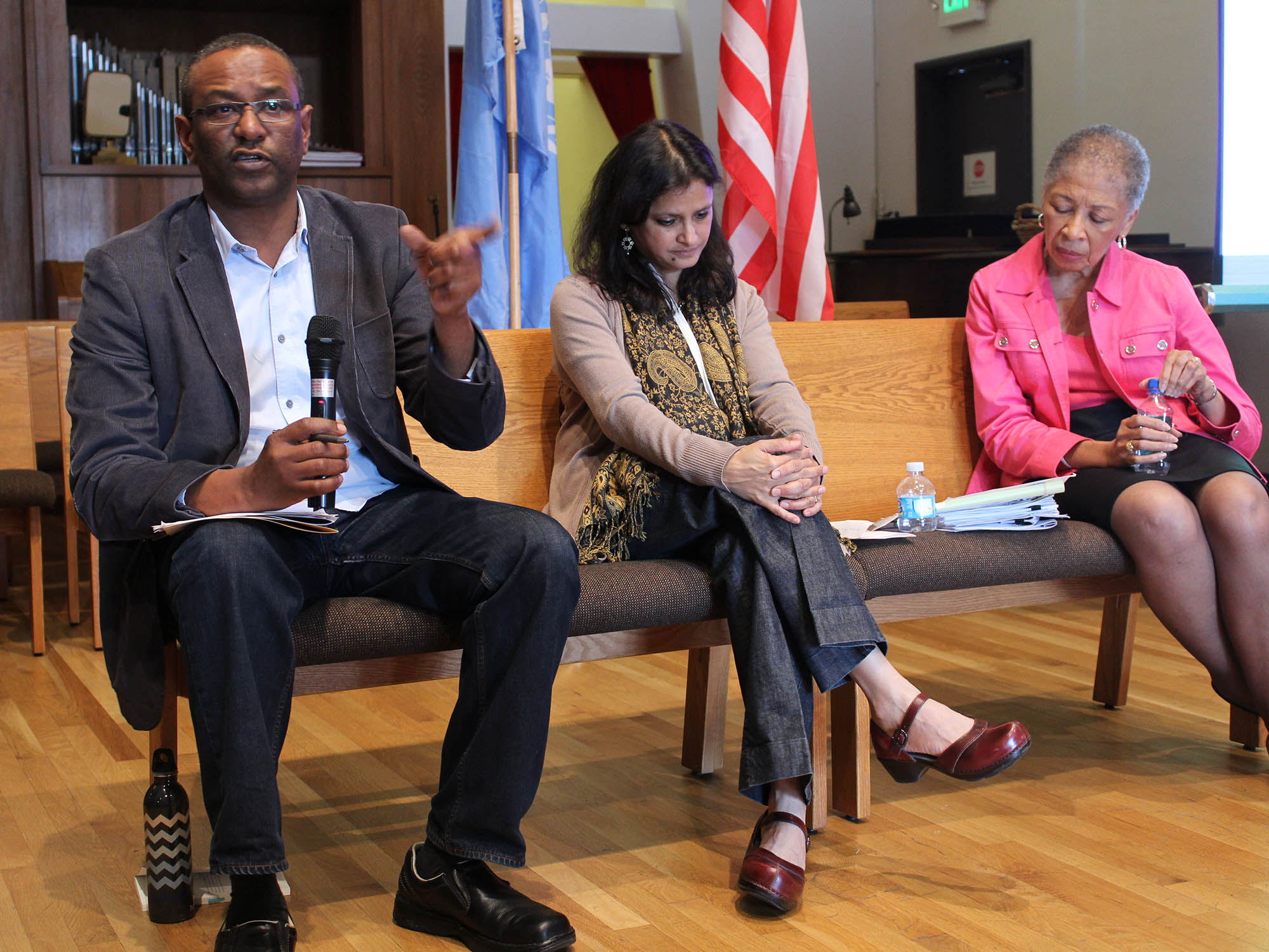 Access to food is a human right. The commodification of food is the major obstacle to transforming that declaration into a reality for all of the world’s citizens and not just an aspiration.

Human rights and food justice advocates and scholars shared this message at a presentation hosted by the United Nations Association (UNA) of the East Bay at the University Lutheran Chapel in Berkeley on Jan. 10.

Speakers addressed the challenges to food production and distribution, like climate change and land grabs, as well as opportunities to use international treaties and the Universal Declaration of Human Right’s food provisions to eradicate hunger, malnourishment, and enhance the quality of life for hundreds of millions of people.

“The right to food does exist,” said Julianne Cartwright Traylor, associate director for International Programs at the USF School of Law. “It’s an interdependent right. When we talk about that right, we are also talking about the right to health, education, (and) the right to work.”

We have enough food to feed 10 billion, yet almost one billion are hungry. ... We can do it. Just need to have the (political) will. It's in our hands. We can accomplish it all legally. 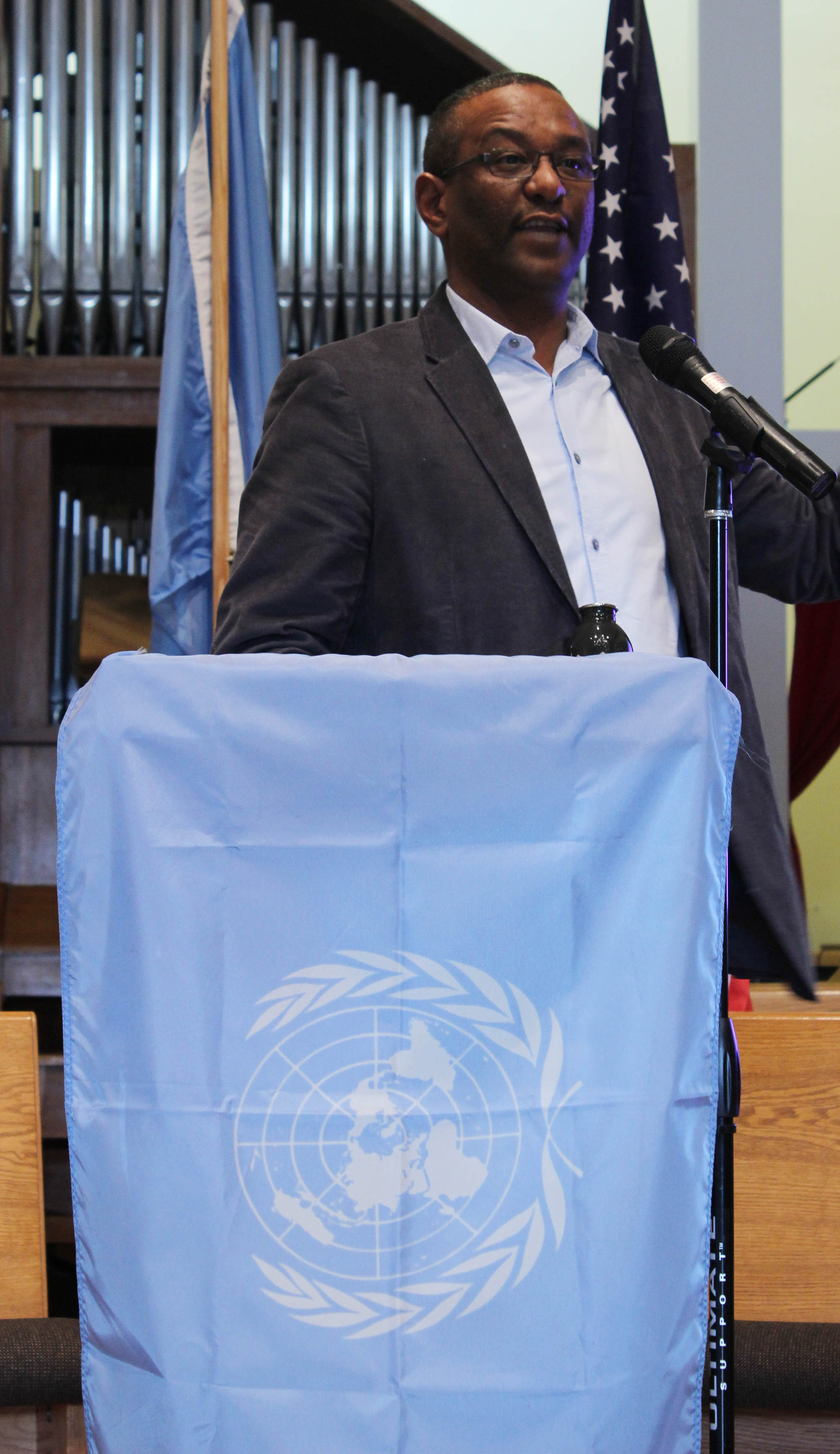 To explain the challenges of the current food system, it is necessary to understand the system and its relationship to social, political, and economic systems.

“If you isolate a feature like hunger, you will miss it,” Elsadig Elsheikh, director of the Global Justice Program at the Haas Institute for a Fair and Inclusive Society said. “To change or challenge a system, we have to know the reality of the system.”

The food system has many contexts, but the most influential aspects relate to health and finance, Elsheikh said. The health aspect deals with recognizing the multiplicity of hunger. While many people may think of starvation as hunger, there is also malnourishment and undernourishment, when food does not fulfill the body’s needs.

Financialization of the food system has nothing to do with the production of the ‘real’ economy, he said. Finance capital has been able to isolate the value of food and bundle it with other “commodities”, like student loans and home mortgages, to generate profits. Although nothing is produced, like manufacturing industries, these derivatives greatly impact the economy and the food system.

“We have enough food to feed 10 billion, yet almost one billion are hungry,” Elsheikh said.

Although powerful interests and nations behave as if fulfilling the right to food is an unobtainable goal, speakers said, the empowerment of smallholder farmers can eliminate hunger.

“Food production does not have to do with hunger,” Anuradha Mittal, executive director of the Oakland Institute said. “It’s not Safeway and Monsanto that feed the world, it is smallholder farmers in Asia, Africa, and Latin America.” Smallholder farms differ vastly from in the factory farms in food production. Farmers typically produce food for their own families and villages, while large-scale operations are focused on exporting the food they produce.

Global financial institutions, however, do not support “subsistence” agricultural production, or farming that is not geared towards fulfilling external markets, Mittal said. Western nations use the Global South, or developing countries, as a “food basket,” pressuring nations to grow food for them. With food being treated as a commodity, the current food system is about fulfilling profits and privileged consumerism, not feeding all people. 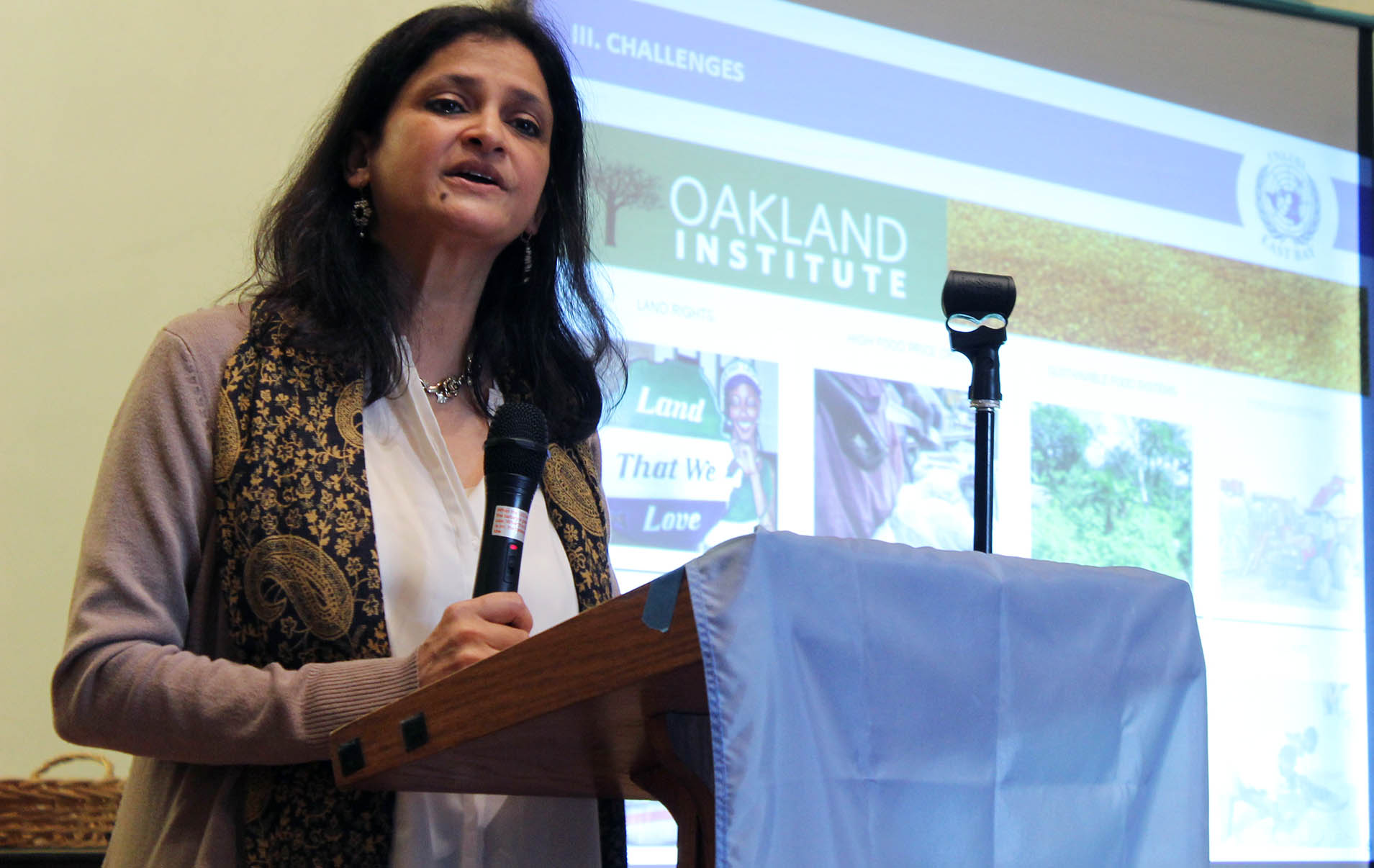 Mittal explained how many World Bank policies prioritized economic markets over food security, biodiversity, the livelihoods of smallholder farmers and the vitality of indigenous communities. Farmers and advocates are not begging for government handouts, Mittal explained, but a policy framework that enables people to feed themselves. She called on human rights advocates to question the current discourse and take the legal means to remove people from power who continue to promote policies that disrespect human rights and the natural environment.

“You don’t have to feed Africa, Africa can feed herself if people get out of the way,” she said.

As a new millennium scramble for Africa takes place, Elsheikh compared the food system to colonialism, with resources being extracted from the indigenous peoples. But the neoliberal global food system can be overturned. “We can do it. We just need to have the will,” he said. “It’s in our hands. We can accomplish it all legally.”

One in nine people on our planet go hungry every day. By 2050, that number will likely go up as the world population rises to more than nine billion.

Under the banner of “Our Land Our Business,” small farmers and civil society organizations mobilized across the world last fall in opposition to the “moral bankruptcy” of the World Bank’s neoliberal policies of “Doing Business Ranking.” These free trade policies benefit agribusiness in wealthy nations at the expense of smaller farms in the Global South.

Learn more about the UN Association of the East Bay.