Any serious attempt to tackle many of Africa’s interlocking socio-political and economic challenges, such as food insecurity, must accept that Africa’s “problems” are global as much as they are local. The continent’s issues are not exclusively self-inflicted by mismanagement and corruption, and require more than technical or administrative fixes. They necessitate a tremendous disentangling of Africa’s economies from the global network they were founded within.

The historical patterns of incorporating the African continent into the global economic system are very well documented, and shaped by structural linkages of the continent’s economies to those of Europe, America (the Global North), and more recently China. In the post-independence era, the continent’s various economies and their supply chain have remained uninterruptedly linked to their former colonizers. Then and now, the flow of products, knowledge and information between producers and consumers were easier circulated across the seas than between regional and neighboring countries. Today, African countries still have more established trade relationships with the Global North than with one another. These trade relationships with the Global North were reinforced in the 1980s through free trade agreements that further enmeshed African countries in an unfair global trade system. In this trading system, African economies are relegated to providing only raw materials, a position that has cost the continent tremendously because producing finished goods is a more lucrative modality in this system. This position has effectively prevented African countries from building the infrastructures necessary for sovereign agricultural, manufacturing, and service sectors. 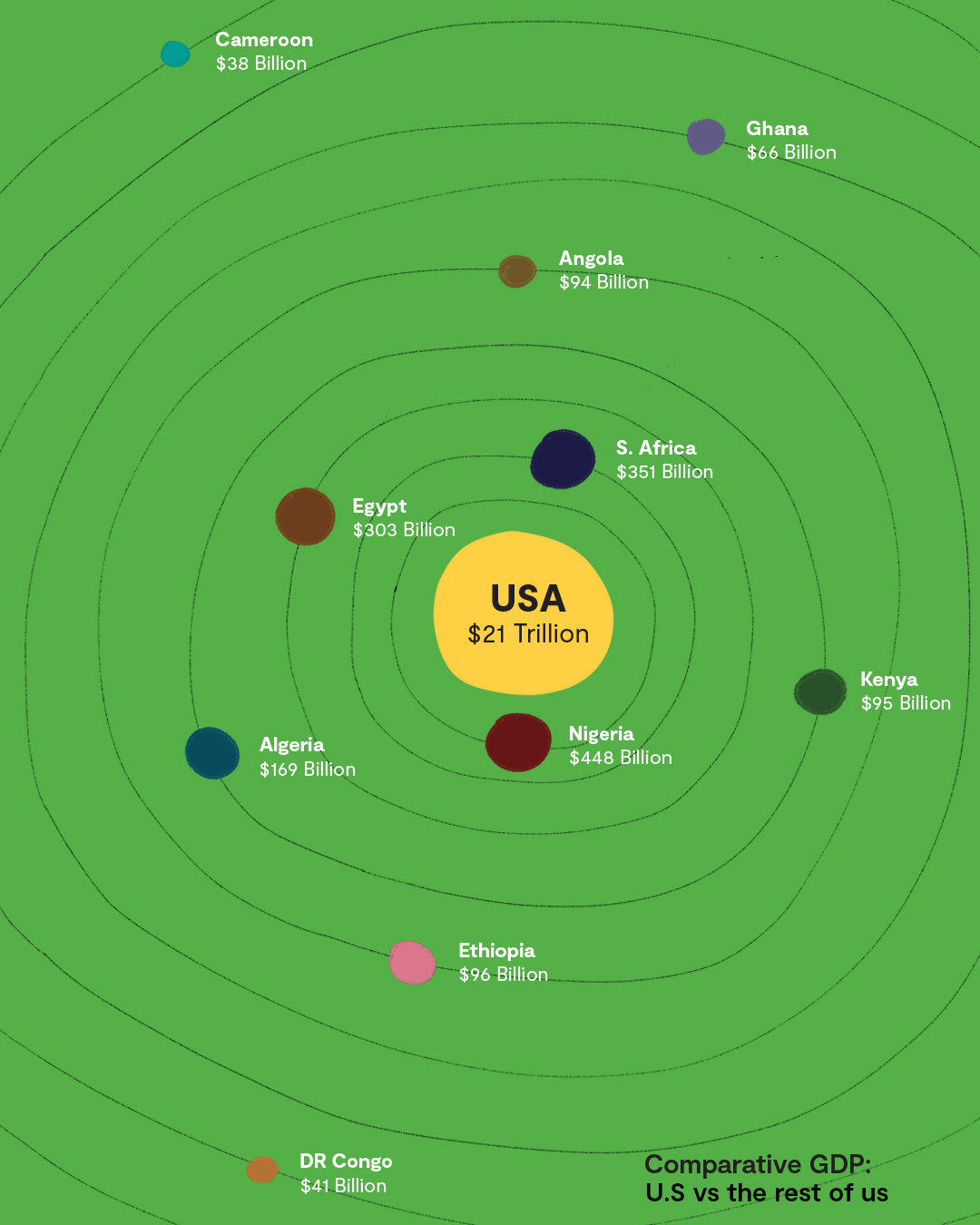 Free trade discourse departs radically from its practices. The idea of free trade implies an even exchange based on impartial market forces which determine the values of goods and services. However, the reality is that trade is highly uneven and concentrated. One such cause of trade imbalance is the 1980s Structural Adjustment Programs (SAPs), a set of economic policies predicated on strict privatization of public sectors, open national economies for multinationals, and austerity measures implemented by the International Monetary Fund and the World Bank to spur economic growth in the affected countries. These SAPs restrained most countries in the Global South from investing in value-added agricultural products, while the Global North were just doing the opposite. These policies have crippled most national economies on the continent, and made them extremely vulnerable to the impact of the global financial system.

The United States and European Union increased their agricultural production by implementing subsidies and tariffs in their favor. The overproduction of agricultural commodities in the US and EU dominated global markets, and allowed them a considerable competitive advantage, to the extent that African countries were made into dumping grounds for the US and EU’s surplus crops. These surplus crops have often been sold at lower prices than domestic crops, thus driving domestic farmers out of the market. Yet, to receive loans, African countries have been restricted by the set of rules set forth by the cartel of international financial institutions, including the IMF, the World Bank, and the World Trade Organization, among others, from pursuing similar policies of subsidizing their agricultural sectors. Instead they have been forced to accept loan restrictions, unjustified high interest rates for such loans, and unfair regulatory systems that have made their agricultural products very costly. As a result, African countries have lost one opportunity after another to advance their sovereign national agricultural sectors.

Given the scale and inevitable consequences of foreign debt, it is imperative to emphasize the economic, political, environmental, and social consequences that are negatively impacting labor relations, intensifying dispossession of rural communities, and devastating local food systems in many African countries. However, when we examine the ratio of debt to the GDP, which is a measure of fiscal solvency, for African countries, and compare this ratio to any high-income country, such as the United States, we find a striking double standard. The US borrows without restrictions, and without the label of “mismanaged” or “corrupt.” African countries can’t borrow, and when allowed to, must contend with the many restrictions imposed as “reforms.” These reforms, in reality austerity measures, often bring devastating impacts to already vulnerable populations and sectors, particularly agriculture and food systems. 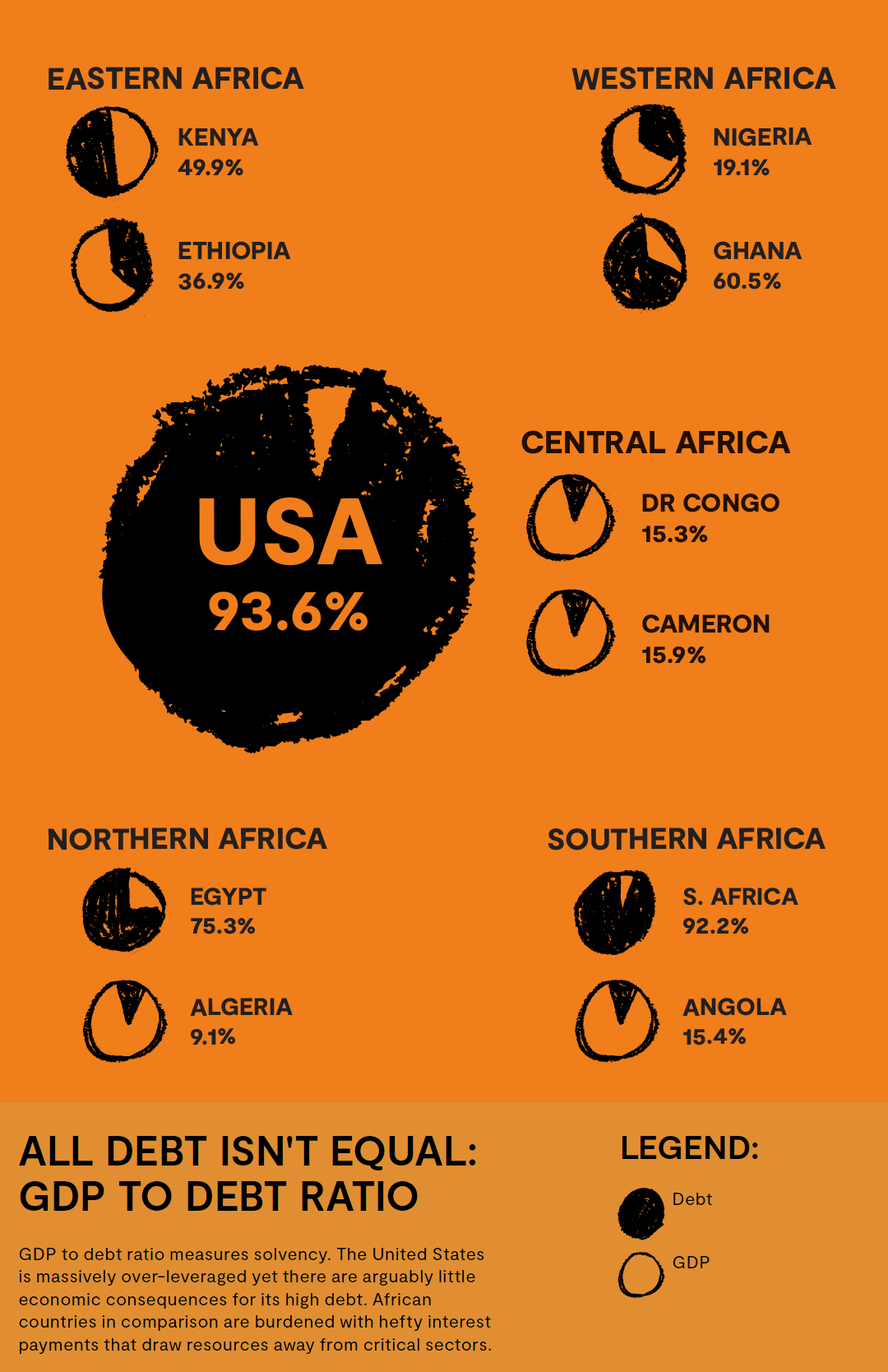 Among the restrictive reforms imposed on many African countries is the infamous “Doing Business Project,” which the World Bank launched in 2002. Doing Business has pushed many African countries to privatize their public sectors and relax their regulatory systems to create “friendly” conditions for investment. The assumption, which has never borne out, is that foreign investments will be injected into national economies and boost growth. This program is a replacement to the 1980’s SAPs narrative orchestrated by the same global actors.

Many African countries create a “friendly environment” for foreign direct investment, either by selling their arable lands or providing a relaxed regulatory financial system; however, both practices bring disastrous economic outcomes. First, the current upsurge of land deals has exacerbated the continent’s preexisting food insecurity and threatens to make it a lasting feature of its sociopolitical systems. Second, financial deregulation permits massive illicit capital flight from the continent into the Global North. A 2020 report by the United Nations Conference on Trade and Development found that almost every year, an estimated $88.6 billion flee the continent. This is equivalent to 3.7 percent of Africa’s GDP, or the combined annual fixed total of AID and foreign direct investment. This illegal flight includes tax evasion and deceptive trade shipment invoicing by multinational corporations, illegal markets, and wide corruption supported by both local and international actors.

A Solution for Africa

The totality of these practices is indeed the tragic achievement of a global trade system guided by development opportunities informed by a neoliberalist framework. Development policies in the continent need to be tackled in the multifaceted context of underdevelopment, asymmetrical global trade, and economic dependency.

This article originally appeared in the UK-based Sandwich Magazine.