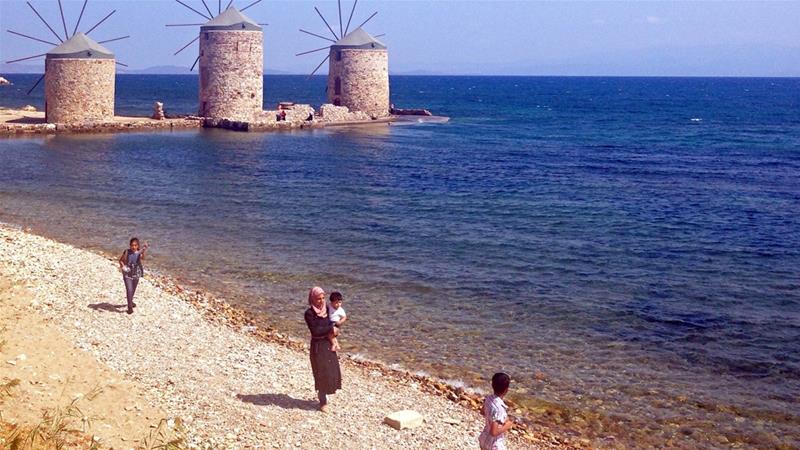 Image courtesy of Nadia Barhoum/AlJazeera
[Image Description: Four refugees, including a mother holding a child, by the shore in Chios, Greece]
I spent two weeks on Chios volunteering and working with refugees who languish in despair and often succumb to suicide.

In mid-November, more than 100 locals on the island of Chios descended on the Souda refugee camp in the middle of the night. Refugees were terrified; they had nowhere to go and no one to turn to for help.

Not only did the police not protect them, but when the locals attacked and began beating refugees, the police officers went in and arrested dozens of men from the camp. Molotov cocktails were thrown at the refugees and dozens of tents, along with the few personal belongings inside, burned to the ground.

Among the injured was Karim, a 19-year-old Syrian boy I met in September. He told me that while running away from the attackers, he fell and injured his hand.

This was not the first time Karim had to run for his life. While he managed to get out of his hometown Raqqa alive, others were not so lucky.

Sitting in a stuffy metal container in Souda camp in September, he told me about one of his friends who fled to Turkey, but was captured by the Islamic State of Iraq and the Levant (ISIL, also known as ISIS) members there. His head was returned in a bag to his family a week later.

Karim had been on the island of Chios for more than three months when I met him, and he is still waiting now to hear from the European Asylum Support Office (EASO) about his case. He fears being deported back to Turkey, where his life could be in danger.

Like Karim, many refugees on Chios worry they will be deported back to various warzones. But there are also others who wish to return to conflict-ridden countries where at least they could die in dignity rather than face a slow death in Greece, stripped of their humanity and will to live.

During the two weeks I spent in Chios volunteering as a legal translator, I witnessed extraordinary despair. Each day, a refugee would attempt to violently end their own life and every person I spoke with had suicidal thoughts. This feeling of hopelessness has not receded since I left, and conditions seem to be getting worse as each day passes.

Once the refugees step off the rafts, they are bussed to the administrative processing centre, which is a converted warehouse in a desolate location. The building has one entrance: a locked metal gate that is constantly blocked with tens of desperate bodies, pushing, waiting to enter. People wait for hours in the heat or cold to get inside.

Once they make it to the entrance, the Greek police, who man the door, thoroughly search each person.

Inside the building, there is another section for the asylum services that is closed with another locked metal gate manned by officers from a private security company.

There, refugees wait again to get thoroughly searched by the private security as well. The militarisation and securitisation of refugee camps are more than apparent here, and it is clear that private interests are profiting from the misery of others.

By the end of this process, all refugees have been fingerprinted and registered to a European Union database.

Once the refugees are registered with the asylum office, they get a number for their case, which is the only way they are identified, and then are assigned a tent or a metal container. After this, they must wait again, until their number is listed on a board in the camp to begin the interview process for asylum in Greece.

For many, this is an endless wait; for a long time the EASO was prioritising only the files of Syrians and some other highly vulnerable cases, leaving non-Syrians in limbo.

The wait in an overcrowded camp with deplorable conditions is especially unbearable. The refugee camps that have sprung up in the past year on Chios are meant to house 1,100 people, but currently 4,000 are housed there (PDF). Understandably, there is intense stress on the infrastructure and services available.

The living conditions in the camps are beyond abysmal: from poor health services, if any, to scarce mental health services, to inedible food rations, to dysfunctional and highly problematic international NGOs.

The makeshift tents and metal containers to which refugees are assigned are also not meant for long-term stay and are often overcrowded, unhygienic and provide little protection from weather and theft.

It is only natural that, in such conditions, tensions among the refugees increase, resulting in regular fights, mostly along ethnic lines.

Refugees are repeatedly put in a position to compete with one another for resources, as well as legal and political processes that have established quotas based on arbitrary definitions of "vulnerability".

Between death and despair

Refugees are essentially imprisoned within the camps and are not allowed to travel beyond the city. If they find themselves outside, they risk not only arrest and detention by the authorities, but also aggression from the locals.

I met a Palestinian-Syrian family who said that their two-year-old daughter was beaten by a Greek man in the small park by one of the camps. The girl was taken to the hospital seeking treatment for the bruises that covered her tiny body. The police, they say, did nothing to help her.

The recent protests are only some of many that have taken place across Greece over the past several months. Many of the Greek anti-refugee protesters are associated with the country's growing ultra-nationalist Golden Dawn party, which has been encouraging xenophobia all over Chios and surrounding islands.

These dynamics between the local population and the refugees are not devoid of context. Greece is a periphery EU country, in the midst of one of the worst financial crises in its recent history.

That it is expected to bear responsibility for one of the worst refugee crises in world history would be laughable if the situation were not so tragic.

The borders to other European countries remain closed, thus putting great stress on Greece and creating a bottleneck for all migration to Europe.

This endless uncertainty and fear of what's to come are the hardest to endure, especially when conditions within the camps continue to worsen.

Many give up on waiting the endless wait and resort to human smugglers. People are so desperate that even stories of organ trafficking and deadly treks across militarised borders do not keep them from finding alternatives to the dismal conditions in Greece.

This is our global heart of darkness. The lives of others continue to be relegated to the absolute margins of society, where they are left to languish in despair, where death is welcomed as the only alternative to the pain and misery of the daily conditions they face.

The world is witnessing the greatest displacement of people since World War II, in addition to the complete destruction of some of the oldest and richest civilisations on earth. Has Europe failed in the preservation of human dignity and relapsed to a historical period it vowed would never be repeated? And to what end? To preserve a mirage of Fortress Europe?

I fear the worst is yet to come.