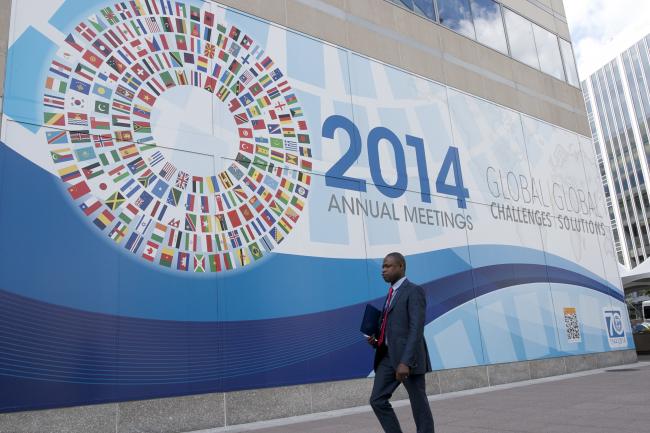 In its Doing Business Report 2014, the World Bank Group asserted the goal of its "Doing Business" project is to end global poverty and create shared prosperity for all through investments in agriculture, and to deliver a body of knowledge that allows economies to track progress overtime and with respect to each other in the development of building blocks of a good business environment, [which] is crucial for the creation of a more prosperous world, with increased opportunities for everyone.” However, the premise and proposal of Doing Business ignores the reckoning impacts of the structural inequality of enforcing market-based policies on governments of poor and less advanced economies. As evidenced by the experiences of Global South countries that forced to implement Structural Adjustment Programs (SAPs) in the 1980s, Doing Business (DB) ranking reinforces similar material condtions that would lead to similar unfavorable outcomes. DB is about compliance and submission to a body of rules and conditions that are presented as self-evident norms for proper governing of an economy as a pre-condition for any country to achieve economic growth and prosperity.

Among these norms is the creation of “friendly” conditions for foreign direct investment to be injected into national economies, which in turn would help poor countries deal with economic challenges that intensify poverty and hinder economic growth. This narrative is similar to the SAPs orchestrated by the International Monetary Fund (IMF) and World Bank in the 1980s. 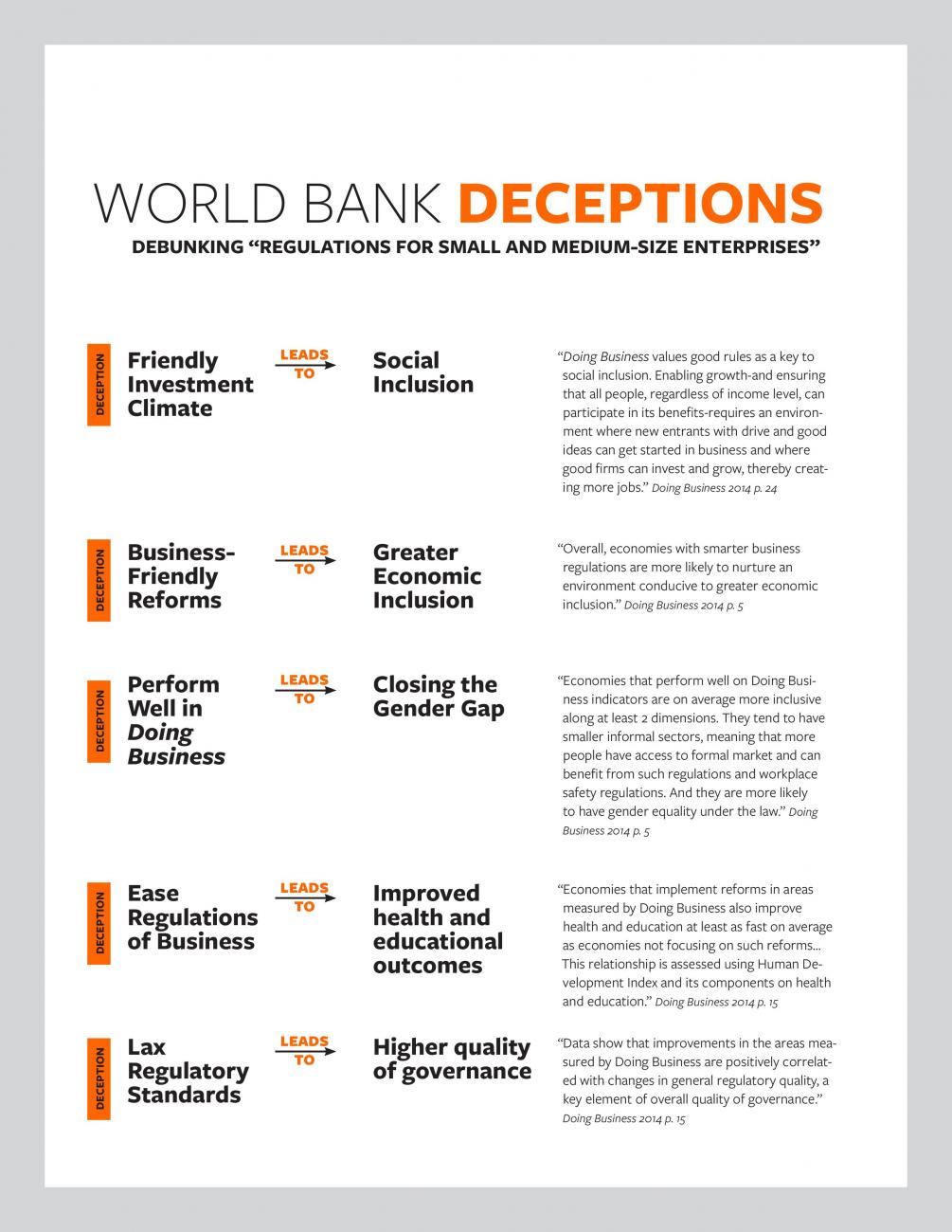 Given the history of both World Bank and IMF, it is not premature to assume that comparable outcomes of SAPs will emerge from Doing Business. The structure and mechanisms of a neoliberal policy proposal have been repackaged and pushed upon governments of the Global South in the name of better outcomes in social and economic inclusion, improved health, education and gender equality, and higher quality of governance. The similarity of this package to World Bank’s SAPs is striking, given that such programs urged countries to carry austerity measures in the name of controlling inflation and creating prosperity. This logic and mechanisms of Doing Business, however, are set to classify countries and economies based on their capacity to open-up their national economy for financial capital and enact loose business regulations to attract foreign direct investment.

Rushing to impose a “friendly business climate” under the pretext of attracting foreign direct investment, the World Bank imposes serious challenges to economies of the Global South countries to succeed, especially in terms of the financialization of agriculture sectors. Additionally, the economic interests of international finance institutions of loose business regulations coupled with the influx of foreign direct investments is further enables financialization to reshape national economies in the Global South, subjecting them to the brutality of global finance. For example, the continuous waves of large-scale land deals (more than 220 million hectares have been acquired between 2006-2011 that plague Global South countries, particularly Africa) came as an explicit expression of the “restructuring of developing countries’ economies” during SAPs era.

Given the scale and inevitable outcomes of Doing Business ranking, it is imperative to emphasize the economic, political, environmental, and social consequences that will negatively impact small and family farmers, devastate labor relations, and intensify dispossession of rural communities in many of the countries who score high in DB ranking. By taking a quick glimpse at the top 10 countries and comparing their achievement in the Human Development Index (HDI), one reality emerges: the DB logic is flawed, with few exceptions, as almost all of the 50 countries that made it into the list of “narrowing distance to frontier” are doing poorly in their human development achievements. Furthermore, Doing Business claims that there is a direct correlation between social and economic inclusion and accelerating a friendly investment climate to attract foreign direct investment. However, by examining the human development achievements of countries that score high in the DB ranking, the reality paints a completely different picture. For example, Rwanda—which scored high in DB and acquired the first place among the top 50 economies in the “narrowing the distance to frontier” and ranked 32 overall in DB ranking—remains in the 151st place in their human development achievement (see graph below). 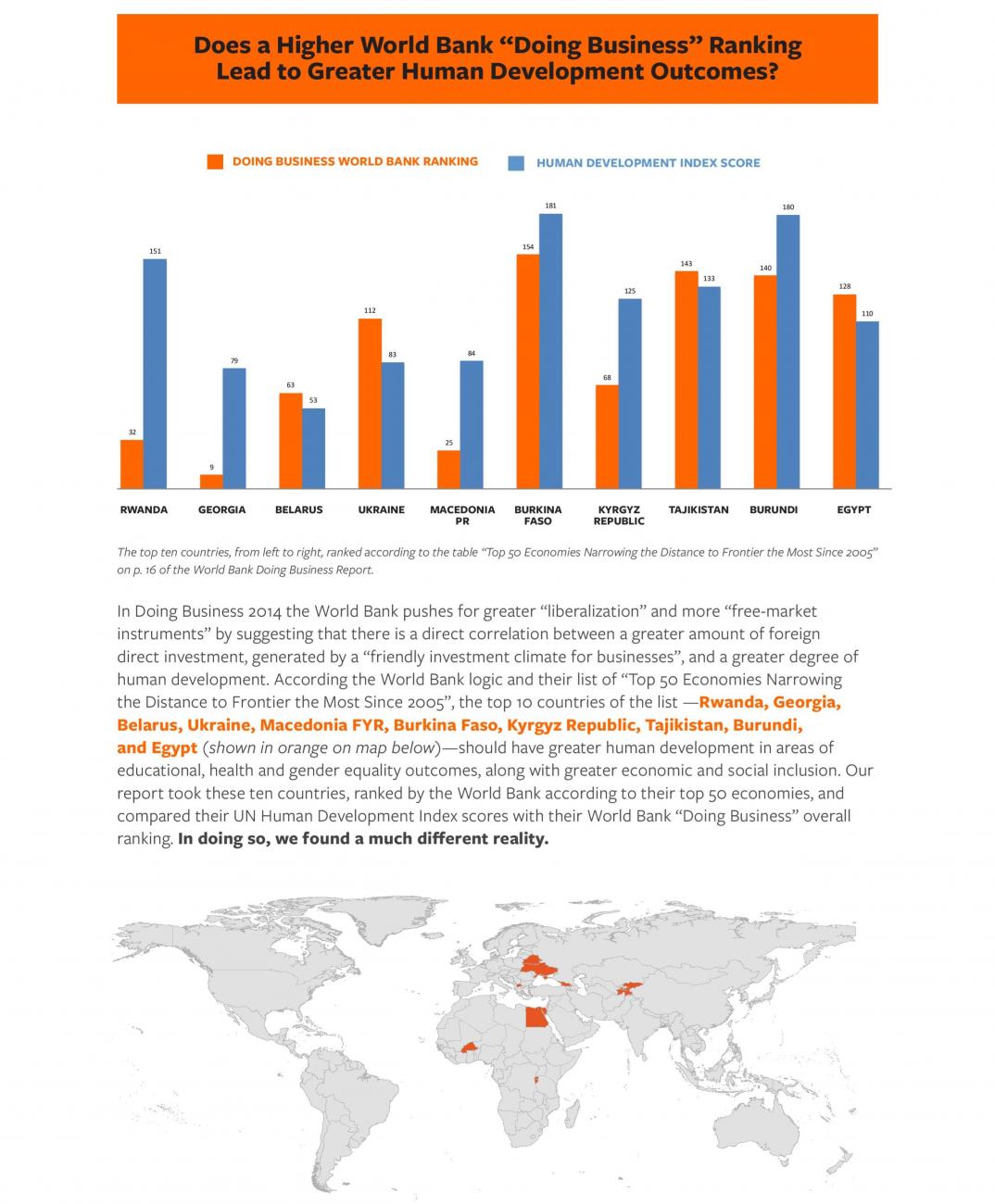 In this context, any serious attempt to tackle the challenges of poverty alleviation and create sustainable economic growth must understand that the flaws stem from the structural arrangements of a global economic system that is guided by unregulated neoliberal policies under the banner of “developing innovative products for good governance” of the World Bank Group. Hence, the goal of improving the quality of governing institutions in the Global South does not rest in whether market mechanisms are intact and efficient; rather, it relies upon reversing the historical patterns of an asymmetrical global trade system and its practices, often imposed by international financial institutions and backed by powerful countries in the Global North. These patterns have contributed to large structural inequalities that have led to the current global waves of poverty and inequality in the twenty-first century.