BERKELEY, CA: The Haas Institute for a Fair and Inclusive Society at UC Berkeley on Monday released the first in a series of maps and web reports that depict the levels of racial segregation across the San Francisco Bay Area, down to the neighborhood level.

As a whole, the Bay Area is roughly 39 percent white, 26 percent Asian, 24 percent Latino, 6 percent Black, and 5 percent "other," including Native American, Pacific Islander, and multi-racial. Yet, as the maps show, very few neighborhoods or municipalities reflect that level of diversity. 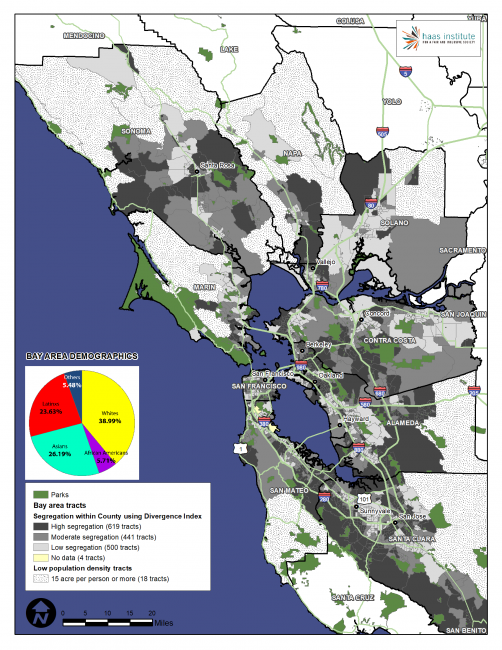 While indeed one of the most diverse regions in the country, the data revealed that the San Francisco Bay Area features a tremendous amount of racial segregation with historical roots going back generations. Every part of the Bay Area contains racially-segregated communities, but the levels and nature of the segregation can vary widely from county to county.

“Using a unique but powerful measure of segregation, we are able to measure segregation for a very diverse, multi-racial environment,” says lead researcher Stephen Menendian, also the Assistant Director of the Haas Institute.

While other maps have been constructed that show the demographic makeup of Bay Area cities, the Haas Institute's new segregation maps are the first that illustrate residential racial segregation itself for multiple racial groups simultaneously within the Bay Area by comparing the racial composition of neighborhoods to the composition of the Bay Area region as a whole.

Whereas maps that merely show demographics can be misleading by appearing that cities may have achieved integration based on numbers alone, the segregation maps show that even diverse cities can be highly segregated if those groups are concentrated in different parts of the city.

By revealing which cities and neighborhoods are experiencing the most severe cases of segregation, the maps may serve as a tool for organizers, researchers and policymakers to better understand the problem, and advance policy and advocacy discussions on how to mitigate or ameliorate the problems caused by segregation.

The researchers were also able to examine the more than 100 cities in the Bay Area by looking at the racial demographics in those communities using data from the 2010 Census, and the 2015 American Community Survey.

It finds a large number of racially-segregated, white affluent suburban and exurban cities are able to maintain their segregation through a variety of land use policies. Similarly, it finds that many of the largest, urban cities are diverse, but segregated by neighborhoods. 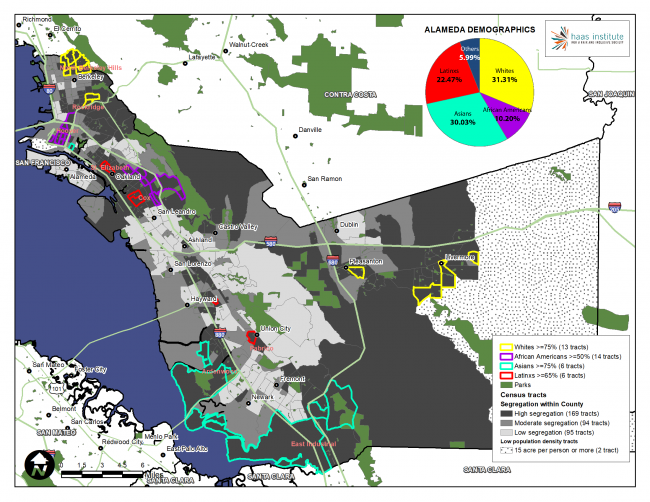 For example, while the city of Oakland is exceptionally diverse (27 percent white, 15 percent Asian, 28 percent Latino, 23 percent Black), it contains some of the most segregated neighborhoods in the Bay Area. As the map to the left illustrates, African Americans in particular are racially segregated in the eastern flatlands of Oakland and west Oakland, while the Oakland hills are disproportionately white.

As the Institute will show in future reports in this series, the patterns of racial segregation that exist are a product of historical forces and policies that maintain and perpetuate segregation.

The maps and accompanying web report can be accessed on this page.