Although our study was focused on neighborhoods (census tracts) and regions (Metropolitan Statistical Areas and counties), we separately examined city-level segregation in an addendum. In that addendum, published in November of 2020, we ranked every city in the Bay Area from most to least segregated internally and in terms of segregation from the surrounding region.

Using the recently-released 2020 Census data, we now update these findings and lists. In addition, we rank the top 10 most segregated neighborhoods in the Bay Area for every major racial group. This is the first time we will have presented this analysis (although we identified specific racial concentrations in Part 2 of our original series).

To contextualize this information, we report that, according to the 2020 Census, the nine-county Bay Area region is 36 percent white, 28 percent Asian, 24 percent Latino, 6 percent Black, and 6.5 percent “other,” including American Indians and Alaskan Natives (AIAN), Native Hawaiian and Pacific Islanders (NHPI), and multi-race populations. 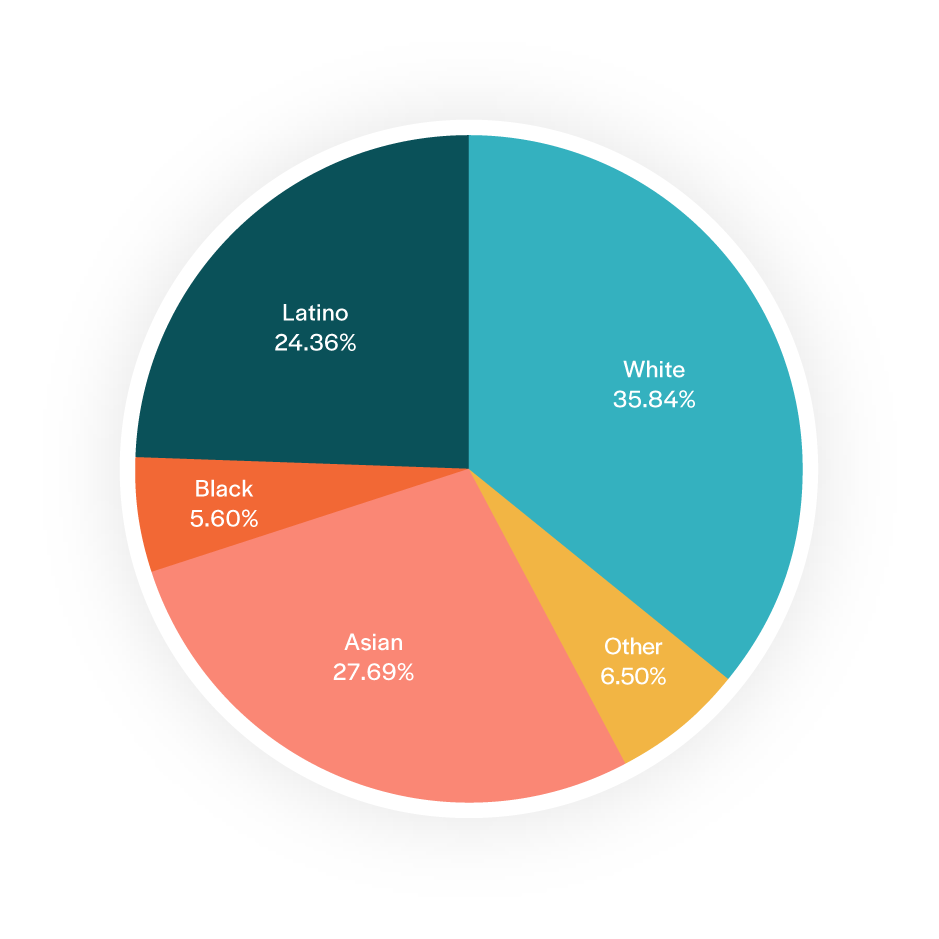 ​​​Figure 1: The Racial Composition of the nine-County Bay Area in 2020

Like most of the country, the Bay Area's racial demographics and residential patterns continue to evolve. Figure 2 below is a map that illustrates changes in the "divergence score," our preferred measure of segregation, across the Bay Area from 2010 to 2020. Light blue areas show relative declines in racial residential segregation while red shades show relative increases. 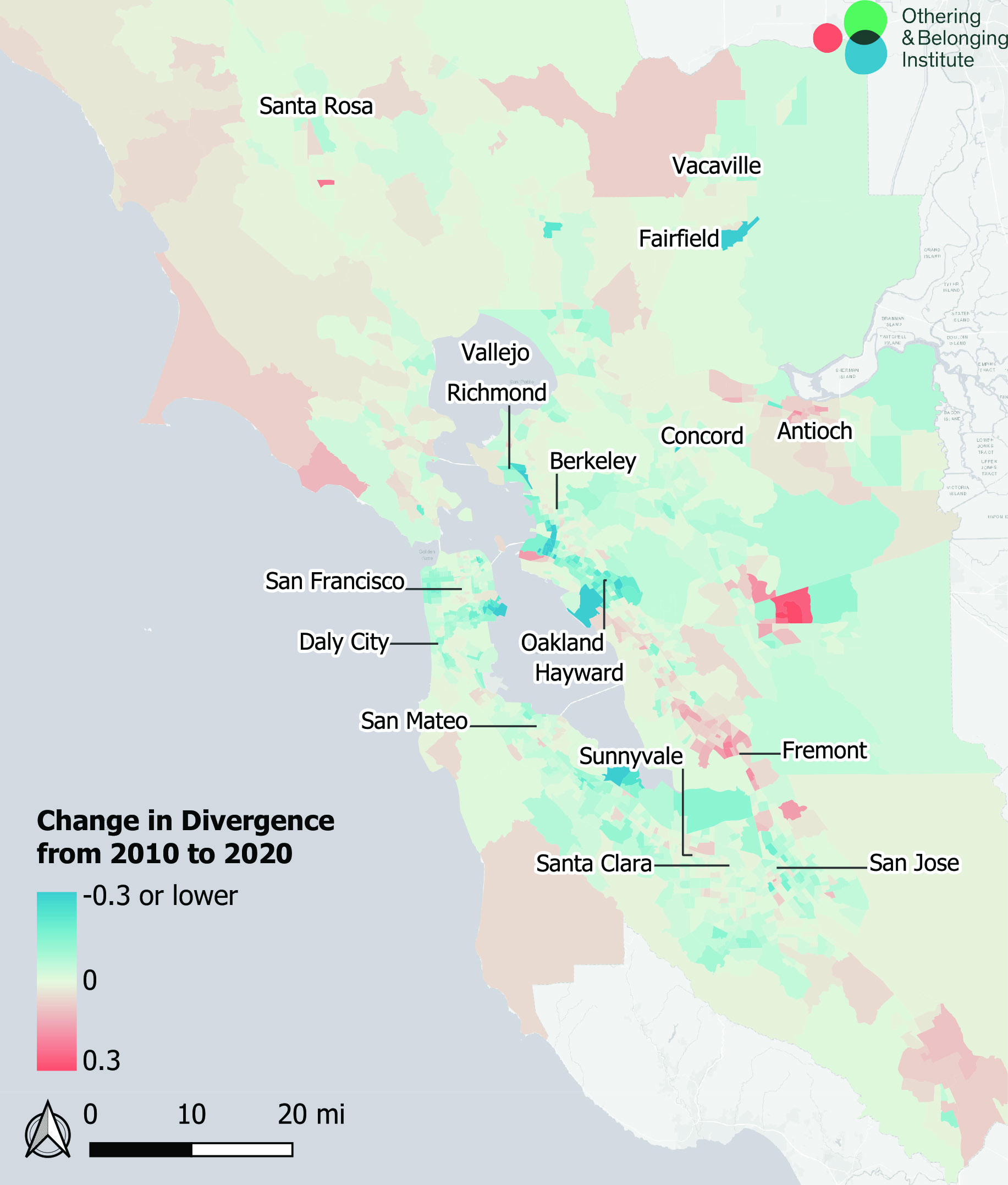 In Part 3 of this series, we presented tables indicating the change in Divergence Index values over the decades by County as well similar change-over-time maps (specifically, we presented a map showing change in Divergence Index scores from 1980 to 2010). In part 5 of our series, "Remedies, Solutions and Targets," we presented a table projecting the level of racial residential segregation into the future, all the way to 2030. Using 2020 Census data, we now present the updated change, showing county-level divergence scores from 1970 through 2020, in Figure 3 below. 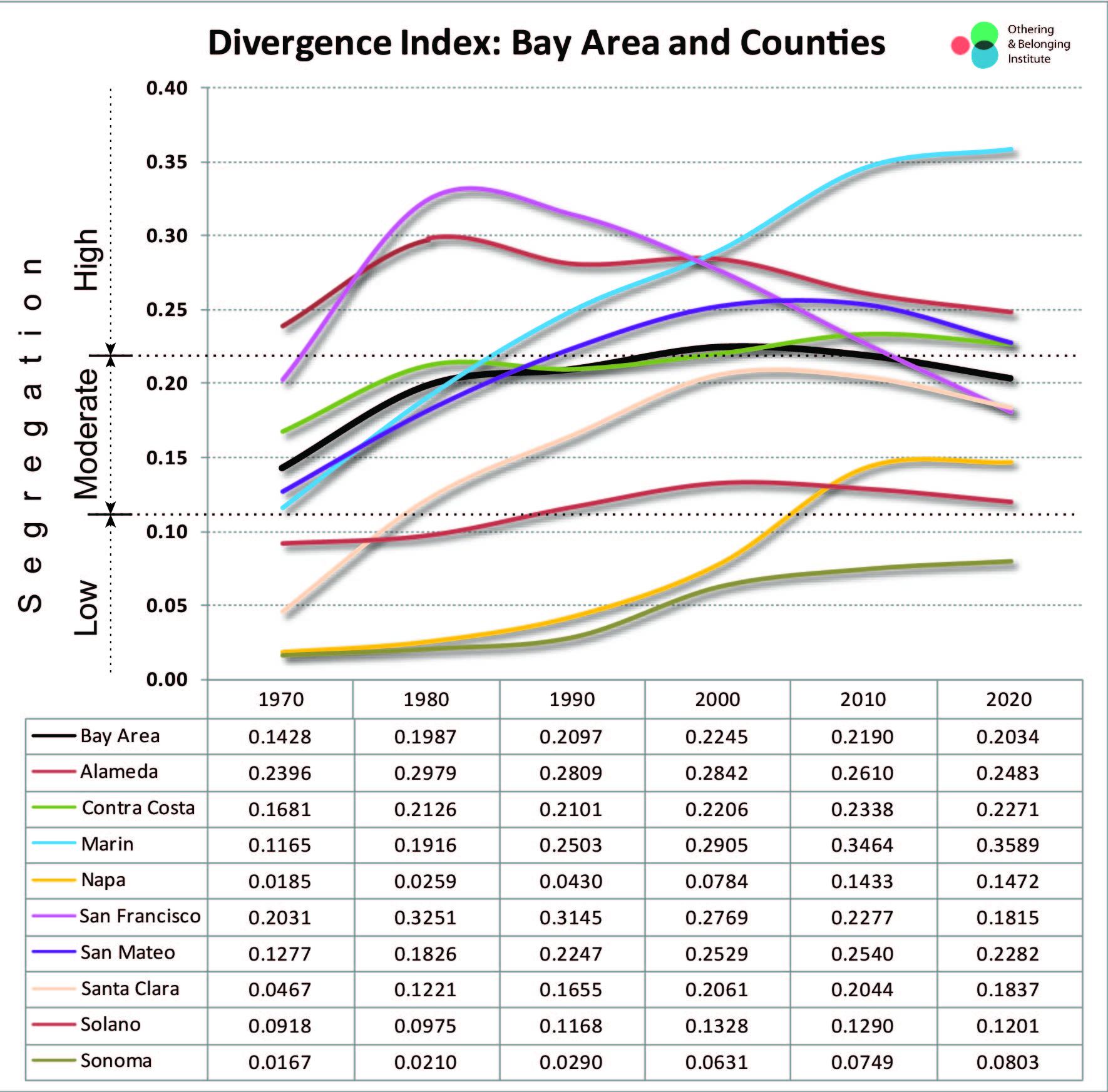 The good news is that, as a region, the San Francisco Bay Area is slightly less segregated as of 2020 than it was in 2010. Not only have overall regional levels of segregation slightly declined, but only three counties are also more segregated as of 2020 than they were in 2010: Marin, Napa and Sonoma. The other six counties had declines in divergence scores. Even better, 5 of the 8 counties for which we made projections and set numerical targets for 2020, 2025 and 2030 (in Table 4 of Part 5) outperformed not only our projections but also the target goals we set, which we argued could be achieved if deliberate desegregative policies, such as those we recommended there, were pursued. Alameda and Santa Clara's divergence scores were not only below projections, but below 2020 targets if such policies were implemented. Solano, Sonoma and Napa's scores were not only lower than projections, but lower than the targets we set for 2020, 2025, and 2030. In each of these cases, either our projections were too pessimistic or efforts towards greater desegregation are succeeding in those counties. Overall, racial residential segregation appears to have peaked around 2000. 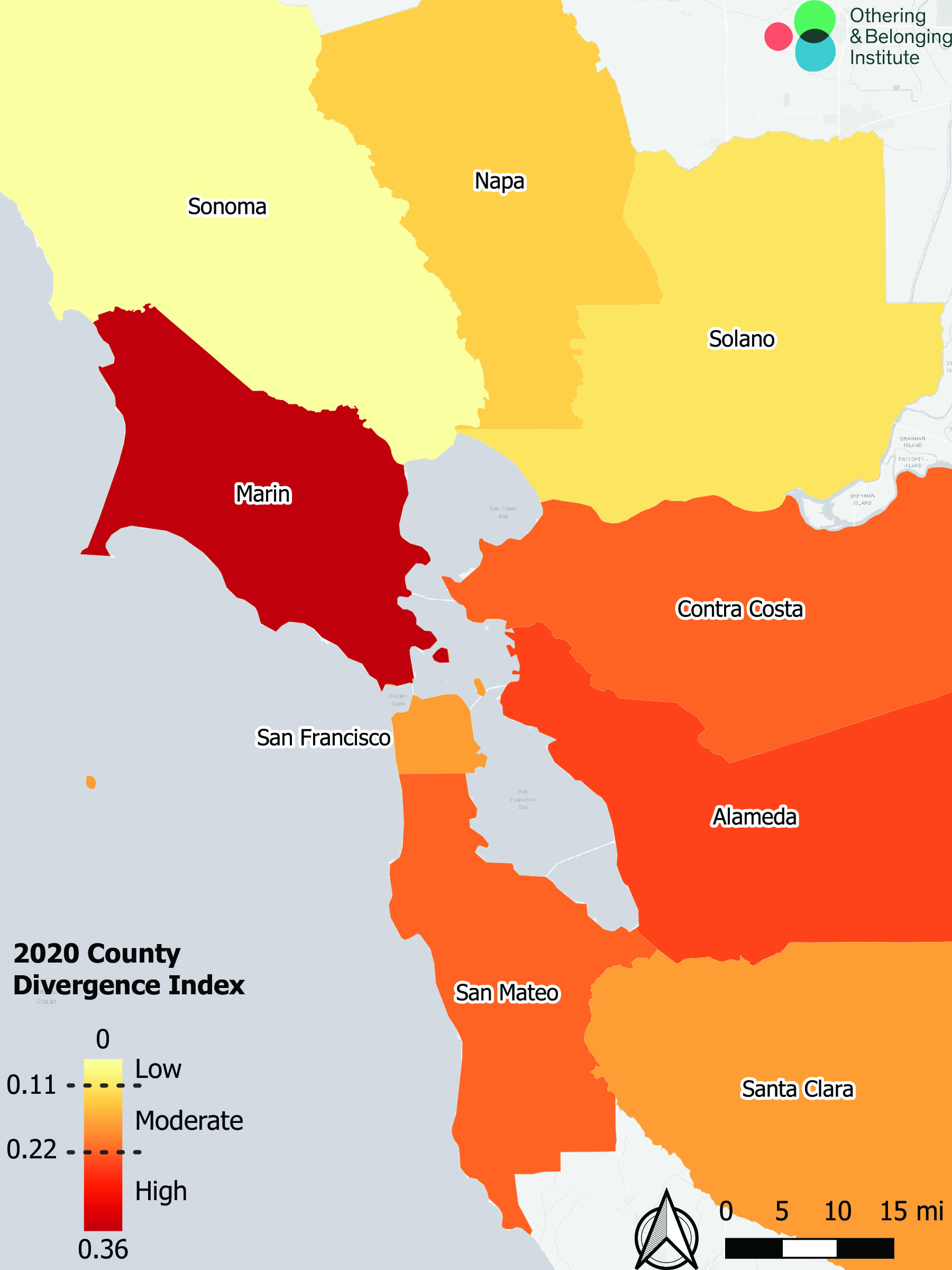 Figure 4: Divergence Index Scores for the Bay Area in 2020.

Finally, we present a time-lapse map in Figure 5, immediately below, in which users can observe these changes from a holistic, birds-eye perspective of the 9-county Bay Area.

The Most Segregated Communities in the Bay Area

Large cities like Oakland tend to have much more neighborhood segregation than regional segregation, since they are so diverse. In contrast, heavily white suburbs or exurban towns tend to have very little internal segregation, but are highly divergent in terms of their racial demographics from the surrounding region.

There are 101 cities in the Bay Area, but this time, our segregation measure excludes those with fewer than 10,000 people, giving us a total of 86 cities we can rank. A complete list, alphabetically ordered, is available for download here.

Here are the top 20 cities with the highest levels of “inter-municipal” or regional segregation in the Bay Area:

Table 1: The 20 Most Segregated Cities in the Bay Area

There are 101 incorporated municipalities in the Bay Area, and so it is a simple matter to rank all of them by their divergence score. Looking at inter-municipal segregation first, which compares the demographics of the cities against that of the Bay Area, we find clear patterns.

Once again, and unsurprisingly, we find that East Palo Alto is the most segregated city in the Bay Area. East Palo Alto was a historically Black community created from redlining and racial exclusion that limited where Black families could live in the region. Although East Palo Alto remains 10 percent Black, in recent decades it has become majority Latino (64.4 percent). It is also one of the more relatively affordable areas in the region. San Pablo, Gilroy, and Richmond stand out as three cities on the list with similar demographics, and an extremely high proportion of Black and Latino residents relative to the region.

In contrast, San Anselmo, Mill Valley, Tiberon, Los Gatos, Lafayette, Orinda, Clayton, and Piedmont all stand out as highly affluent and heavily segregated (and exclusionary) white municipalities, primarily in the suburban fringe of Oakland or in Marin County. These are cities that are more than 60 percent white in a region that is closer to 40 percent white. Most of these cities have fewer than 1 percent Black populations.

Fremont, Cupertino, Daly City, Union City, and to a lesser extent Canyon City and Los Altos, stand out as areas of extremely high concentrations of Asians relative to the region, helping explain why they score so high in terms of segregation. Figure 6, below, is a map of these cities, which illustrates the pattern. 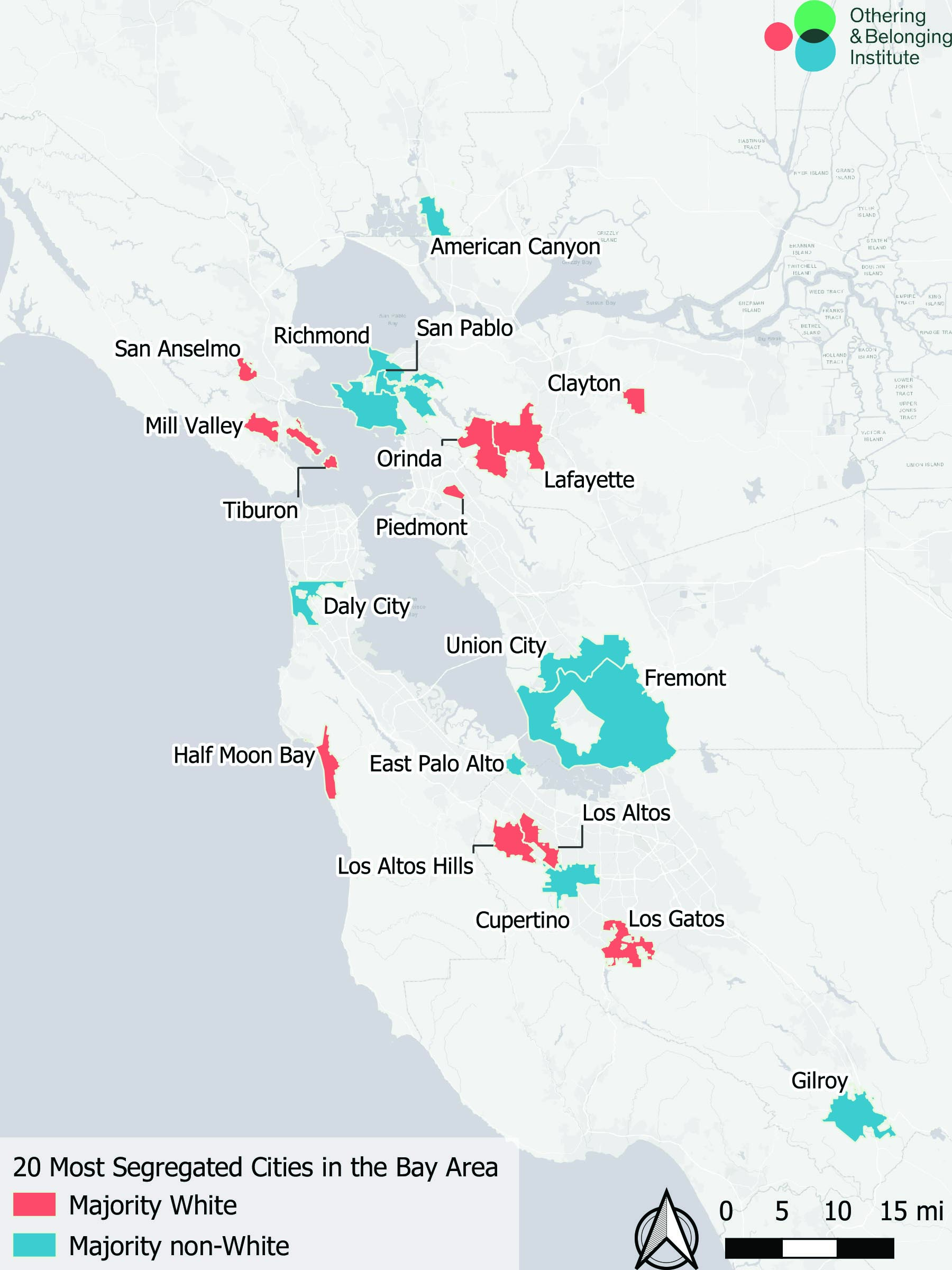 The Most Internally Segregated Cities in the Bay Area

Highly diverse cities tend to be far less segregated from their surrounding region, but can be highly segregated internally. This matters because it means that diverse places can produce racially isolated schools, neighborhoods, recreational areas, and lived experiences. A low level of “divergence” from the surrounding region can thus mask considerable internal segregation.

For that reason, we present the top 10 most internally segregated cities (cities with the highest levels of neighborhood segregation) in the Bay Area, as measured by “intra-municipal” divergence:

Table 2: Cities with the Highest Levels of Neighborhood Segregation in the Bay Area

As expected, this table tells a very different story. Once again, Oakland is at the top, a reminder that the city of Oakland is both highly diverse and extremely balkanized into racially identifiable neighborhoods. The two other largest cities in the nine-county region, San Jose and San Francisco, also make this list for similar reasons, although they are not as extreme as Oakland.

The only city to make both lists, somewhat notoriously, is Richmond, demonstrating how a city can be highly segregated both from its surrounding region, as well as internally between its neighborhoods.

The Most Segregated Neighborhoods in the Bay Area

Understanding the level of segregation visible across our cities and towns is helpful to understand the harmful effects that may be occurring in these places or the policies that may be sustaining this segregation. However, it is also important to understand what is happening at the neighborhood level. For that reason, we present the top 10 most segregated neighborhoods (census tracts) for each of the four major racial groups in the Bay Area.

Table 3: The 10 Most Segregated Black Neighborhoods in the Bay Area

Table 4: The 10 Most Segregated Latino Neighborhoods in the Bay Area

By far the most segregated Hispanic neighborhood in the Bay Area, however, is the Canal neighborhood of San Rafael, a place that is more than 90 percent Hispanic, an enormous concentration for a heavily white county. This neighborhood was found to be highly segregated using 2010 census data as well.

Two neighborhoods in Richmond and two more in Gilroy and East Palo Alto round out the list.

Table 5: The 10 Most Segregated Asian Neighborhoods in the Bay Area

Although Asians (especially Chinese and Japanese) were historically segregated by law and custom in the Bay Area, this list tells a very different story than the preceding two tables. Unsurprisingly, both San Francisco and Oakland’s Chinatowns appear on this list (with San Francisco’s Chinatown taking the top spot), but most of these neighborhoods are located in suburbs, not ethnic enclaves. Fully half of them are located in Fremont, a suburb in southern Alameda County. These tracts highlight the demographic shift since 2010 where four tracts each were in Alameda and San Francisco counties, while two were in Santa Clara County. With six highly segregated Asian neighborhoods in Alameda County in 2020, and one in Napa County, the segregation pattern points to changing demographics within the Bay area.

Table 6: The Top 10 Most Segregated White Neighborhoods in the Bay Area

Once again, a clear pattern emerges. Eight of the 10 most segregated white neighborhoods are in Marin County, the overall most segregated county in the Bay Area. They are not, as one might have expected, in Napa, Sonoma, or Solano, the more rural and exurban counties in the Bay Area. In fact, the other two neighborhoods on this list are in Santa Clara County, in parts of Los Gatos. Compared to 2010 where half of the top 10 segregated white tracts showed up in Marin County, more tracts now show up as segregated in this county. Subsequently, two tracts in Sonoma County that were highly segregated in 2010 are no longer on the top 10 list.

The Most Integrated Cities in the Bay Area

The persistence of racial residential segregation in the San Francisco Bay Area is an issue that distorts the region’s economic future and long-run vitality. It undermines the life chances of too many families and children, isolating them from the opportunity that is so richly on offer in this region.

But there are some bright spots. Using the novel definition of integration developed for our national report this past June, we identified six cities as “racially integrated,” not simply those with the lowest measured level of racial residential segregation:

Table 7: The Integrated Cities in the Bay Area

The most integrated cities, unsurprisingly, are places that are relatively small or mid-sized suburbs in the Bay Area. Notably, they aren’t concentrated in a single county, but pretty well dispersed across the Bay.

Despite its reputation as a progressive and inclusive region, the Bay Area remains, like the rest of the country, highly segregated. The most segregated cities in the Bay Area are those that are either historically places where people of color were permitted to live, when locked out of other places, or are highly exclusionary and heavily white mid-sized to smaller suburbs and towns in places like Marin. In contrast, the most integrated places are places where different race people have settled over time, and where the exclusionary mechanisms are either weaker or non-existent.

Click to download an excel sheet with the rankings of all Bay Area cities by level of segregation. Read our multi-part analysis of segregation in the Bay Area here.