The report, the fifth and final installment of the Institute's "Racial Segregation in the San Francisco Bay Area" series, reveals the correlations between neighborhoods with restrictive, singe-family zoning, non-single-family zoning, and their levels of segregation.

Each report in the series, launched in October 2018, focuses on certain aspects or themes of segregation in the Bay Area. This final report deals with solutions moving forward. 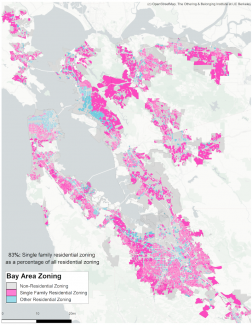 In a first-ever for the Bay Area, the researchers mapped every jurisdiction in the region to show their proportion of single-family zoned housing. The illuminating set of maps of 67 cities across six Bay Area counties shows the regions and proportions of the cities that are zoned for single-family homes, other residential zoning, and non-residential zones.

A quick scan of thumbnail images of the color-coded maps reveals that nearly all the cities' residential areas are overwhelmingly zoned for single-family homes, including denser cities.

The only city included among the Institute's zoning maps which was not majority-single-family zoned was Berkeley, which is zoned 49 percent for single-family homes. Those homes are concentrated in the city's whiter, northern region, as revealed in the map. 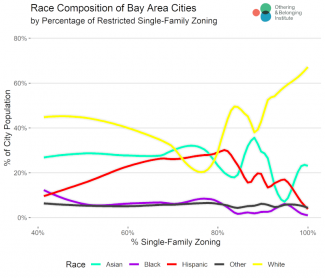 Because single-family zoning is a barrier to lower-income people of color, the report advocates for the loosening of restrictions on multi-unit housing as a first step in a set of remedies to the Bay Area's widespread problem of segregation.

"The prevalence and over-abundance of this type of restrictive zoning is a direct impediment to the development of affordable housing and certain types of housing, including dense, multi-family housing, that make integration feasible and segregation more difficult to sustain," the report states. "Without addressing this problem, an integration agenda is out of reach."

Additionally, the report recommends a set of policies which data shows can promote or preserve integration when properly implemented.

Those include: the adoption of specific rent control and rent stabilization policies depending on the context of an individual city to prevent displacement from integrated communities; mobility strategies that open up predominantly white communities to people of color; inclusionary zoning ordinances and statewide fair share laws that mandate a specific level of economic integration; and affordable housing policies and direct subsidies such as housing vouchers.

One example of a fair share law that could be highly effective if properly implemented and enforced is the Regional Housing Needs Allocation (RHNA) program, which is supposed to require every jurisdiction in the state to plan for housing at different income levels, from very low to very high.

Based on past census data, the report also provides predictions for the levels of segregation in the Bay Area over the next 10 years. Alarmingly, it shows that overall, segregation will continue to rise in the region, as has been the case in most counties over the past several decades.

Using those predictions, the report suggests goals to reverse this trend.

"The Bay Area is on the wrong trajectory," the report warns. "If we can make modest improvements in observed levels of segregation in the next decade, we can set a new trajectory for the Bay Area."