BERKELEY: Hawaii is the most inclusive state in the country, a new study from UC Berkeley's Othering & Belonging Institute finds, followed by Nevada and Rhode Island.

The rankings for 2021, released Tuesday, gave Hawaii the top spot for the fourth consecutive year. Hawaii has consistently ranked among the top four most inclusive states since OBI began publishing its index six years ago.

“Hawaii is a remarkably unique place, not only with the largest multi-racial population in the US, but where race and difference are recognized and respected in a far more nuanced and frankly inclusive way than is typical of the mainland,” OBI Assistant Director and project co-leader Stephen Menendian explained. “There's a lot we can learn from what’s happening in Hawaii.”

For the first time this year the index features an interactive table that allows users to switch between states and countries and sort them based on any of the six social groupings.

“Similar to previous years, users can view how US States or nation-states have performed in inclusivity compared to the last year’s ranking, albeit using the new and improved interactive display,” observes Samir Gambhir, one of the project leads. "In addition to the rankings, users can also dig deeper into each indicator’s input values and its US and global averages using this exciting new tool."

Nevada and Rhode Island also consistently score high in the rankings, along with Maryland, which took the fourth spot in this year's study. 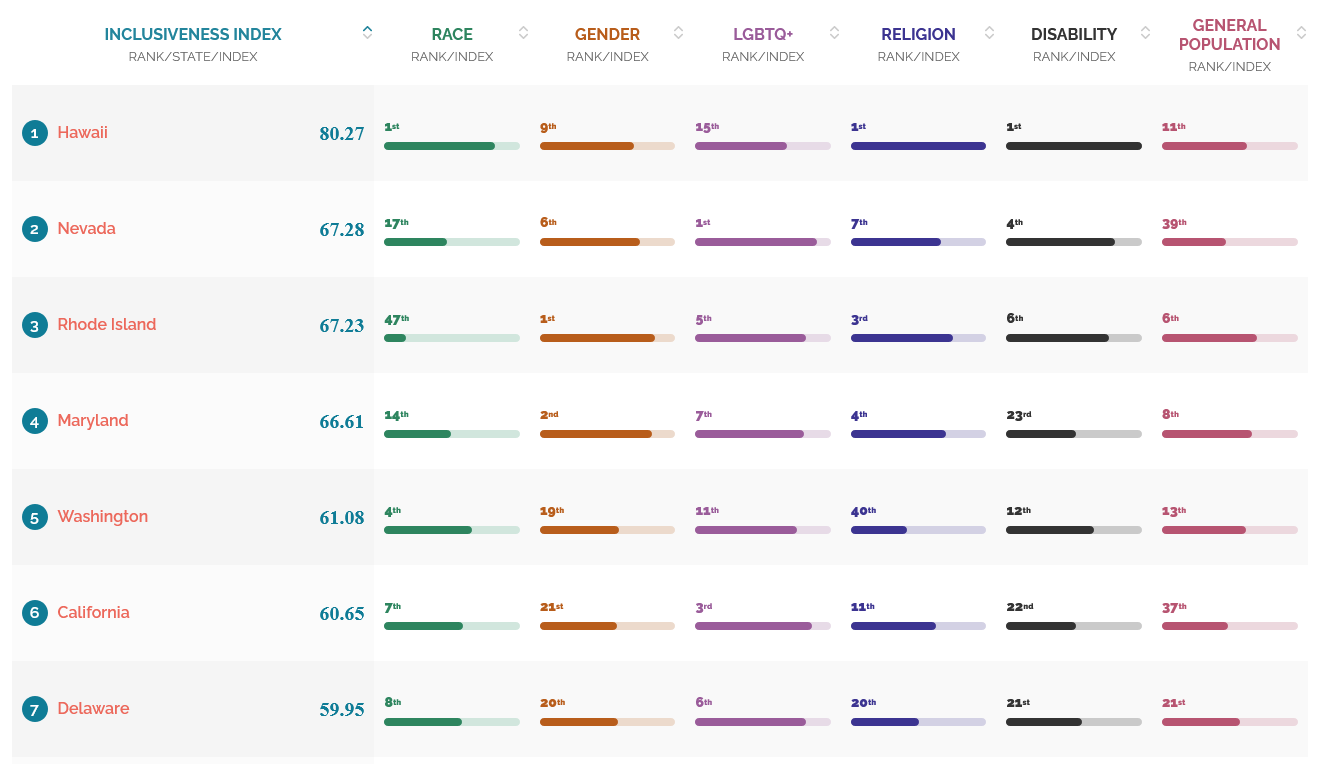 On the other end of the spectrum, Louisiana ranked 50th, followed by South Dakota and Mississippi. These three states also consistently rank poorly in the annual index.

The index rankings reflect the effects of past policies, rather than when a policy was passed or enacted. This may take months or years to be reflected in the data.

This means that the spate of book bans and restrictions on teaching race in many Republican-led states witnessed in recent months are not represented in the current rankings.

Our Inclusiveness Index differs from other well-known global ranking systems in that it focuses on the inclusivity and marginality for specific, marginalized groups rather than offering an assessment of the well-being of a country's general population.

Globally, there weren't many surprises either, with most of the same countries ranking in the top and bottom. Among the 133 countries ranked in this year's study, first place went to Sweden, followed by New Zealand and Norway.

However, for the first time since OBI began publishing the index in 2016 the Netherlands did not come in first place. Instead, it ranked just outside the top three, in fourth.

In last place came Yemen, a country devastated by the Saudi-led invasion launched in 2015, and which is experiencing the worst humanitarian crisis in the world, according to the United Nations.

Following Yemen is Iraq, itself still suffering from the US-led invasion in 2003. Angola, in western Africa, ranked third from the bottom, the same spot it held in last year's index.

The United States, per usual, ranked mid-pack, in 72nd place, with a mix of good and poor rankings. The US performs well on inclusion in terms of disability, LGBTQ people and religion, but ranks poorly on race (121st) and gender (125th).