BERKELEY, CA: Vermont, Alaska, and Maine were the three most effective states in responding to the coronavirus pandemic last year, a new analysis by UC Berkeley's Othering & Belonging Institute has found.

The institute created an index to measure the performance of all 50 states and 172 countries primarily based on three factors: rates of infection, death, and testing. 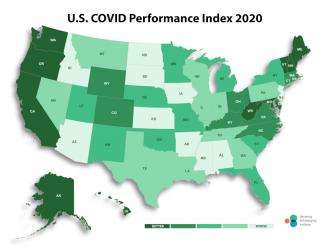 While a host of factors plays a role in how a state or national government gets a handle on the virus, data from these three measures, collected over the course of last year, provide the most objective analysis of the effectiveness of each government's public health policies to contain the spread of Covid-19.

"The most effective states appeared to be those that carried out strong public health measures grounded in science," said Elsadig Elsheikh, co-author of the 2020 Inclusiveness Index, an annual report published by the Othering & Belonging Institute.

On the other end of the spectrum, the state with the poorest response to the virus according to the institute's measures was South Dakota, followed by Iowa and Mississippi.

South Dakota's last place ranking is not surprising, as it famously defied health guidelines set by the Centers for Disease Control and Prevention to mitigate the spread of the virus, including by refusing to issue a mask mandate. For a period in late 2020 the per capita death rate in South Dakota from the coronavirus was the worst in the nation.

A general trend revealed by the data shows that state governments which were more aggressive in issuing mask, shelter-in-place, and physical distancing rules fared better than the ones which did not.

Globally, out of the 172 countries in the index, the three most successful responses to Covid-19 came from the United Arab Emirates, Denmark, and Iceland. Other successful countries that were profiled in the report include New Zealand, Vietnam, and Rwanda. These countries each responded quickly and aggressively after the pandemic struck with contact tracing, testing, and isolation of cases.

The United States, then led by President Donald Trump who famously and repeatedly undermined public health officials and downplayed the seriousness of the pandemic, scored a ranking of 161, putting it in the bottom six percentile of the scale. Brazil and the United Kingdom, two countries with right-wing governments that also downplayed the pandemic, were also near the bottom of the scale, scoring rankings of 155 and 141, respectively.

The data used to rank the states and countries does not reflect vaccination efforts, since those were not undertaken on any large scale until 2021. Vaccination may be included as a measure in future reports.

The addition of a separate index on Covid-19 responses in this year's Inclusiveness Index complements the findings gathered using the traditional methods for the report.

The traditional inclusiveness measures listed above are designed to scrutinize how governments protect and accommodate the needs of marginalized people. A failed response to Covid-19 placed extra burdens on non-dominant groups in each state and country because of the widely reported disproportionate impacts of the virus on elderly people, people with disabilities, people of color, and poor people.

“The Covid-19 pandemic produced stark disparities by race, age and other demographics that reminded us of the vulnerability of certain marginalized communities as well as inequalities in health care access and policy. Our Covid Index and analysis confronts this reality,” co-author Stephen Menendian notes.

Interactive map shows regular (non-Covid-19) rankings of countries and states. The map can be set to show data for any year since 2016, when the Inclusiveness Index was launched. Click here to open this map in a new tab.

The findings for the traditional index (without Covid-19-related data) at the state level in this year's report put Hawaii at the top of the list for the third straight year, followed by Maryland and Rhode Island. Florida, which passed a ballot initiative in 2018 that went into effect the following year to expand voting rights for formerly incarcerated persons, rose to ninth place in this year's index, up 13 spots from its previous ranking.

The index rankings reflect the tangible outcomes of policies, not just when a policy was passed or enacted. This may take months or years to be reflected in the data, which explains why Florida's ranking rose in the 2020 index, and not in a previous report.

For that reason this year's report does not profile the impacts of any state or federal policies taken in response to the summer-long protest movement demanding racial justice and police accountability following the murder of George Floyd. These developments will likely be reflected in future reports.

"Despite these lagged effects, the data available for the selected indicators is robust enough to provide a comprehensive understanding, and subsequent ranking, of inclusiveness as well as COVID-19 outcomes for all US states and nation-states for the year 2020,” explained Samir Gambhir, another coauthor of the study.

The bottom three states in this year's index were South Dakota, Lousianna, and Wyoming. Connecticut saw the sharpest decline in ranking over the previous year, sinking from 26 in 2019 to 47 in 2020. This is primarily due to an increase in income inequality between disabled people and the general population.

Vermont also significantly declined in ranking over the same period, from 5 to 23, due to income inequality for women.

Globally, the Netherlands came in first place, as it has in every Inclusiveness Index report released by the institute since the first one was published for 2016. New Zealand came in second place, and Sweden in third.

At the bottom of the list is Iraq, followed by Morocco, then Angola. Most countries listed in the index (117 out of 134) held the same rankings they had in 2019. 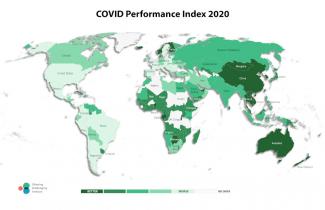