The Road Not Taken

Housing and Criminal Justice 50 Years after the Kerner Commission Report 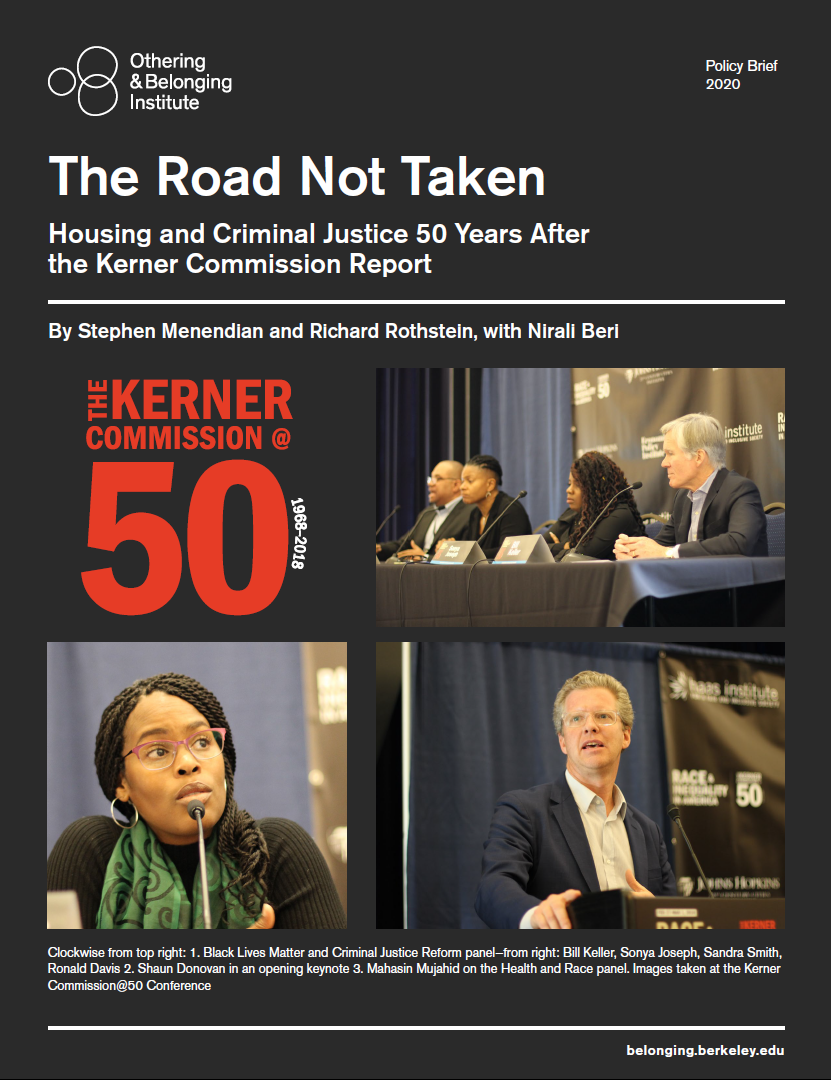 In 1967, President Lyndon B. Johnson appointed a bipartisan commission and charged it with analyzing the underlying causes and conditions that led to over 150 race-related riots during that summer. The Kerner Commission sent field teams to cities that had experienced race-related uprisings to interview residents and conduct detailed demographic and sociological analyses. In a more than 600-page report, the Commission constructed 10 “profiles of disorder” that examined each city’s media and police response to the unrest, and the historical conditions that created neighborhoods of racially concentrated poverty.

Many of the important Kerner Commission recommendations to address systematic inequality identified in the 1960s were subsequently ignored due to the cost of the Vietnam War, which absorbed federal discretionary funds and sapped the Johnson administration’s political capital. A backlash to the civil rights movement also made substantial policy reforms politically unattainable. Although in some respects racial equality has improved in the intervening years, in other respects today’s Black citizens remain sharply disadvantaged in the criminal justice system, as well as in neighborhood resources, employment, and education, in ways that seem barely distinguishable from those of 1968.

In the spring of 2018 the Othering & Belonging Institute (then known as the Haas Institute for a Fair and Inclusive Society), in partnership with the Economic Policy Institute and the Johns Hopkins University’s 21st Century Cities Initiative, hosted “Race and Inequality in America: The Kerner Commission at 50,” a national conference to review and commemorate the 1968 Kerner Commission Report, whose ominous warning stunned the nation: “Our Nation is moving toward two societies, one black, one white–separate and unequal.”

Watch a video recap of the conference above

The conference examined the history, legacy, and contemporary significance of the Kerner Commission. More than 30 experts in the realm of housing, education, health, and criminal justice convened in Berkeley to investigate why so few of the Kerner Commission’s recommendations were implemented, and how we might envision a similar and equally bold policy agenda for this moment.

This report memorializes key findings of the conference, focusing on two issues that the Kerner Commission addressed—policing and housing—to gauge what progress we have made toward advancing the recommendations made by the Commission and to examine where we have fallen short. This report is comprised of:

Part I: Then and Now
A 1968 to 2018 comparison of various measures of racial inequality in the US.

Parts II and III: Criminal Justice and Housing
An investigation of two major, related systems that continue to reinforce segregation and inequality: criminal justice and housing. We highlight the 1968 Kerner Commission policy recommendations that remain relevant, and build upon these to address additional changes that the passage of time has made urgent.

Part IV: Conclusion
A recap of the main findings of our research into the “then and now” and of the social realities faced by African Americans in the areas of policing and housing. As Haas Institute Director john a. powell noted in his introductory remarks at “Kerner Commission at 50,” the Kerner Report was the “‘road not taken,’ but the road is still there.”