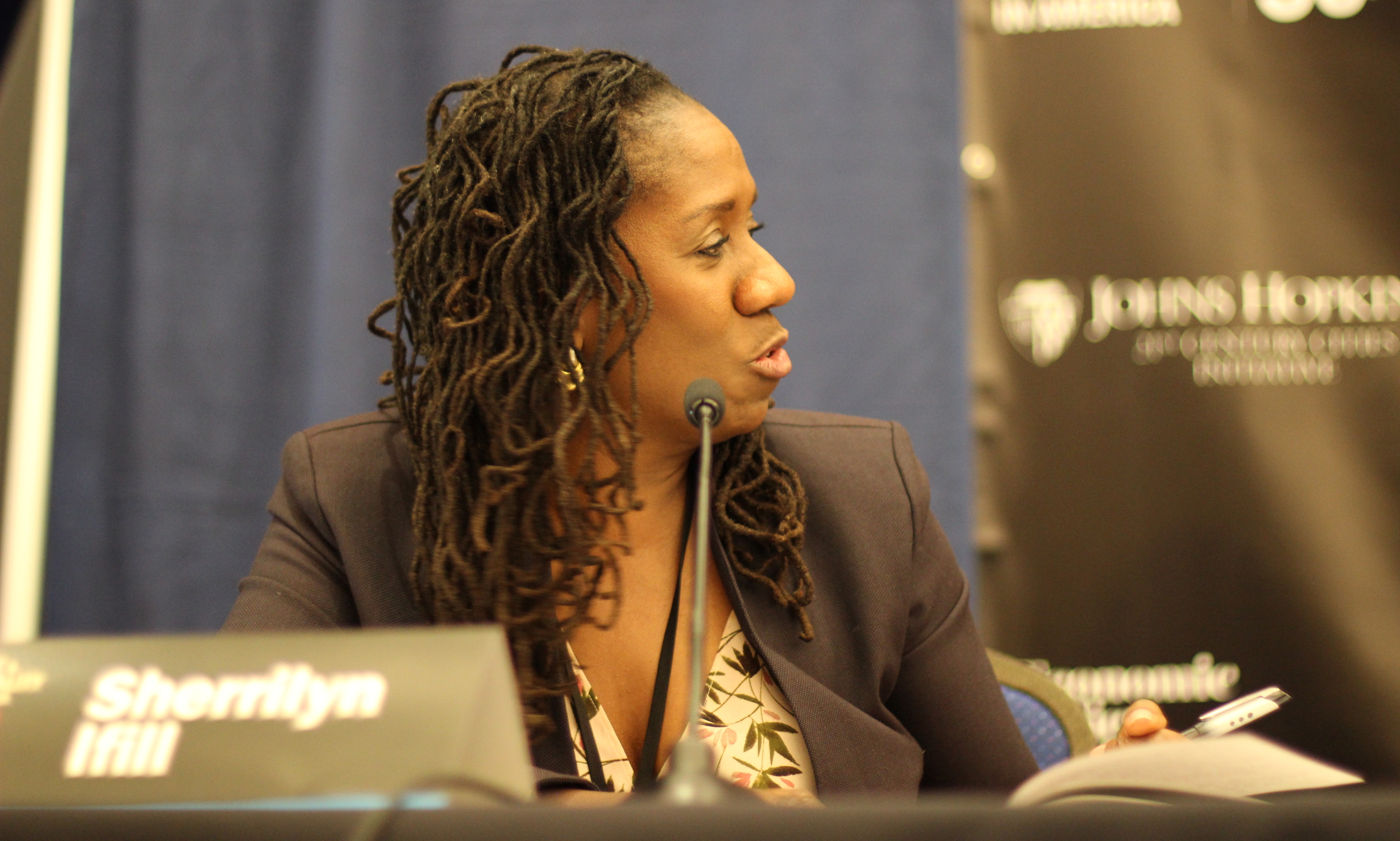 The following are excerpts from six original articles featured in the January-March 2018 edition of the Poverty & Race Research Action Council newsletter authored by speakers and panelists who took part in the "Race and Inequality in America: The Kerner Commission at 50 Conference," as well as three abridged transcripts from keynote speeches delivered at the conference. The full articles can be found in the newsletter here.

Featured pieces in the newsletter include:

Reflections on Kerner at 50: Introduction
By Stephen Menendian & Richard Rothstein

Fifty years ago the nation confronted a historical choice, but did not act. In 1968 a special commission—established by President Lyndon Johnson to investigate why uprisings broke out in more than 100 cities the previous year—warned that America was hurtling down a destructive path: “Our nation is moving toward two societies, one black, one white—separate and unequal.”

“To pursue our present course will involve the continuing polarization of the American community and, ultimately, the destruction of basic democratic values.”

In its dramatic report, the National Advisory Commission on Civil Disorders, led by Illinois Governor Otto Kerner, placed the blame for the 1967 uprisings squarely on public and private racial discrimination. As the report explained, racial discrimination in housing, employment, health care, policing, education, and social services locked too many black Americans into schools, jobs, and neighborhoods that were far inferior to those enjoyed by whites. This generated pent-up frustration in low-income black neighborhoods such that all it took was an “inciting event” to unleash civil unrest.

A Matter of Democratic Survival
By Sherrilyn Ifill

And so you have to be constantly reading. If you're doing this work and you're not reading some book right now that's helping you think about how you understand equality and equity and race, you're not doing it right. This is a lifelong process and a lifelong discipline of study. In 2007, my book, and the culmination of five years of research was published, called On the Courthouse Lawn: Confronting the Legacy of Lynching in the 21st Century. It centered on the last two recorded lynchings in Maryland, which I learnedabout while I was litigating with mystudents as a professor at Universityof Maryland Law School. We werechallenging the siting of a highway next to a historic African-American community on the Eastern Shore of Maryland, and our research revealed that this was the third time in 60 years that the state had run a highway either directly through or next to this particular African-American community.

Honoring the Promise
By Shaun Donovan

The Kerner Commission report was a remarkable leap forward in at least three ways. First, most importantly, it represented our government stating the unvarnished truth about race relations in our country. In response to three simple questions from President Johnson—What happened? Why did it happen? What can be done to prevent it from happening again?—the Commission leapt straight to the original sin of the American democracy—our tragic history on race. On the very first page of the report, it states, “Segregation and poverty have created in the racial ghetto a destructive environment totally unknown to most white Americans. What white Americans have never fully understood but what the Negro can never forget—is that white society is deeply implicated in the ghetto. White institutions created it, white institutions maintain it, and white society condones it.” This is not an activist speaking truth to power—this is a Commission appointed by the President of the United States speaking truth from power.

Second, the Commission took a leap from those three questions to a vast, comprehensive set of policy proposals. It would have been easy enough, and no doubt politically expedient, to focus on the riots in the narrow sense. But the Commission diagnosed the civil disorders as a symptom of a dangerous and long-standing disease. In the words of Martin Luther King Jr, the report was a “physician’s warning of approaching death, with a prescription for life.” That prescription demanded attacking a broad range of policy areas, from policing and criminal justice reform, to employment, education, welfare, and housing.

Getting It So Wrong, Making it Right
By Sandra Susan Smith

The Kerner Commission Report was courageous and bold not only in diagnosing the root causes of urban unrest throughout the country in the late 1960s but also, importantly, in its prescriptions for change. Not only did the Commission recommend that we undo the racist policies and procedures that created and maintained blacks’ social, economic, and political exclusion, but its members also recommended that we proactively work toward inclusion through unfettered access to high quality education; good jobs; safe and affordable housing; and a fair, compassionate, and responsive welfare system.

These recommendations, however, were largely ignored. In effect, after the Kerner Commission’s calls to effectively dismantle various institutions of racial domination, American society essentially reactivated one not prominent in this role since the post-Reconstruction era. The penal state’s stunning expansion, both in budget and personnel, is rivaled only by the significant and substantial declines in investments in the very institutions the Kerner Commission saw as avenues to social and economic inclusion and mobility—public education, public housing, and public assistance.

While the Kerner Commission Report did not devote a chapter to discussing health inequities, the recommendations in the report indicate that the authors were cognizant of the social and environmental factors that contribute to well-being, and recognized that those factors often disadvantaged African Americans. We argue that racism is a public health issue, and that local health departments have an important role to play in addressing racial inequities that contribute to disparities in health outcomes. All issues—violence, employment, housing, education, and beyond—can and should be tied back to health. Addressing health disparities as a core civil rights issue is a moral imperative, and one that requires us to do so with an eye toward achieving racial justice.

At the Baltimore City Health Department (BCHD), we are tying a number of challenges mentioned in the Kerner Report back to health and racial equity. First, we are addressing educational inequity as a public health issue. An upstream intervention developed by BCHD called Vision for Baltimore aims to conduct free eye exams in Baltimore City Public Schools and provide free glasses to all students, grades K-8, who need them. Before the initiative started, as many as 15,000 to 20,000 elementary and middle school students in Baltimore needed glasses but were not getting them. Students with vision problems often have difficulty focusing in class and fall behind their peers academically, and may become discouraged in class or get in trouble and drop out. We know that if children cannot see, they cannot learn. Thus, we consider Vision for Baltimore as much a public health intervention as it is an educational initiative or an anti-poverty initiative.

Fifty years ago, the Kerner Commission memorably warned the nation of the emergence of “two societies, one black, one white—separate and unequal.” Despite visible positive changes in many areas, America in 2018 has witnessed woefully little net progress—indeed, serious retrogression—in ending two structural problems identified by Kerner as key drivers of our separate societies: segregated residential communities and segregated public education. Despite immediate passage of the Fair Housing Act in 1968 and early HUD efforts to foster integrated public and private housing, and despite remarkable success by federal courts and local school officials to bring black and white school children together during the Green/Swann/Keyes era, the transformation of American residential and educational systems called for by Kerner clearly stalled after the 1980s.

Widespread white backlash has taken several forms, including (1) fierce resistance to residential racial integration ostensibly because of its perceived threat to property values, and (2) a gradual shift from a social emphasis on “equality” as a core school value to the exercise of individual ‘liberty’ and “choice” as principal concerns in children’s schooling. Many presently contend that they would favor greater racial integration for themselves and their children BUT instead must necessarily prioritize their own self-interest. My responsive proposal: find ways to end the dichotomy. It is clearly possible, and this nation should pursue, policies that do not require individuals to choose but instead will reward the exercise of socially constructive choices.

The Kerner Commission report of 50 years ago (The National Advisory Commission on Civil Disorders (1968) was an impressive and prescient document—a historical statement of urgency that in fundamental ways remains instructive today. Much of the report is famous, with phrases we all recognize but might not associate with the report, such as “we are moving toward two societies, one black, one white—separate and unequal.” As the Kerner Commission also wrote: “Segregation and poverty have created in the racial ghetto a destructive environment totally unknown to most white Americans.” These words carry weight in large part because their relevance has not faded— concentrated racial disadvantage is still very much with us.

Although the report’s diagnosis of neighborhood inequality was spot on at the time, its pessimistic view of cities did not anticipate the large-scale changes to come. Cities, rather than suburbs, for example, turned out to be the engines of growth and innovation in the latter part of the 20th century and continuing to the present. Violent crime rates are also at unexpectedly low levels, with cities such as New York rejuvenated and among the safest in the world. No one predicted the future well at the time, however; indeed, the Kerner Commission was in good company.

On the evening of July 27, 1967, my wife and I were gathered with a couple of friends in front of a television in our living room, waiting for President Lyndon Johnson’s nationwide broadcast during which he was expected to announce the appointment of a blue-ribbon citizens commission—what became the President’s National Advisory Commission on Civil Disorders (called the Kerner Commission after its dedicated chairman, Governor Otto Kerner of Illinois). The presidential broadcast was announced in the wake of the riots and violent protests that had exploded in the black sections of many of America’s cities during the “long, hot summer of 1967”—with great loss of life, awful human injury, and enormous property destruction—which caused great shock, fear, alarm, bewilderment, and anxiety throughout the country. The worst of them, in Newark and Detroit, were not quelled until President Johnson dispatched U.S. Army troops.

On that night in July 1967, as we were gathered around the television, my youngest daughter, Laura—who was in second grade at the time—came running in from the kitchen not more than ten minutes before the President was supposed to come on the screen. She said, “Daddy, President Johnson is on the phone for you.” That caused a little stir in the living room. I went into the kitchen, and, standing at attention, picked the phone and said, “Yes sir, Mr. President!” He said, “Fred, I hope you’re going to watch the television tonight.” I said I was. He said, “I’m going to appoint that commission you’ve been talking about.”

History, Origin, and Legacy of the Kerner Commission
By John Koskinen

I was pleased to chair a panel discussion in February on the “History, Origin and Legacy of the Kerner Commission” as part of the symposium held on the 50th anniversary of the Commission's report organized by the Haas Institute at UC Berkeley, the Economic Policy Institute and the 21st Century Cities Initiative at Johns Hopkins. The panelists included Senator Fred Harris, the only surviving member of the Commission, Victor Palmieri, the Executive Director of the Commission and Jay Kriegel, Mayor John Lindsay's liaison to the Commission. Mayor Lindsay was Vice-Chairman of the Commission.

Senator Harris opened by discussing his relationship with President Johnson, who appointed the Commission, and the unexpected, unanimous findings and recommendations made by a group of establishment figures from the private sector and the Congress. The Commission concluded that "Our nation is moving toward two societies, one black, one white—separate and unequal." Equally stark was the Commission's finding that “What white Americans have never fully understood—but what the Negro can never forget—is that white society is deeply implicated in the ghetto. White institutions created it, white institutions maintain it, and white society condones it.”