The Institute’s research agenda prioritizes the most essential components of a healthy life, such as housing, water, food, and belonging. The needs of marginalized communities drive our work to respond to that which is most harmful to our work building fair and inclusive societies, such as the threat of mass incarceration, rising authoritarianism, and our living planet in crisis, and we develop research to help better understand and respond to these realities.

One such example is in our work related to the profound housing crisis in California. In partnership with tenants and communities of color, we have produced research that became a cornerstone of efforts in California to strengthen protections for renters. This research was encapsulated in our Opening the Door for Rent Control report, which emphasized the need to protect renters in the state, especially given the mounting affordability and displacement crisis in California. The report was cited by grassroots leaders, elected officials, and several prominent media outlets as an essential component in influencing public debate around a ballot initiative to adopt statewide rent stabilization and provide just cause for eviction.

Another example of our community-responsive research is work we’ve done related to water equity in Detroit. Our research there described the backroom dealings that transpired in the aftermath of Detroit’s bankruptcy in 2013, where it became clear that water as a resource in Michigan was something that even international creditors viewed as valuable. In partnership with local and community development groups in Detroit, the Institute co-published Water Equity and Security in Detroit’s Water and Sewer District, a report on these issues which included a set of recommendations to ensure water security that would address historical injustices that Detroit’s residents have long experienced. The findings, which were anchored in the Institute’s framework of othering and belonging, spurred the Detroit City Council’s Legislative Policy division to submit some of the report’s key policy recommendations for adoption by the City council.

Research that is not only responsive to needs but is also deeply participatory with communities is a cornerstone of the Institute’s approach. Community leaders in Richmond, California have partnered with the Institute on participatory research projects that have resulted in significant gains in their community, formulating reforms and policy change that solve local problems. A primary illustration of this type of approach was a long-term collaboration between the Institute and residents of Richmond when a large development project was scheduled for the city. Led by UC Berkeley, the project was to create a second campus for the university in Richmond, an initiative that would result in the largest public project to be built in the city since the World War II shipyards.

Community leaders in Richmond reached out to the Othering & Belonging Institute to explore and strategize around what the impact of the massive project would be on their families, their jobs, the local economy, and more. A core set of Richmond community groups formed a partnership with the Institute to develop a strategy for how to ensure the campus could be an engine for social equity, inclusive policies, and well-being for their town. The Institute facilitated trainings, planning sessions, and technical assistance so that community members could be fully engaged in the campus planning and development agreement with policymakers and representatives from the university. A set of findings and recommendations from this work was published with partners in the report Anchor Richmond.

University officials ultimately decided not to move forward in building the new campus, but the momentum created by the Richmond community led to a follow-up initiative to design a platform that would ensure community governance and ownership when it came to future large-scale development projects. This process in turn led to the formation of the organization Richmond LAND (Local Action in Neighborhood Development), which now supports members of marginalized communities to carry out development projects that are grounded in their own needs. In 2018, this group led the design of a plan for a 200-acre city-owned parcel of land, which was ultimately adopted by the City of Richmond and integrated in its Request for Proposals for a developer.

Several pieces of scholarship have come out of this Richmond community work, and have served as tools that have advanced policy change. In 2015, the Institute published Belonging and Community Health in Richmond, an analysis of gentrification and displacement in the city. The report and related community actions garnered significant attention in the media and among elected officials. The following year, Richmond became the first city in California in 30 years to pass new rent control and just cause for eviction policies. In 2017, the Institute published Housing Policy and Belonging in Richmond, a comprehensive analysis of policies related to preventing displacement. The report brings together the work of a Richmond-based fellowship called Staying Power, partner organizations, and additional research and analysis from the O&B Institute, and has been used to develop two new policies in the city (see more about Staying Power in Impact Area 5).

Richmond, California community members and staff of the Othering & Belonging Institute at a meeting on local, sustainable development.

More broadly, the Institute works to equip communities, peer researchers, and the broader public with research and information related to marginalization and inclusion. This includes original research that seeks to better understand general conditions confronting communities or the creation of novel tools for assessing well-being.  A prime example of the type of innovative research is our annual Inclusiveness Index. An original research tool, our Index measures dynamics of inclusion and group-based marginality in the United States and across the globe. Since 2016, we have ranked nation-states and states within the US by their level of absolute and relative inclusivity. Group-based differences the Index looks at include religion, (dis)ability, sexual orientation, citizenship status, race and ethnicity, and gender.

The Inclusiveness Index has become a global touchstone for understanding inclusion holistically rather than on the basis of a single dimension, such as race or class. The Index is unique as an equity instrument in that scores are not dependent on economic conditions, but flow from social standing and policy. Each annual report looks beyond the data to surface global or national trends— for example, the report has provided case studies on the rise in migration, the #MeToo movement, the global water crisis, and the harms of social media.

The Index has been a boon for researchers examining the issue of inclusivity. We have fielded inquiries from locations ranging from Australia to Portugal, with questions about how the model was created and how to incorporate it in other frameworks, including the EURO-Healthy Project model.

Another example of an original diagnostic tool the Institute has developed to assess a broader set of conditions can be found in our Islamophobia Project, which seeks to unmask the various ways in which the pernicious and pervasive dynamics of Islamophobia are influencing legal, political, and social landscapes across the globe. This project developed the first national database of legislation enacted in US state legislatures from 2010 to 2019 that was specifically anti-Muslim or anti-Islamic; a report that shed light on the coordinated and systematic efforts to dehumanize and perpetuate fear of Muslims in the US; and, the Islamophobia Reading Resource Pack, an annotated bibliography that identifies academic publications related to Islamophobia in the United States.

Finally, the Institute’s original research tools include surveys that shed light on community opinion and perceptions of how marginalized groups are situated in our society, such as surveys the Institute designed and conducted in California, Nevada, and Florida through its Network for Transformative Change.  One such instrument was the 2017 California Survey on Othering and Belonging. Produced in collaboration with partners, the survey questioned 2,440 Californian residents about their views on issues related to race, economics, and immigration, investigating community views on identity and inter-group dynamics. A main area underpinning the survey questions was how respondents’ beliefs interact with their attitudes about the role of government. The survey findings underscored the significant progress made toward inclusive values and attitudes in California, but with some participants expressing support for exclusionary policies, it also shed light on threats to inclusive agendas posed by racial resentment and fear. 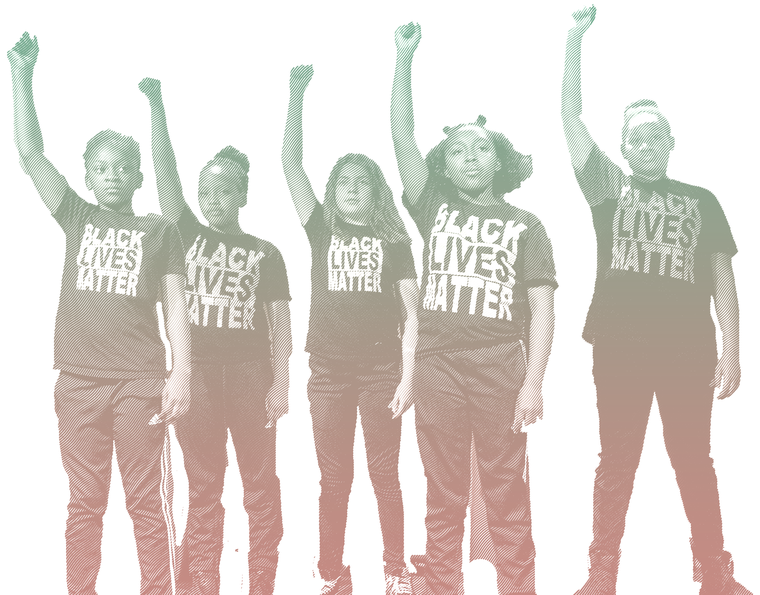 Performers from Destiny Arts, an Oakland-based dance and youth development organization, on stage at the 2015 Othering & Belonging conference 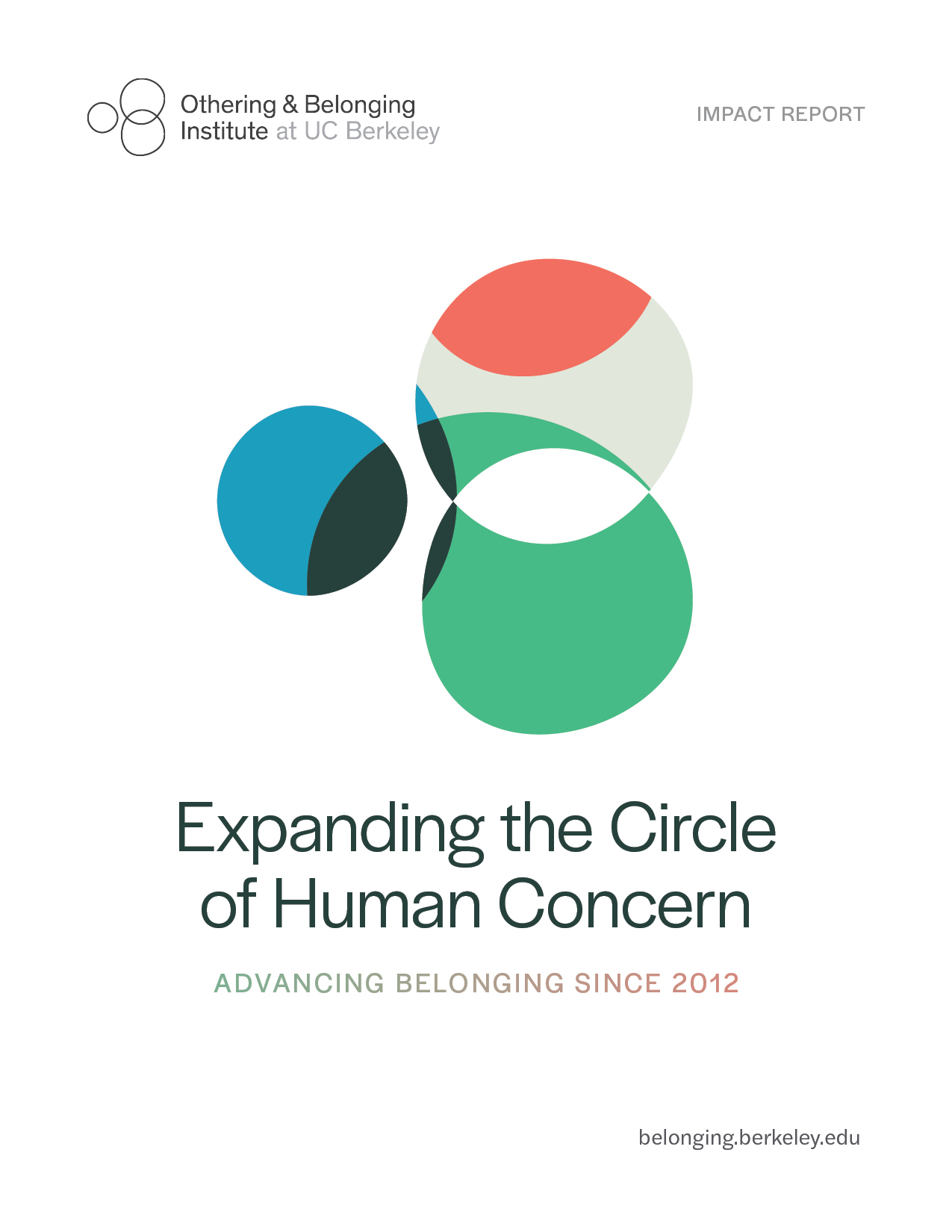 Explore our Five Areas of Impact

The Institute works to equip communities, peer researchers, and the broader public with research and information related to marginalization and inclusion. This includes original research that seeks to better understand general conditions confronting communities or the creation of novel tools for assessing well-being.