It’s not just what the story is, but who tells it: why culture-makers are important allies in narrative change

In the prior sections, we’ve laid out a few of the basic elements of developing a strategic narrative for belonging, including centering structural analyses, acknowledging breaking between and among community groups, lifting up points of potential for collective solidarity, and engaging the expertise of external researchers to question our assumptions and expand knowledge. However, the various components of a narrative make up only one part of the success of that narrative. Narratives and stories alone are not enough: just as important are how the narrative is told and by whom. Artists and culture-makers are perhaps the ultimate bridge between politics and society at large, serving as “cultural translators” who simplify, contextualize, and signal importance to distinct constituencies, particularly when the “idea bazaar” is already so congested.

While traditional social change communications is largely one way—“Here’s our message/argument/ask”—politically informed artistic and creative work is often relational or experiential. It is also deeply personal, encouraging individuals to interpret a work from their own vantage points, identities, backgrounds, and cultural sensibilities. For that reason, it can often be a more potent way to change or engage individuals’ worldviews and consciousness. Indeed, artists and culture-makers engage social justice issues through a different lens than more analytical political or community organizers, opening different paths toward our vision that may have been overlooked or not yet imagined. They play the critical role of exercising the “envisioning muscle” of movements that inspires our work and allows us to see beyond the limits of political calculations. Perhaps most importantly, arts and culture offers us the opportunity to bridge with those who are different, encouraging us to inhabit the viewpoint and perspective of others and consider new ways of seeing.

The question for practitioners, then, is how to engage with artists and culture-makers in a way that informs our analysis, shapes our organizing strategies, and creates cultural expressions of our strategic narratives? 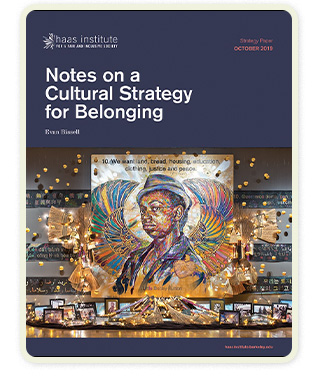 Read "Notes on a Cultural Strategy for Belonging"

This report outlines a strategy centering the leadership, voices, storytelling, practices, and knowledge of people and communities who are marginalized. It offers resources, case studies, and a workshop module for cultural strategies that are rooted in the othering & belonging framework as well as activism and organizing.

In an ideal world, this engagement would begin at the beginning, when we first ask ourselves who should be at the table when developing a narrative strategy. While artists and cultural actors have a long history of working in partnership with and in support of social movements, they are often viewed as an “extra”—only coming in to actualize predetermined narrative strategies or concepts and help us “get the message out.” But artists, cultural actors, and other creatives should be brought into the narrative development process from the beginning and valued for their unique perspectives and cultural expertise that goes beyond the purely analytic logic typifying movement strategy work. Artists can help fill in our own blind spots as organizers, as we make decisions and strategize based on surveys, research, interviews, and countless discussions with peers. This outside vantage point is critical not only for offering alternative perspectives, but also for helping us imagine different ways our narratives might be interpreted and understood, disseminated, and transformed.

Power California’s Cultural Strategy Ambassadors Program exemplifies how cultural strategy can increase impact. In the lead-up to the 2018 midterm elections, this Othering & Belonging Institute (OBI)-initiated project fueled young immigrant artists’ electoral organizing to get out the vote (GOTV) and foster a culture of voting across the region.

At 99Rootz in Fresno, artist Jazz Diaz and dancer Yenedit Valencia collaborated as ambassadors to activate young people from immigrant, refugee, and farmworker families. Diaz made paper by hand, embedding in it the seeds of flowers that grow on both sides of the US-Mexico border. Diaz and Valencia then activated young voters in workshops that combined printmaking, note writing, and traditional Oaxaqueño dance. Over forty young participants came to the workshop, first intrigued by the arts and then exposed to ideas about identity and voting, writing their visions of a more inclusive Central Valley onto the seed paper. 99Rootz members then distributed these few hundred notes to voters in door-to-door voter canvassing.

Diaz and Valencia’s workshops created a narrative of belonging that celebrated the cultural roots of many low-propensity voters in the Central Valley, connecting local culture and identity with broader civic engagement. The workshops also spurred some young people not yet voting age to build their voter identity.

In Orange County, ambassadors Jesus Santana and Alba Piedra led a workshop prompting participants to create flags that envisioned a just and equitable California. The workshop sparked discussion of flag symbolism and how flags reflect land and identity. Santana and Piedra created this project thinking about the loss of land and histories of identity shift in California—from Native American removal to the Treaty of Guadalupe Hidalgo to gentrification today. They also wanted to engage young people who are too often ignored within the conservative Orange County electorate.

Santana and Piedra’s flag-making workshops prompted youth to combine political education, prompting reflecting on the relationship of identity, land, and citizenship and connecting these ideas to claim belonging in Santa Ana through voting, which inspired them to educate participants about the local 2018 midterms. Workshop attendees’ flags were then turned into voter information pamphlets that young members of Resilience Orange County distributed through GOTV canvassing. Young canvassers also asked residents to display the flags in their windows and homes.

Taking local voter mobilization to the next step, ambassadors Yacub Hussein and Haadi Mohamed collaborated with Partnership for the Advancement of New Americans (PANA) to get community members to the polls. Located in a majority Black African neighborhood in San Diego, PANA works to build a visible and powerful refugee electorate. A major challenge toward this end has been a lack of transportation to and from the polls for refugee voters.

Hussein and Mohamed created a voting van offering free rides to the polls. To visualize empowerment and history, the brightly colored vans were decorated with the words “I’m Voting” in Somali, Arabic, Mandarin, Swahili, Vietnamese, Spanish, and English. The van’s rear window donned an image of the ocean shore, visualizing the forced, voluntary, and other kinds of migration history of so many who call California home. Other images on the van’s windows recalled multiracial movements over history: southern civil-rights movement freedom riders, marchers led by Cesar E. Chavez and Coretta Scott King for workers’ rights in California, and recent City Heights protests for expanded citizenship, multilingual access at a local hospital, and living wage efforts.

In collaboration with PANA, Hussein and Mohamed drove neighbors to the polls who otherwise could not have gotten there. As the colorful van picked up and dropped off voters, people in the streets of San Diego got a glimpse of diverse communities and histories, long invisible in the conversation about voting.

These three efforts of the Power California Cultural Strategy Ambassadors Program expanded crucial 2018 GOTV efforts. The GOTV campaigns were rooted in narrative and cultural strategies, which enabled them to:

And it worked. California saw a historic increase in young voters of color, with large turnout gains in Orange County and other locales in which the project took place.