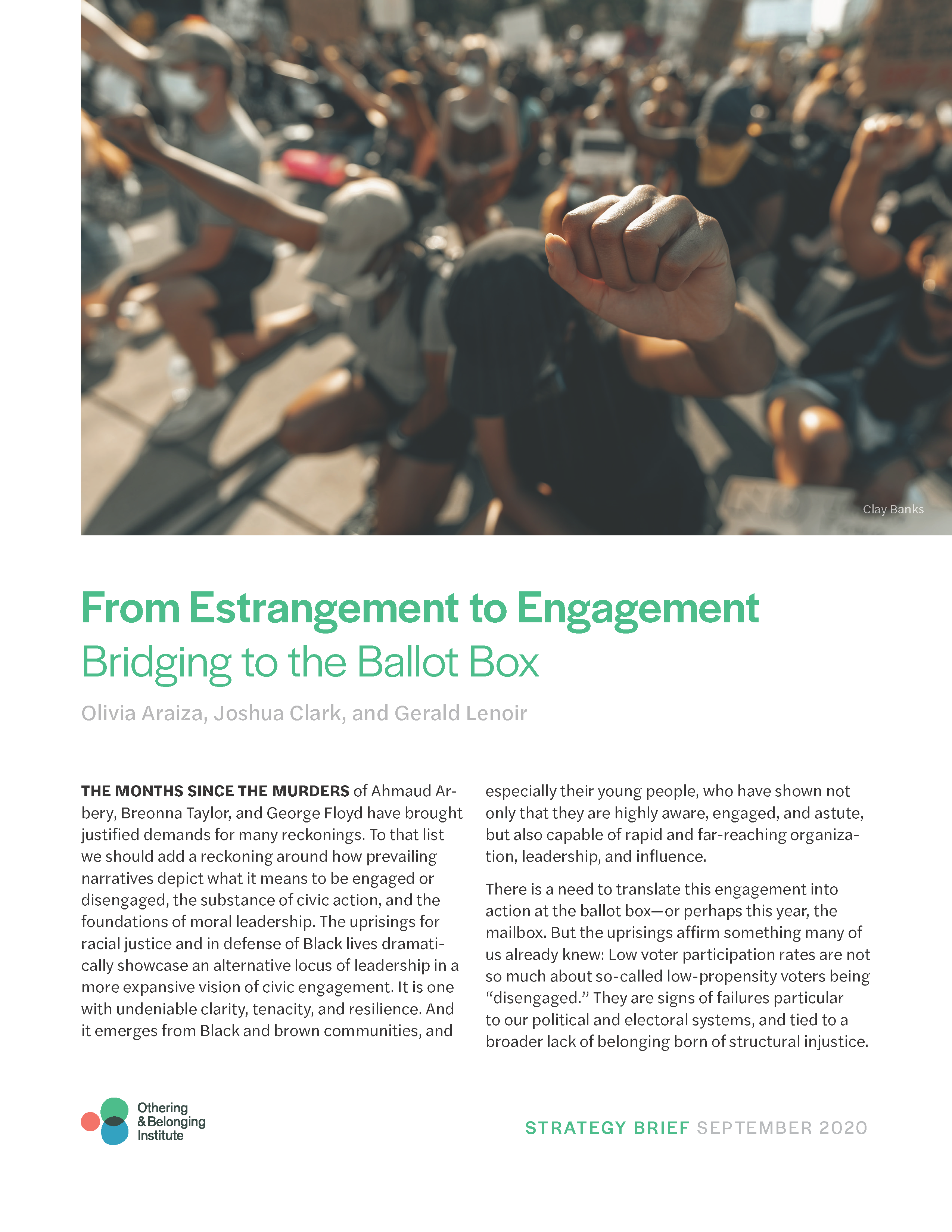 THE MONTHS SINCE THE MURDERS of Ahmaud Arbery, Breonna Taylor, and George Floyd have brought justified demands for many reckonings. To that list we should add a reckoning around how prevailing narratives depict what it means to be engaged or disengaged, the substance of civic action, and the foundations of moral leadership. The uprisings for racial justice and in defense of Black lives dramatically showcase an alternative locus of leadership in a more expansive vision of civic engagement. It is one with undeniable clarity, tenacity, and resilience. And it emerges from Black and brown communities, and especially their young people, who have shown not only that they are highly aware, engaged, and astute, but also capable of rapid and far-reaching organization, leadership, and influence.

There is a need to translate this engagement into action at the ballot box—or perhaps this year, the mailbox. But the uprisings affirm something many of us already knew: Low voter participation rates are not so much about so-called low-propensity voters being “disengaged.” They are signs of failures particular to our political and electoral systems, and tied to a broader lack of belonging born of structural injustice.

This brief summarizes key insights and applications from research on strategy for expanding the electorate and fostering bridging across lines of difference for greater civic belonging. It is based on (1) the authors’ original research, both qualitative and quantitative, through the Othering & Belonging Institute’s Blueprint for Belonging and Civic Engagement Narrative Change projects,1  (2) secondary research by other scholars and applied researchers, and (3) lessons learned from leading voices in Black- and Latinx-led organizing efforts, through the authors’ ongoing collaborations and strategy dialogues with civic engagement and power-building organizations nationwide.

The synthesis of research and experience offered here is geared toward application in the field in 2020. Our focus is on communities that have been suppressed and underrepresented in electoral participation in the United States, especially Black, Latinx, and other people of color, and young people. No community, much less a whole racial or ethnic group, is monolithic; the lessons we offer here are presented to the scale at which our findings are robust and resonant across research efforts.2 These lessons are not comprehensive, but they are empirically well-grounded and timely. The research of the Civic Engagement Narrative Change and Blueprint for Belonging projects in the areas covered here remains ongoing.

It is widely known that in the United States, rates of voter participation are uneven across voter groups situated differently in relation to hierarchies of race/ ethnicity, educational attainment, income, and age. But the point is often not made in that way. Conventional media and popular discourse tends to assume non-participation arises from simple cynicism, or lack of interest, awareness, “initiative,” or regard for the importance of elections. We must prevent these assumptions from bleeding into our work to expand civic participation and belonging. We should instead root ourselves in these key lessons on inconsistent voters’ perceptions:

Four years ago I voted by mail with my son, and later a card came to each of us at our home, telling us that our vote had not been counted because we hadn’t signed. And my son and I, both of us are very certain that we signed the vote, because for us, it was very important and we took it as a very serious thing. And our two votes were thrown out… So, after that experience… I don’t know. I still don’t even know what I’m going to do.

“Like right now, I could send a vote, [and] I don't know how it's getting counted. I don't know exactly how it's making its way. And then how a decision is actually based on those votes… [Y]ou know stuff that's done on computers. All that could be easily manipulated. And a lot of people are gullible to believe whatever they're just told.”

“I don't know if I'm necessarily excited about it, but I do feel like I want to choose a candidate who's going to be an advocate for me or my community, as well as their cabinet. And even just at a local level—people who look like me, who are there to advocate for me, and enforce new policy that protects me, and things like that.”

[Now] seeing, regrettably, this pandemic that we’re living, how the people in power are making decisions that affect everyday life. Not just our own, [but also] of the people that are around us, the communities. Because in these times, now more than ever we need [things] from the leaders of our country… And at the end of the day, one has to keep up with who one puts in power, so that they make the best decisions.

“My first experience voting was for Barack Obama. And I voted because I thought he could make a change, as well as him being one of us. But when he got in office... [pause] They say the president run the country, but he don't. He's a puppet too.”

Reach of Narratives of Division/Othering

Politics in the United States is replete with language and practices of division, exclusion, and othering. As a strategy for diminishing and distorting the electorate, this is not new, though the tactics of politics of division are always evolving. One of the under-studied facets of politics of division—which most concertedly target whites and aim to stoke white resentment—is their prevalence, character, and hold within and between communities of color. Our research has centered these issues, and here we note some of the outstanding findings from our work.

Some say that addressing some of these big issues really takes people reaching out beyond their own community and working together across lines of difference. Have you heard stories of that kind of thing before?

Not on a larger scale. Outside of co-workers and outside of friends, I haven't seen it from neighbors or anyone else that live nearby.

Firsthand, no. Not secondhand either, I’ve never heard [of that], no.

I've only seen it in small pockets, and it's usually related to business, or some type of job or industry… But unfortunately, what happens most of the time is, as soon as a person's needs are met, they're not encouraged or taught to look beyond.

Can You See It? We know it better than anyone: Americans of all backgrounds are doing extraordinary things with whatever they have. But can you imagine what our neighborhoods could look like with all the resources to thrive? That’s the question posed in “Can You See It?,” a 90 second GOTV short (also in a 30 second version or in Spanish) produced in partnership with California Calls. The short features a young Latina woman biking through her neighborhood imagining what could be if there were money to fund community resources—which would be possible if corporations paid their fair share.

Are Our Elders Expendable? This is the first episode in a larger series “(ILL)Logic: Rethinking the Covid-19 Story,” which seeks to expose how dominant political narratives around this crisis moment are flawed or false, and are being strategically wielded by political actors to avoid culpability for ongoing suffering. This first 10-minute episode, which can also be viewed in an abridged 2 minute version, explores the narrative that our elders should be expendable for the economy, as exemplified by comments from political leaders suggesting that the economy has more value than the safety of vulnerable people.

We The People This animated short exposes how the unmitigated power of US corporations is bolstered by divide and conquer tactics wielded to distract from the harm they do to society and the environment—and generate enormous profits for the wealthy few. The video sheds light on how narratives of scarcity (“There aren’t enough jobs for everyone,” “We can’t afford to pay a living wage,” etc.) work to shield the public from seeing just how wide these corporate profit margins really are. It is government’s responsibility to ensure that corporations serve us, not exploit us.