Since August 2014,  when Michael Brown was killed in Ferguson, MO, and his body left lying in the street for over four hours, the Haas Institute has been part of the national conversation on Black Lives Matter and civil rights in the USA.  In many pieces featured prominently in the media, Director john powell urges us to go beyond thinking about these just as individual cases involving individual actors. The collective and sustained outcry we are in the midst of represents both a systematic failure in our society that can be revealed "wherever we are willing to look" as well as a transformative opportunity to build a real movement for change.

Our staff and affiliated faculty have voiced a number of perspectives on Ferguson and the challenge of our time to create a fair and inclusive society. Read more staff perspectives on the Haas Institute Blog.

Media interviewing or covering Director john powell's perspective regarding the protests and reactions to the Brown and Garner cases include: 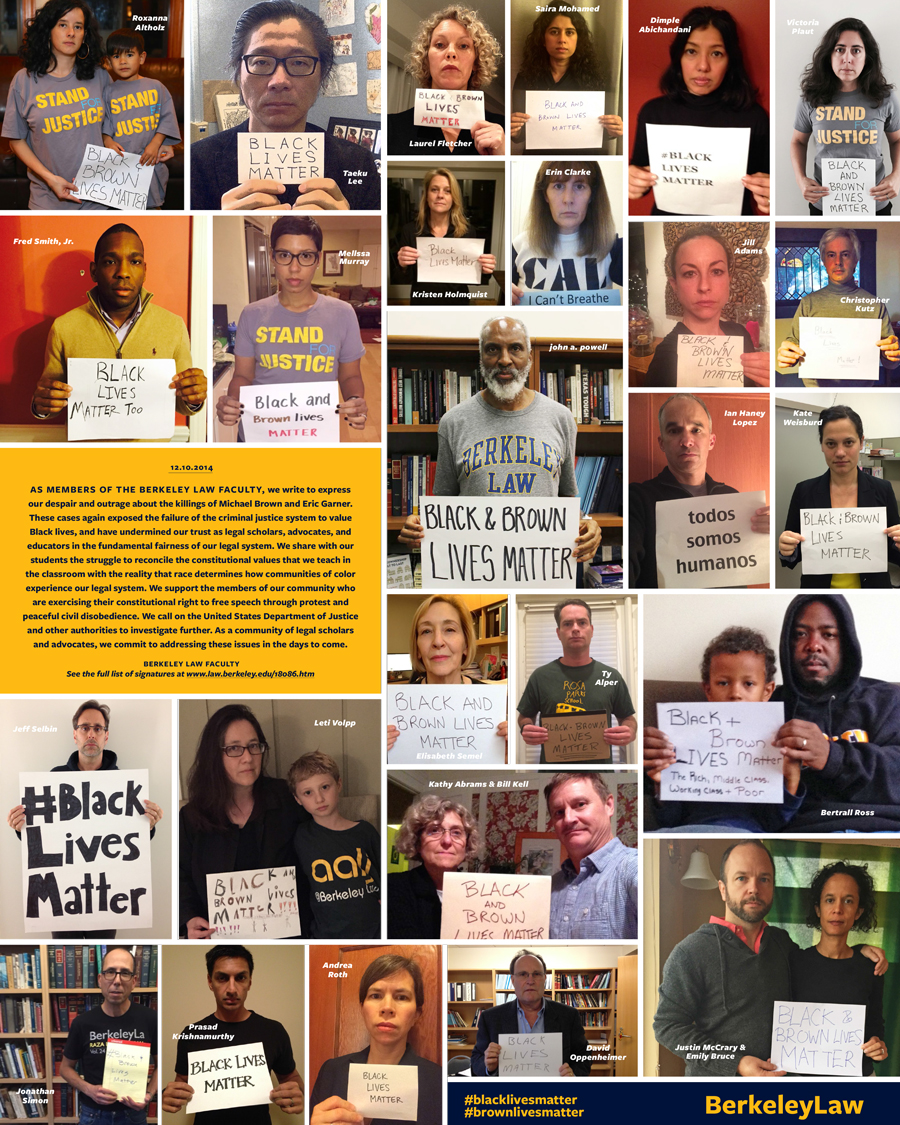 john powell and Haas Institute faculty cluster members Kathryn Abrams, Christopher Edley, Jr., Christopher Kutz, Taeku Lee, Melissa Murray, Victoria Plaut, Bertrall Ross, Jonathan Simon, Sarah Song, and Leti Volpp were among the dozens of Berkeley Law faculty who signed a statement expressing "despair and outrage about the killings of Michael Brown and Eric Garner in Missouri and New York." The statement said the "cases have undermined our trust as legal scholars, advocates, and educators in the fundamental fairness of our legal system." Read the full statement here. Prof. Roxanna Altholz also put out a call for faculty to send in photos declaring their support for #blackandbrownlivesmatter.See the photo collage here.

UC Berkeley Vice Chancellor for Equity & Inclusion Gibor Basri penned an op-ed for The Daily Californian, reflecting on connections between the recent wave of protests in Berkeley and the campus climate for Black students at UC Berkeley. Dr. Basri noted, "I am deeply conscious that the police killings not only of Brown and Garner but of a much longer list of unarmed people of color have brought a new urgency to engage in issues of campus climate and equity." Read the full piece here.