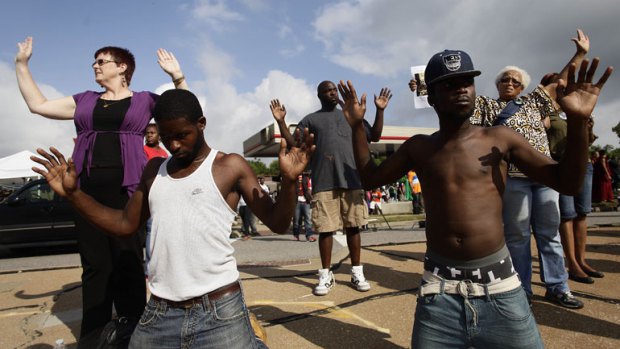 The fervid protests in Ferguson, Missouri following the shooting of an unarmed black man have, once again, revealed a massive rip in America’s storied patchwork quilt of cultures and identities. We should not be surprised — this quilt was never wholly intact to begin with.

On television and online, Americans seem just as divided as ever on issues of race and equality. Indeed, a recent survey from Pew Research Center found that blacks were more than twice as likely as their white counterparts to say the shooting in Ferguson raises important issues about race. Further, while the vast majority of blacks -- 65 percent -- said that the police response to the shooting has gone too far, only 33 percent of whites said the same.

So why the gap?

The answer spans history, culture and psychology -- and offers no easy solutions to one of our nation’s oldest domestic conflicts. America’s tortured relationship with its black citizens—first with slavery and later through flagrantly racist laws and institutions—has been well-documented in history books, political speeches and classroom dialogues. Yet when America’s students recite the appropriately sanitized versions of their nation’s abominable treatment of its black citizens, the profound effects of this history are all too often ignored. Students learn about racism and slavery in the past tense, recalled in nostalgic black and white photographs of people long since dead. Yet the events in present-day Ferguson, Missouri seem not so different than scenes from 1950’s Little Rock or 1990’s Los Angeles.

The past, however, is not disconnected from the present. The unequal legal structures of the Jim Crow era may have been dismantled by the courts, but their skeletons remain. A consequence of this, of course, are the distinct relationships blacks and whites have with the modern-day incarnation of these structures. Evidence of these disparate relationships are perhaps best illustrated in the starkly different attitudes members of each group hold towards agents of these structures, like police, judges, educators and others.

Gallup Poll, for example, recently aggregated data examining white and black Americans’ perception of law enforcement and the criminal justice system. While 59 percent of white Americans indicated they had “quite a lot” of confidence in police, only 37 percent of blacks said the same, with nearly a quarter saying they had little to no confidence in law enforcement. Similarly, Gallup discovered a major chasm between white and black attitudes regarding whether new civil rights laws are needed. More than half of black respondents responded in the affirmative, while less than 20 percent of whites said the same.

We should not be surprised by these results, for, as Haas Institute Director john a. powell recently noted on Democracy Now!, black communities tend to be “overpoliced and underprotected.” The data concurs:

The list goes on, and is already familiar to those of us paying attention.

Yet what often goes unrecognized are the deep roots for these outcomes, which, research shows, are based not just in history but in the deepest parts of our brains. As much as many of us like to believe we “don’t see race” or are “colorblind”, study after study has shown this is simply not the case. Implicit bias, or the unconscious mental attitude towards a person or group, is pervasive and unavoidable. And it is almost always biased against black skin.

This is not history. This is now. And until we stop treating racism and bias as a relic of the black and white era, we will only see more rips in America’s fabric of identity.