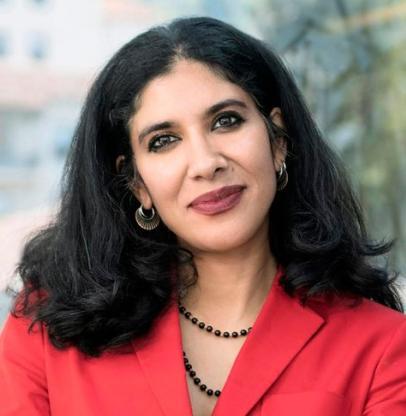 The Haas Institute is thrilled to welcome eminent legal scholar Sonia Katyal as the new Distinguished Chair of its LGBTQ Citizenship research cluster. Katyal, the Chancellor's Professor of Law and co-director of the Berkeley Center for Law & Technology, has been a faculty member at UC Berkeley since 2015. She was previously the John C. McLaughlin Professor of Law and Associate Dean for Research at Fordham Law School.

Katyal is best known for her scholarship at the intersection of technology, intellectual property, and civil rights (including anti-discrimination, privacy, and freedom of speech). One of the most highly cited Intellectual Property law professors in the nation, she is particularly well regarded for her work on branding, trademark law, freedom of expression, and the relationship between copyright enforcement and informational privacy.

Katyal’s recent scholarship, however, has placed gender and sexual orientation at its forefront. In 2017, she published a major article in the University of Chicago Law Review exploring how law defines sex and shapes gender identities. "The Numerus Clausus of Sex" draws a powerful analogy between the numerus clausus principle of property law and the codifications in law that fix sex at birth and presume an unchanging gender identity. Law’s mandate of a fixed and binary conception of sex at birth poses a challenge to our evolving understandings of personhood and the fluidity of gender. In the article, Katyal masterfully argues how law can pivot from the logic of the numerus clausus to that of intellectual property law, which allows for a more fluid conception of sex and gender identity.

More broadly, Katyal’s other current scholarship centers on the intersection between technology, internet access and civil/human rights, with a special focus on the relationships between gender, sexuality, and the commons. Her projects include an article on technology, surveillance and gender, and another on family law’s governance of transgender parents.

Katyal will continue to perform and guide scholarship on issues related to sex and gender in her new role as Chair of the LGBTQ Citizenship cluster. This research cluster focuses on the discriminatory and disparate treatment of lesbian, gay, bisexual, transgender and queer people in our society, paying particular attention to how issues of sexual orientation and gender identity intersect with class, race, nationality, gender, age, and disability.

Outside of her scholarship and teaching, Katyal has been a notably active member of the wider campus community since arriving at UC Berkeley. At the Law School, she served on the Climate Committee (charged with assessing faculty-staff relations in the Law School after a major administrative upheaval) and served on the Law School Dean Search Community. She has also been an active member of the Haas Institute’s LGBTQ Citizenship cluster since before her current appointment. Off campus, Katyal is an affiliate of Stanford Law’s Center for Internet and Society and a founding advisor to the Women in Technology Law organization, and previously served on the Department of Commerce's Digital Economy Board of Advisors, an Obama-era advisory group.

“Professor Katyal has a felicitous mix of scholarly eminence, intellectual vision, institutional-building experience,”  said Haas Institute Director john a. powell of Katyal’s appointment. “Her infectious passion for scholarship befits the next holder of the Haas Chair.”