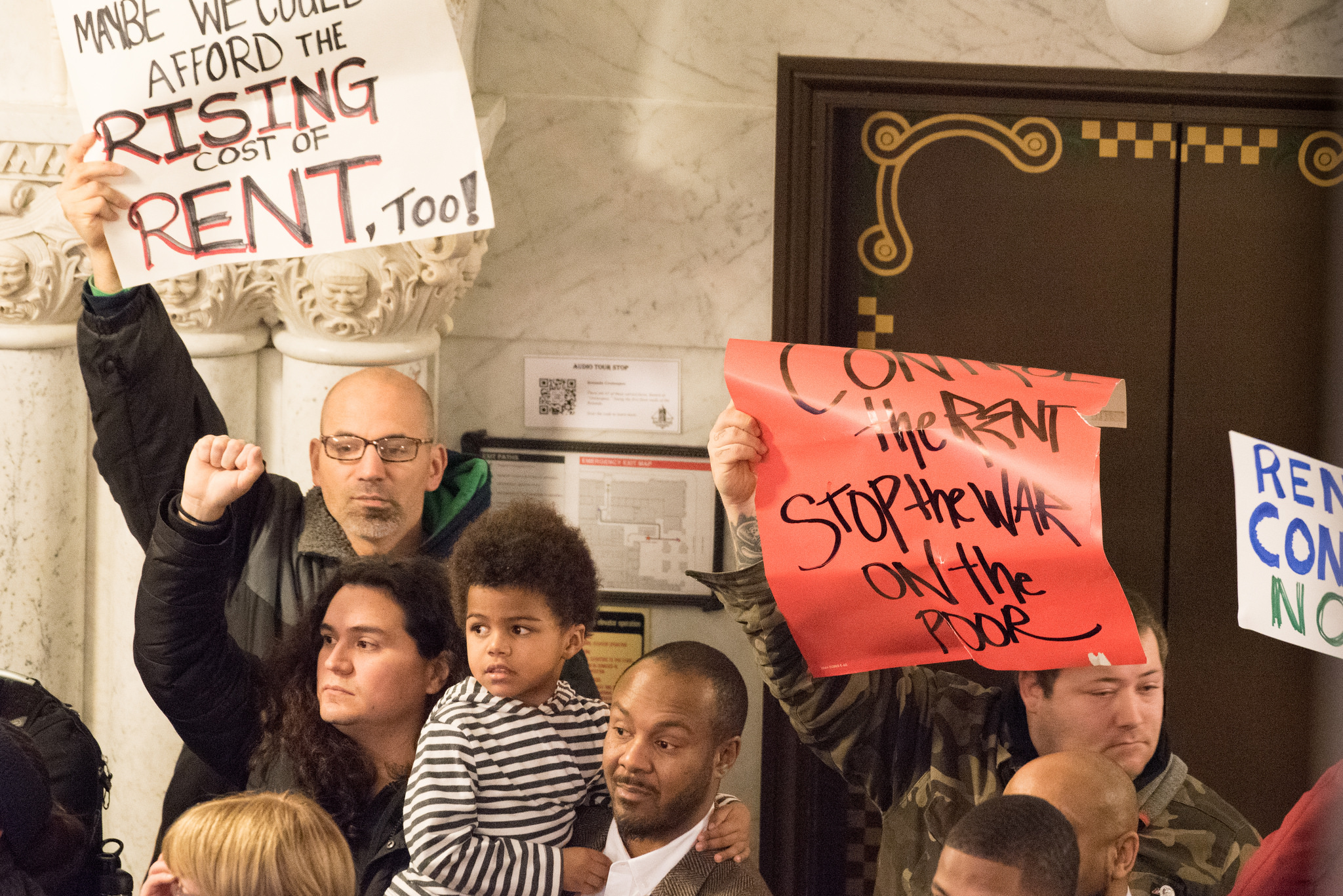 Demonstrators hold signs advocating for affordable housing and rent control at the 2018 City of Minneapolis inauguration on Jan. 8, 2018.

In the current debate around rent control in California, it is worth noting the terms on which this conversation is happening. The results are analyses reflecting the interests of those well-resourced enough to center their arguments as opposed to a thorough assessment of all of the benefits and costs involved, particularly as they are distributed across the most marginalized populations. By definition, a characteristic of being “marginalized” means the disregard and reduction of the concerns and burdens of groups pushed to the fringes of society.

That’s exactly what’s happened in the arena of housing policy.

The economic language ascribed to the rent control debate effortlessly lends itself to this process of interest-burial dressed in the pretense of neutrality. This too easily and too often results in positions that caution against rent control in the name of supporting distressed communities. However, the assumptions underlying these positions demand re-examination to understand the disservice being exacted on the already-underserved.

The first of these arguments is that rent control dampens housing production, which would do more to bring rents down to affordable levels. But there is evidence to dispute that. In a paper in the Journal of Urban Economics, “Out of Control: What Can We Learn from the End of Massachusetts Rent Control?”, Brigham Young University economist David Sims writes that while a survey of economists conducted in the 1990s revealed that 90 percent of those surveyed believed that rent control leads to less housing production, research he cites from housing researchers Edgar Olsen and Nandinee Kutty “predicts that the effect of rent control on housing supply is theoretically ambiguous and must be empirically determined.” In his own analysis of rent decontrol in Greater Boston, Sims finds that “the end of rent control had little effect on the construction of new housing.”

The belief that in the absence of rent control there will be enough new housing to bring rents down to an affordable level misses a number of important factors. Firstly, in many high demand markets, a market failure exists where the average renter cannot afford market rate rents. As the Torontoist reports, citing University of Toronto economist David Hulchanski, there are enough people in the luxury apartment market for developers to solely build upscale units resulting in the market completely neglecting lower-income renters. Additionally, it is highly unlikely that, in hot rental markets, rent control will completely scare off developers. As rent control cannot preclude a fair return on investment under the California constitution, developers still stand to make a profit. Just because developers sound the alarms that they will no longer be able to rake in the exorbitant windfall current market conditions allow for now doesn’t mean that under rent control no one would be willing to build.

Another issue that leads to opposition to rent control is the language used to describe this policy prescription. A paper in the Chicago Journal of Political Economy analyzed rent decontrol in Cambridge, MA and concluded that “decontrol led to changes in the attributes of Cambridge residents and the production of other localized amenities that made Cambridge a more desirable place to live.” Then, after arguing that the “allocative inefficiency” of a “mismatch between renters and apartments” resulting from “nonprice rationing under rent control,” the authors are led to categorize rent decontrol as “the unwinding of allocative distortions.” By this calculus, rent control unsurprisingly fails a cost-benefit analysis. But stripped of this technical terminology, it comes to light that “allocative inefficiency” means poorer people living where wealthier people could live. Factoring in the history of racial housing injustices and racialized predatory lending in the lead-up to the Great Recession, it becomes more apparent how damaging this type of sanitized analysis is.

If we surfaced the interests of low-income residents, people of color, the elderly, and people with disabilities, and understood the preservation of their communities and right to housing as a societal value instead of viewing them as inefficiencies, would we reach the same conclusions and would housing profits be such a powerful determinant?

While there are legitimate criticisms of rent control, this should not signify an abandonment of the idea. The previously discussed analysis by David Sims found that while housing production wasn’t greatly affected, existing units were either withheld or removed from the rental market, and that Black and Latinx renters were underrepresented in rent-controlled units. This is moreso a call for rent control to be one in a suite of policy approaches—like conversion regulation and a targeted universalism strategy—than a rejection of the idea entirely.

Under closer examination, the consensus of the research that rent control does more harm than good doesn’t actually reflect the conclusiveness of a neutral body of analyses. It derives from an emphasis on the interests of the well-resourced and simultaneous overlooking of the weight carried by those already pushed to society’s edge. This framework must be restructured. It is telling that the repealing of rent control ordinances that only existed in the Greater Boston region required a statewide ballot initiative—in which the three cities that had rent control overwhelmingly voted to keep it.

For an analysis that offers a more holistic evaluation of rent control policy, check out the Haas Institute’s new report "Opening the Door for Rent Control: Toward a Comprehensive Approach to Protecting California’s Renters."