Also: check out our curriculum based on this video. They include an introductory 30-minute workshop, a 60-minute trainer module, and a 90-minute deeper dive. The modules are designed for a variety of audiences and center arts-based and popular education practices. View these modules here: 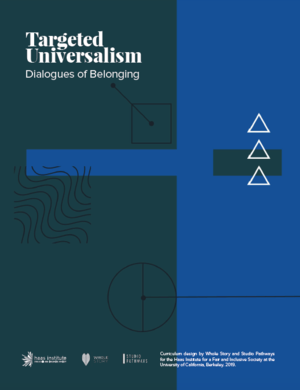 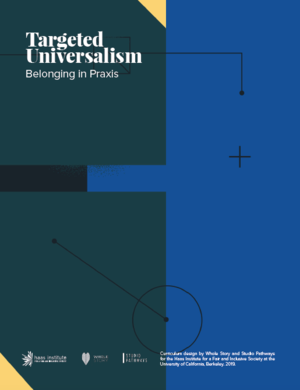 What is the most effective and sustainable policy response to problems in our society?

Universal approaches are widely used in order to package policies for broad appeal.

Universal policies such as Social Security and minimum wage laws provide the same benefits or minimum protections to everyone, regardless of status or group membership.

But by treating everyone the same, Universal approaches can't root out group-based discrimination, and may actually deepen inequality between groups rather than reduce it.

And by providing benefits or protections to everyone, resources that could be targeted to groups worse off instead flow to those who are better off.

In contrast to universalism, targeted approaches are commonly used.

Targeted policies provide benefits or protections based on group membership or status.

Targeted approaches are vulnerable to the critique that they unfairly favor constituent groups over the public good by directing resources to marginalized groups who are already subjected to unfair stereotypes.

But Universal and targeted approaches are false choices.

There is a third way: Targeted Universalism.

Targeted Universalism means setting universal goals that can be achieved through targeted approaches.

This approach targets the various needs of each group while reminding us that we are all part of the same social fabric.

This can be accomplished by following these five steps:

Second measure how the overall population fares relative to the universal goal.
In this example we might discover that only 80% of eighth graders are proficient in eighth grade math.

Third measure the performance of population segments relative to the universal goal.

Fourth understand how structures and other factors support or impede groups’ progress toward the universal goal.

For our Latinx students, classroom instruction materials and lessons designed for English speakers may impede learning including math proficiency.

Finally implement targeted strategies so that each and every group can achieve the universal goal based upon their needs and circumstances.

This may take the form of ESL-specific math tutoring for our Latinx students while another group may require a completely different strategy to achieve the same universal goal.

Targeted Universalism rejects a blanket universal, which may be indifferent to the reality that different groups are situated differently relative to the institutions and resources of society.

By aspiring toward shared universal goals, Targeted Universalism empowers targeted strategies capable of achieving those goals, while moving us beyond concerns over disparities alone, and toward our highest aspirations for all.