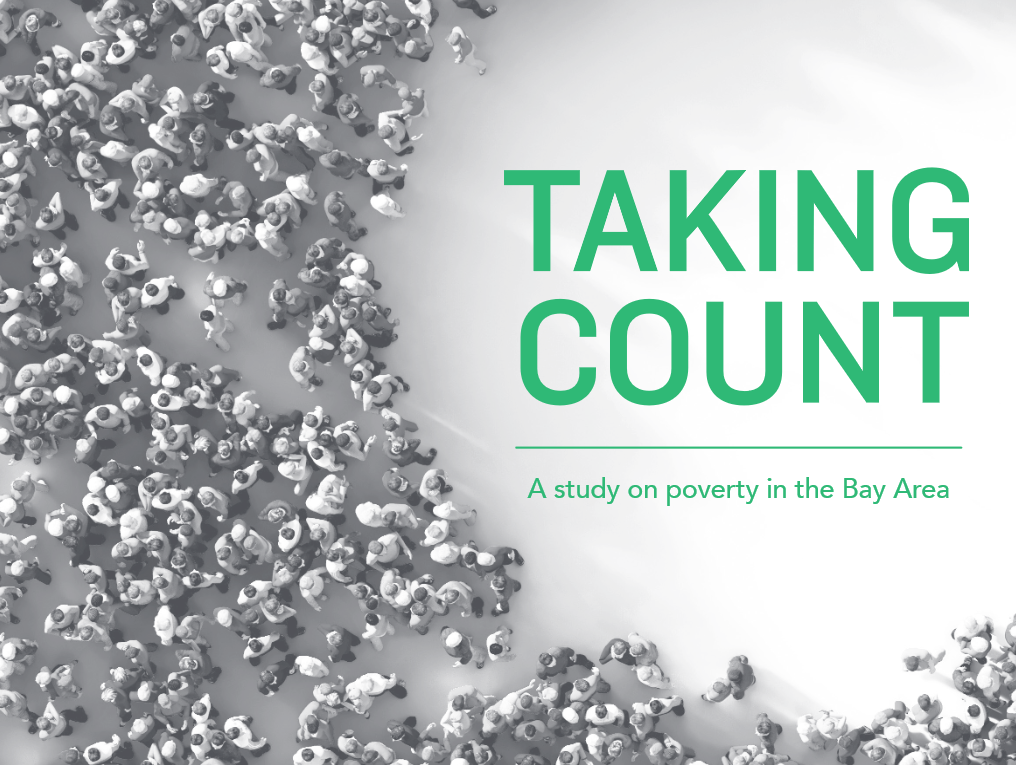 For more information on this project and to download a PDF of this report visit Tipping Point's website. And visit this page for a video recording of an online event announcing this report.

What is Taking Count?

Tipping Point Community partnered with sociologists and political scientists from the University of California, Berkeley, and the Othering & Belonging Institute for a year-long study to get a holistic and nuanced picture of poverty in the Bay Area. As a poverty-fighting organization, we often talk about the people in the Bay Area who are unable to meet their basic needs. But exactly how many people, who is the most impacted, what trade-offs are people making to get by, and what does being unable to meet your basic needs feel like?

To answer these questions, we surveyed a representative sample of Bay Area residents three times over the course of a year. This longitudinal study, called Taking Count, asked a comprehensive set of questions, allowing us to understand what deprivation means for families over time, the ups and downs of a life lived in poverty, and the extent to which all Bay Area residents face hardships throughout a year. Taking Count is about lived experience in context and what it takes to survive in this region.

To get a baseline metric of those living in poverty in the Bay Area, Taking Count calculates the Supplemental Poverty Measure (SPM), which takes into account the local cost of living and government benefits a person receives—neither of which the federal poverty line considers. According to our study, and using the SPM, we see almost twice as many people living in poverty compared to the number of people estimated by the federal poverty line.1

Taking Count presents a timely snapshot of poverty in the Bay Area in the months leading up to the outbreak of COVID-19. The findings illustrate that even when the economy is strong, millions in our community—even those who aren’t considered to be living in poverty—are struggling to make ends meet.

Bay Area Budgets Don't Stretch Through the End of the Month 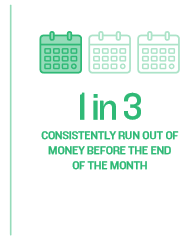 Taking Count found that more than 1 in 3 Bay Area residents frequently ran out of money before the end of the month, and 1 in 2 had at least one experience throughout the year when they were not able to pay all of their bills. With nothing left over from last month’s paycheck, Bay Area families were forced to make impossible choices. Nearly 30% had to go without essentials—food, shelter, medicine—because they could not afford them. The study also found that relying on personal ties for needed support provided a very thin financial cushion for those with less resources and a much more stable one for those already relatively well resourced, shedding light on the important support role frontline organizations play in the community.

Four out of 10 Bay Area families did not have savings to cover three months of expenses, an important benchmark of financial stability. Without this kind of backup, Bay Area residents cannot weather a job loss or medical crisis, which so many more people are facing during this current economic downturn. Nearly 1 in 5 people surveyed had less than $400 in savings for an emergency.

Black and Latinx Residents are Far More Vulnerable to Poverty 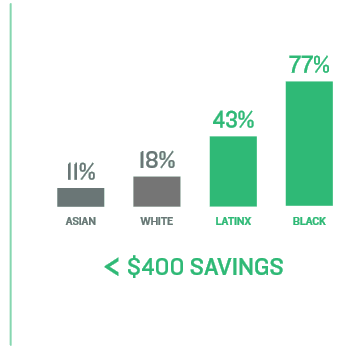 Longstanding histories of racial disadvantage and exclusionary policies make it challenging for even high-income and highly educated Black and Latinx residents to accumulate wealth.

Black residents were also far less likely to have even a small financial cushion to fall back upon. Seventy-seven percent of Black residents reported a time when they did not have $400 in savings compared to just 18% of White residents.

While the prototypical tech worker may enjoy free food, private commuter buses, and stock options, Taking Count found that more than one million workers in the Bay Area lacked the basic benefits that many of us expect from employment. Paid time off is starkly unequal between higher-income and low-income workers. We see similar divides in paid sick leave and access to health insurance and even wider gaps in paid parental leave and the option of remote or flexible work. Because they were often going without health coverage, we found that low-wage workers were far more vulnerable to debt incurred by unpredictable medical events and therefore poverty as well. These are the very benefits that enable higher-wage workers to weather our current pandemic and the lack thereof that exacerbates the vulnerabilities felt most by low-income and Black and Latinx workers. 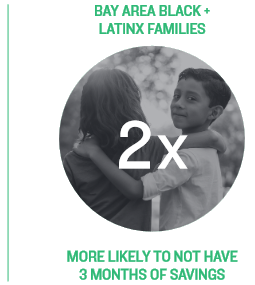 Taking Count forms a striking snapshot of the Bay Area, in the months prior to COVID-19, when unemployment was low and the economy was stable. It shows that even before the pandemic, people across our region were scrambling to piece together enough to get by.

Tipping Point’s mission is to reduce the number of people who are faced with this challenge. This study provides a critical baseline to hold ourselves accountable to, and the findings will help shape our work. It reinforces the importance of frontline service organizations that provide critical essentials when people need them most, like food, medicine, and rental assistance. It also points to the need for direct service to be complemented by policy shifts for broader, systemic change. Integrating the findings of this study with the on-the-ground realities of our grantees and their clients, Tipping Point will use Taking Count to draw attention to the gaps in our social system and create longer-term, more equitable conditions for all residents in the Bay Area in the years ahead.

Methodology: Taking Count is a panel survey of San Francisco Bay Area residents conducted over three waves between 2018 and 2019. It was taken by a sample of 3,100 residents at least 18 years old who live in six Bay Area counties: Alameda, Contra Costa, Marin, San Francisco, San Mateo, and Santa Clara. The study is authored by Irene Bloemraad, Benjamin Bowyer, Taeku Lee, Daniel Schneider, and Kim Voss of the University of California, Berkeley, as well as Jamie Austin and Jacob Leos-Urbel of Tipping Point Community.