Thinking Ahead: Steve Phillips on How We Can Move From Protest to Power 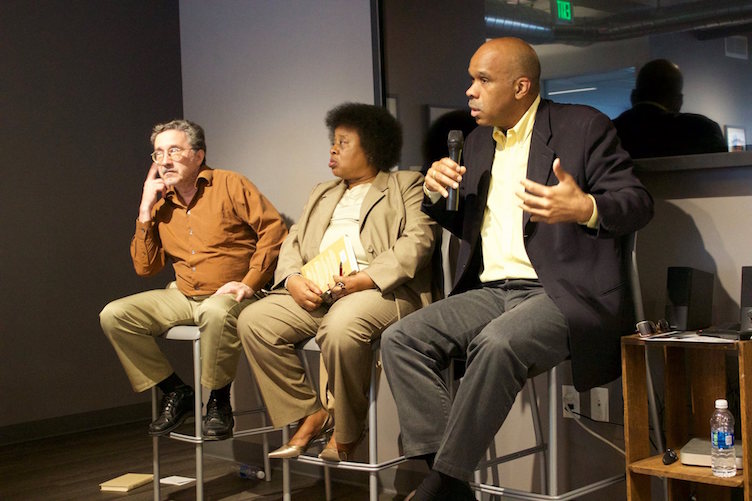 “How can we move from protest to power?” asked author and seasoned political advocate Steve Phillips at the Haas Institute’s first event in its Thinking Ahead discussion series. “We have the numbers, we have the ability—the disconnect is that too much of today’s politics does not speak to the intensity of pain that people feel. It does not speak to their needs and dreams.”

Phillips’ prognosis for the future is optimistic; he believes progressives do not need to wait idly by for demographic changes to unfold to make dramatic changes in people’s lives.

After being introduced by Rev. Damita Davis-Howard of Oakland Community Organizations and Mark Gomez of the Institute’s Leap Forward Project, Phillips opened his talk to the crowd of 40 or so people gathered in downtown Oakland with a personal anecdote. Decades ago, when Steve Phillips’ parents sought to buy a house in a white neighborhood, the owners of the house refused to sell directly to them because, well, they were Black and it was a “white neighborhood.” But his parents persisted, and eventually were able to buy the house through a lawyer. At the time, the neighbors were horrified, and held a neighborhood meeting to discuss what to do about this new “problem.”

“This is an illustration of the roots of the racial wealth gap in this country,” said Phillips,  who was speaking at the Haas Institute’s first event as part of an ongoing lecture series that is aiming to explore ideas related to tackling extreme inequality, ending racial economic exclusion, and create lasting change. As a civil rights lawyer, national political leader, and Senior Fellow at the Center for American, Phillips has been engaged in political and social change for more than 30 years.

“Why are things this way?” Phillips asked. “If you think about it, when has America not had a racial wealth gap?”

He briefly walked the audience through a timeline of racial discrimination in the United States: slavery, Jim Crow, the consistent exclusion of people of color from access to critical legislation like certain New Deal reforms and the federal GI Bill, lack of access to home loans and good schools, and much more.

“The modern-day inequality that hinders children of color from having the same opportunities [as white children] has not been rectified,” he said. “And that’s the context in which we exist."

Phillips then pivoted to the future, offering an optimistic assessment for the progressive movement. There are more progressive whites than thought, he argued, and a coalition of white progressives and people of color creates a majority coalition that can move the country away from the fear-based rhetoric and policy “solutions” we see today, and towards policies that dramatically better the lives of even those who vote against them.

By taking the 95 percent of African Americans, 66 percent of Latinos, and 61 percent of Asian Americans who voted for Obama in 2008, plus the 30-something percent of white voters that are consistently progressive, a winning coalition can be built.

The truth is, Phillips argued, we don’t need to be kept under the “tyranny of the white swing voter.”

No Democrat has won the white vote since Lyndon B. Johnson, he observed—and they don’t need to. “We need to move the movement towards lifting up organizations and leaders of color that will actually succeed in long haul,” including those that can more effectively mobilize and engage voters of color, he said. He added that “we don’t just want brown faces in high places—we want power.”

Following his speech, Phillips took questions from the audience, including those on white privilege, challenges of the progressive movement in dealing with widespread gun culture, and the continued importance of protest.

In answer to the last question, Phillips noted that “we have to be strategic and creative.”

“We have to connect our organizing and policy work,” he concluded.