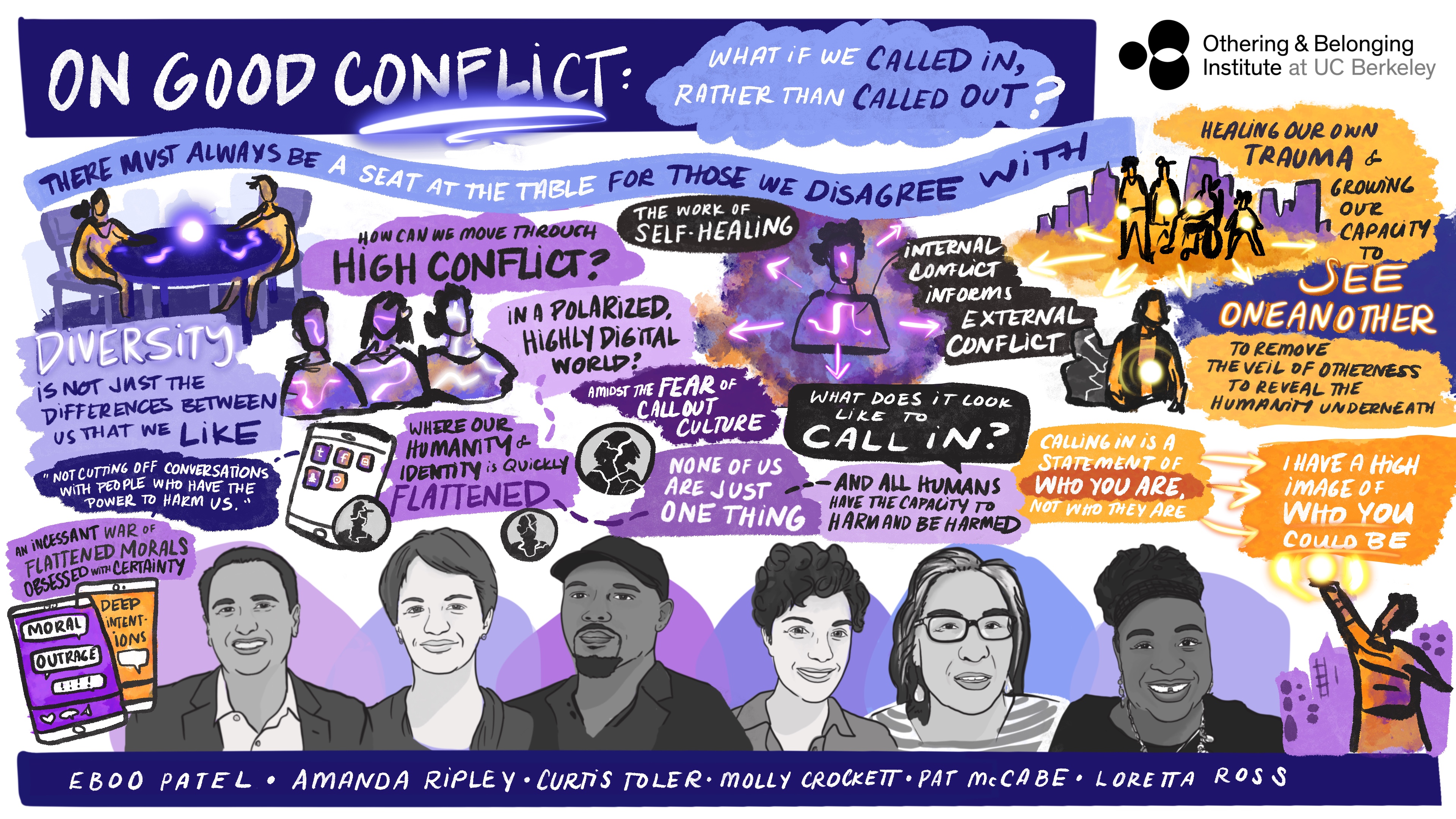 "When I took my shahada," said Curtis Toler, "my past sins were erased and I could start a new life."

Curtis had spent many years as a high-ranking gang leader in Chicago, and he had hurt many people. But he had reached what author Amanda Ripley calls a "saturation point" with the conflicts of the gang life, and he wanted a change. Becoming a Muslim helped Curtis break out of the binary of his tension with a rival gang, live into a different personal identity and change the understory of life. According to Ripley, these are all essential parts of the process for transforming high conflict into healthy conflict.

It was one of many references to religion that emerged in the 2021 Othering & Belonging Conference. I am proud to serve as a Senior Fellow of the Othering and Belonging Institute this year, and a big part of my role is considering the place of religion in bridging work. It should be no surprise that I think it is essential. After all, I founded an organization called Interfaith Youth Core!

What struck me is the number of other people at the conference who seemed to agree. In her comments, the Native American leader Pat McCabe spoke about the understory of all human life was belonging to Mother Earth. If we could shift our collective narrative to a spiritual framework that centered the environment, we humans would view our own diversity differently – as something that was part of the ecosystem of a diverse creation, seeking harmony and cooperation. Pat made clear this view came out of her own Native spiritual traditions, but she also quoted an analogous teaching of a Buddhist leader, the Venerable Thich Nhat Hanh, who spoke of the integration of all life with the term "interbeing."

Loretta Ross, a peace and justice activist who teaches at Smith College, made a powerful reference to religion also. For many years, her job has been to monitor hate groups. She started in that role both because she knew hate groups were dangerous, but also because she was curious. How could people hate people who they never met? Ross’s mentor was the Reverend C.T. Vivian, a close aide to Reverend Martin Luther King Jr during the civil rights movement. Vivian told Ross that her job was not just to learn about hate groups or eliminate them, but to encourage people within them to give up hate. And if you are going to do that, then you have to commit to being there for those people when they do what you ask. It was a spiritual practice, one that Ross came to embrace.

Those of us who are building the bridging field speak often of identity, typically race, gender, sexuality and politics. After all, bridging is often necessary because of the differences, tensions and conflicts between the various groups defined by the above identities.

It is time to include religion at the same level. One reason of course is that religion is an identity around which groups form and there is too often unhealthy tension between those groups. But another reason, as revealed by the comments made during the Othering & Belonging Conference, is that religion provides a vast toolkit for bridging work. It provides a worldview in which diversity is sacred, in which humans are cosmically connected, in which mistakes might be forgiven, in which redemption is possible and new and more cooperative lives might be lived.

Eboo Patel is the founder and president of IFYC, and a Senior Fellow at the Othering and Belonging Institute.