The poll further shows that support for mask requirements spans inland voter groups, including across lines of race/ethnicity, educational attainment, and household income levels. Mask requirements are the most popular of the three public-health interventions polled, although the other two—limiting restaurants to carry out and delivery only, and religious services to outdoor spaces only—also received majority support from Inland Empire voters.

These results stand in sharp contrast to the actions of some local activists and elected officials, who have made a public show of opposing state COVID-19 mitigation efforts, even throughout winter months in which the two-county Inland Empire was an epicenter of the virus’s spread.

“This poll only validates what we have seen in the community. There is a silent majority being overshadowed by a loud few,” said Michael Gomez Daly, Director of IE United, an Ontario-based civic organization. “Now that we have evidence of this, we hope our county elected officials change their rhetoric, and focus on doing what is right for the community: listening to science and approaching recovery and reopening in a responsible manner.”

The poll was conducted online in English and Spanish by the Institute of Governmental Studies (IGS) and the Othering & Belonging Institute (OBI), both at the University of California, Berkeley. Statewide, the IGS Poll was completed by a stratified random sample of 10,358 registered California voters during the week of January 23-29, 2021. The poll included an oversample of 1,286 voters from Riverside and San Bernardino counties—known together as “the Inland Empire”—as part of a multi-year research partnership between OBI and IE United.

Respondents were asked, “Do you support or oppose the temporary adoption of each of the following policies in your county to slow the spread of the coronavirus?,” followed by three measures from the state’s Regional Stay Home Order (which was lifted while the poll was in the field).

For the policy of, “Requiring individuals to wear a face covering or mask when entering or waiting to enter public spaces or retail stores,” 72 percent of Inland Empire voters expressed “strong support,” and another 10 percent said they “somewhat support” it.

Even larger shares of inland voters expect their “local public officials [to] set an example by wearing a face covering or mask in public.” Eighty-six percent of voters say it is very important or somewhat important that local officials wear masks, including 90 percent of voters of color and 82 percent of white voters. 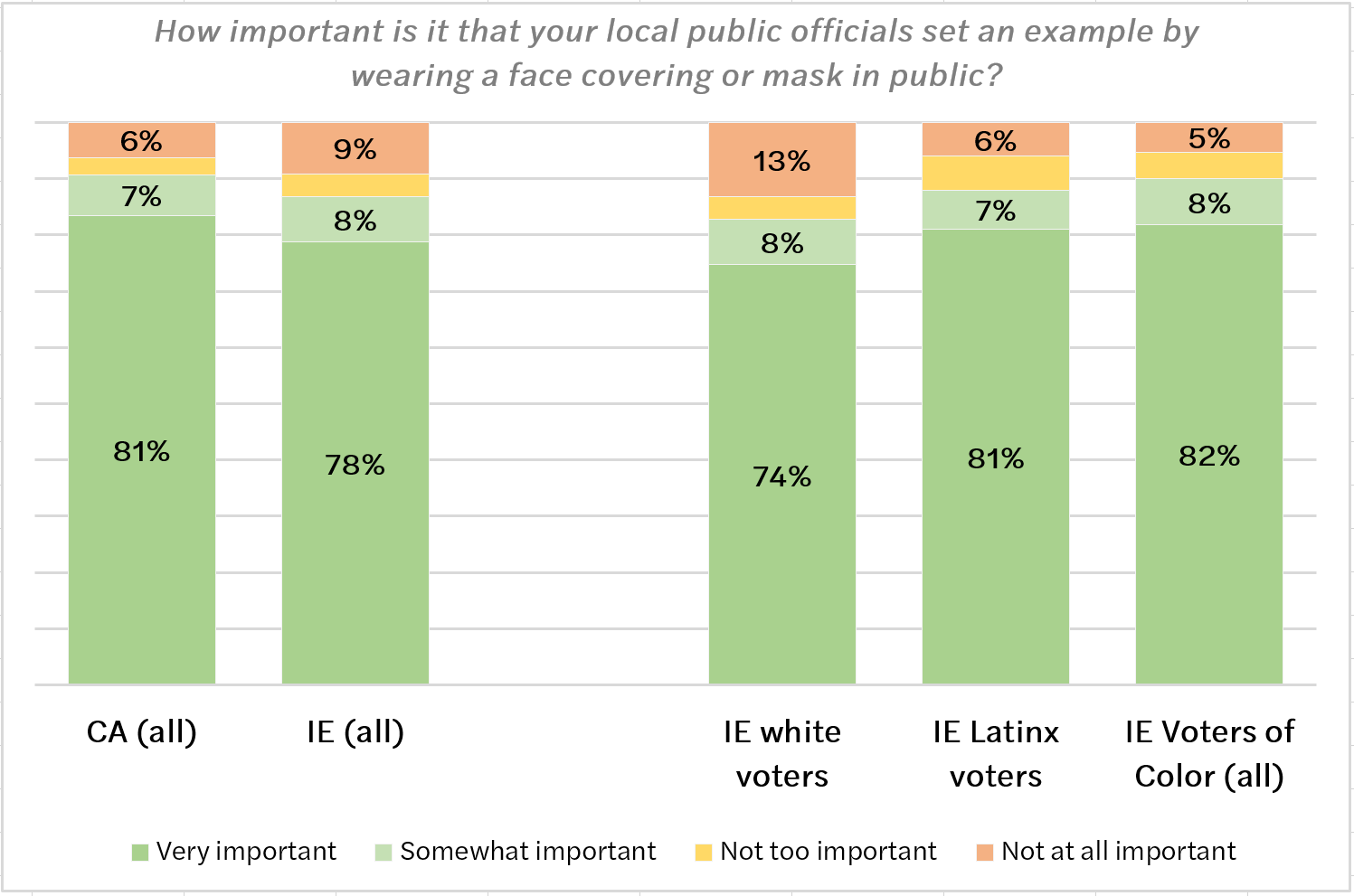 “There aren’t too many things that 86 percent of voters agree their public officials should be doing,” said OBI’s Joshua Clark, who has overseen public-opinion and narrative research in the Inland Empire for the Institute’s Blueprint for Belonging project for more than two years. “That is about as close to a consensus as you are likely to see in the Inland Empire.”

The poll takes stock of how Inland Empire voters are thinking about COVID-19 mitigation after months of sporadic protests, and consistent contention between local and state governments over virus-related restrictions. Both San Bernardino and Riverside counties had rescinded their initial face-covering mandates by early-May 2020, and local officials have publicly challenged rules established by the state. In Riverside County, officials refuse to give tickets or otherwise enforce mask requirements, or to apply fines to businesses that flout COVID-19 orders. San Bernardino County’s Board of Supervisors moved to initiate a lawsuit in late November to challenge the state’s reopening plan, and then filed a suit directly with the California Supreme Court when the recent Regional Stay Home Order was announced in early December.

One of the provisions that the December lawsuit challenged was that which temporarily limited restaurants to offering take-out and delivery orders only. According to the IGS Poll, that restriction enjoys the support of a 64-percent majority of Inland Empire voters. Similarly, 63 percent support limiting in-person religious services in their county to outdoor spaces only. 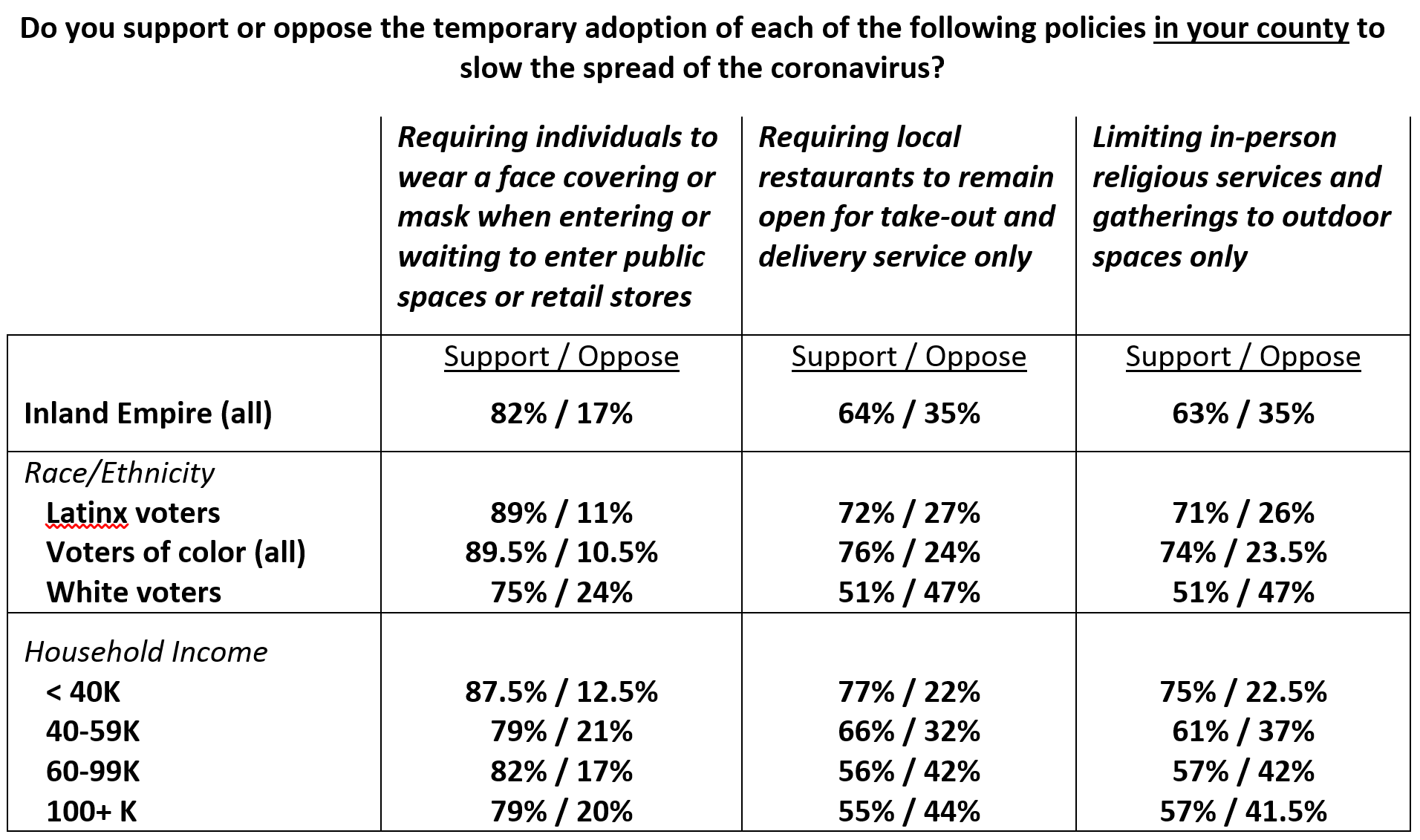 The latest spike in COVID-19 infections, beginning in late-November 2020, hit the Inland Empire particularly hard. When the state announced the Regional Stay Home Order, confirmed cases in both counties were already around 90,000 each. Since then, these numbers have more than tripled. Of the 40 most populous counties in the United States, San Bernardino and Riverside today rank second and fourth for the highest number of COVID-19 cases per capita.

“Whether you’re in San Bernardino or Rancho, MoVal or Murrieta, we all know that it is our lower-income communities, and our Black and brown communities in particular, that are made most vulnerable when people don’t follow the rules,” said Pastor Sam Casey, Director of Congregations Organized for Prophetic Engagement (COPE). “Public-health officials have told us what we can do to stop that dynamic, and we just need to do our part by listening to them. It’s really that simple.”

For details on methodology and tabulations reporting the results for each question of the poll, visit the Berkeley IGS Poll website at https://www.igs.berkeley.edu/research/berkeley-igs-poll.