On Jan. 24, more than 35 thought leaders from across Europe and the US gathered at Sciences Po in Paris for the Othering & Belonging Institute’s first European convening. Organized in partnership with More in Common, Queen Mary University of London, and Sciences Po Law School, “Moving Forward Toward Belonging: A Symposium on Othering & Belonging” sought to help shape emergent work in Europe by identifying a cross-sector of actors already working towards belonging in the region. The symposium agenda was also crafted to discuss how the concepts underpinning the O&B framework can be translated in Europe. Questions and ideas from this symposium will be expanded further in a public conference to be held June 15-17 in London.

The daylong workshop sought to understand the shared challenges of heightened othering and “breaking” in both North America and Europe as well as the ways these phenomena manifest differently in each context. Those who took part in the discussion included scholars from UC Berkeley, the Max Planck Society in Germany, the University of Amsterdam in the Netherlands, Sciences Po in France, as well as practitioners and policymakers from cities as diverse as Brussels, Turin, Birmingham, Athens, Manchester, and Barcelona. Participants also came from a highly diverse set of groups, including youth education leaders, culturemakers, those working with institutions such as the EU, government officials, philanthropic organizations, racial justice movements and more.

Othering & Belonging Institute Director john a. powell opened the symposium with remarks on how to respond to authoritarianism with radical belonging, explaining how bridging and breaking manifests in the US, and inviting participants to discuss what othering might look like in various European contexts. The term “other” is an “empty signifier,” powell explained, and it’s important to not get stuck in a single conception of who can be an “other” in any situation or context. “We are trying to challenge the entire process of domination,” powell said. “People may come in through their own lens, but we don’t want to leave them there.”

In thinking through how challenges to belonging may look in Europe as compared to the US, UC Berkeley scholar Karen Barkey highlighted the centrality of secular identity for many Europeans. The US, Barkey said, is much more religious than Europe and belonging is often found within religious communities and churches. However, in many parts of Europe, “the churchgoing population is very small...and the introduction of religious migration into Europe has really changed the possibilities for pluralism,” she said. “In the US, pluralism between religions is more possible and much more fluid than in the European context.” Barkey, who is also a faculty scholar affiliated with the Othering & Belonging Institute, was one of a handful of US-based thought leaders who attended the conference to help bridge the O&B framework between its US roots and its capacity for transnational resonance. 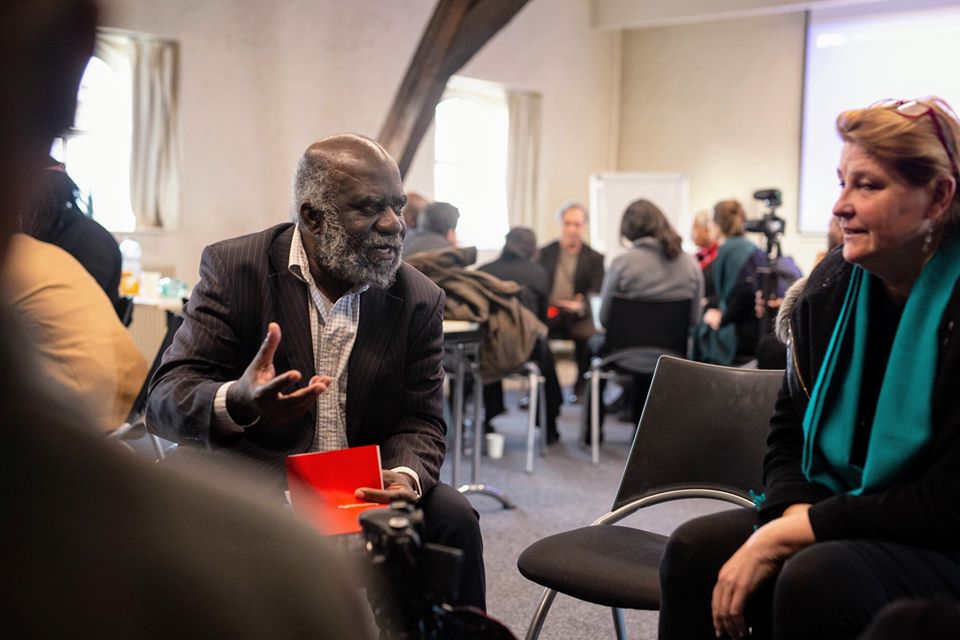 Fieschi, who facilitated the day’s event along with powell, discussed populism and division in Europe, challenging participants to consider how we can move away from the unhelpful binary forced upon populations by the rise of populist movements. “What is populism?” Fieschi asked. “It’s a weirdly democratic form, unkind to any minority view—its democracy at its most oppressive.” Populism works on a binary, she continued, clearly delineating an authentic “People” from an inauthentic and untrustworthy “elite.”

“The most important part of populism is its relationality—what it offers as a set of relationships. It’s the kind of ‘us’ that offers an ersatz form of belonging,” she concluded. “Populism bypasses emotional work, it goes straight to an instinctiveness that doesn’t require engagement with difficulty of complexity, emotion. This obviousness is partly where the power of populism comes from.”

Indeed, populism, polarization, and political extremism in general were highlighted often as key challenges to bridging and belonging in many different contexts in both the US and Europe. Still, noted Italian policymaker Claudio Tocchi of the city of Turin, the issue in his context is not so much polarized extremists, but rather populism in general. “Most of the policymakers in this very moment are not populists, they are not extremists,” he said, and yet growing populism at large is propelling polarization and mistrust. “I need better applications and best practices for how we can deal with populism, not populists.”

In response, participants raised a number of points about whether populism and polarization is measurably as bad as it appears, how practitioners may inadvertently be contributing to othering and polarization in their work, and how axes of difference can manifest along differences beyond race, such as gender, ideology, or religion.

A final set of conversations centered on whether the othering & belonging framework should first be applied at broader structural levels, such as with national governments or the European Union, or at the local level, in recognition of the limitations and drawbacks of navigating governmental bureaucracy. While the symposium concluded with that question to be further examined, powell reminded participants that the journey to belonging is long—but is today more urgent than ever. 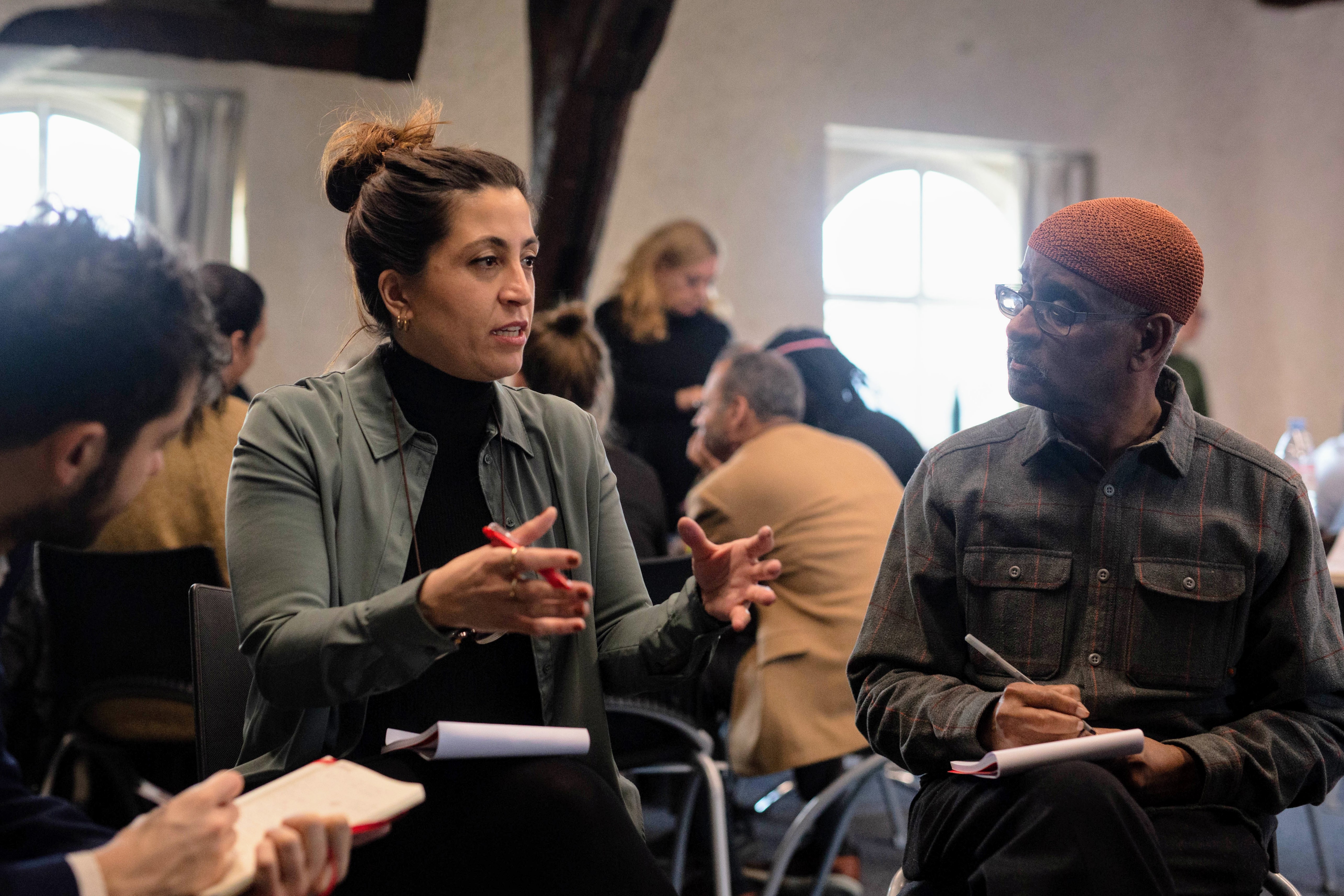 Sonia Aldoz speaks in small group discussions, with Gerald Lenoir from the the Othering & Belonging Institute. 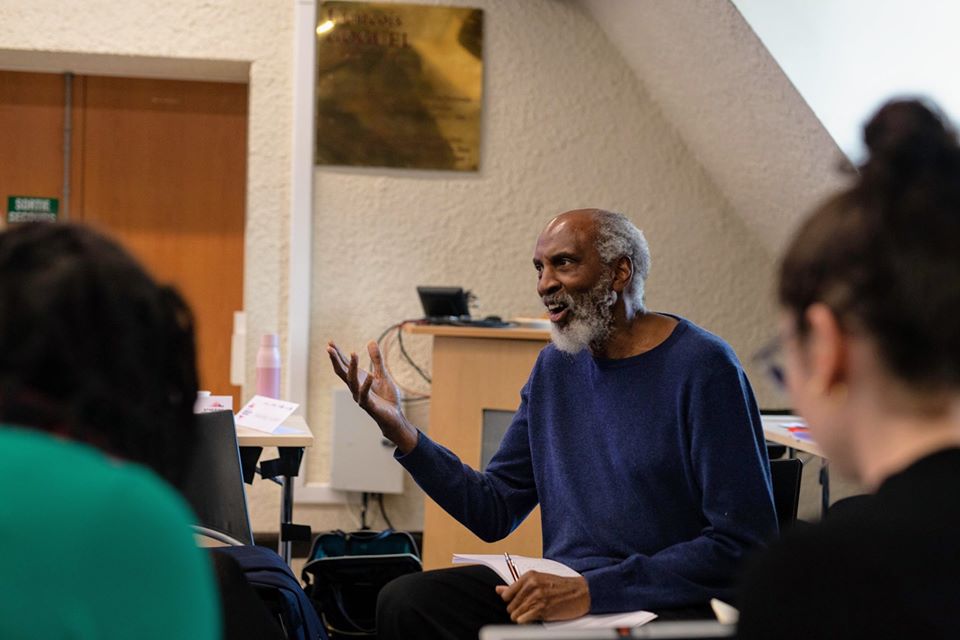