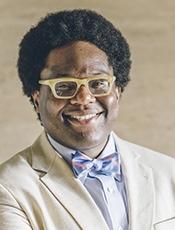 Osagie K. Obasogie is the new endowed chair of the Haas Institute's Diversity and Health Disparities research cluster. Obasogie, Professor of Bioethics in the Joint Medical Program and School of Public Health, spoke with us about his research on racial disparities in health, the myth of "colorblindness," and how blind people "see" race.

Let’s start with a little bit about you. Did you always see yourself entering academia? How did you become interested in the ways in which racial thinking is central to law, medicine, science, and other areas?

In a way, yes. Both of my parents are retired educators. My mother taught high school, and my father was a college professor. And I have other family members who taught at various levels. So, education is, in some sense, a big part of my family.

I became interested in race and science when I was a graduate student here at Berkeley. I was interested in race in general, but the health sciences weren't on my radar. That changed in 2005 when I read an article about the FDA approving a drug called BiDil, which became the first drug to receive a race specific indication—in this case, for Blacks suffering from heart failure.  Put differently, the side of the bottle essentially says that the drug is for Black people only. At the time, this boggled my mind. How can there be race specific medicine when we all know race is a social construction? I dug a little deeper into the debates and realized that the idea of race reflecting "nature" or inherent biological differences did not go away after World War II as the standard narrative regarding the arc of racial thought in America would tell us. Instead, there is a long line of distinguished researchers who continue to promote the idea, and it is having a damaging effect on how we understand human difference and health disparities. So, that's when I decided that I wanted my scholarship to be a part of this conversation.

One major misconception is that many people think that most health disparities are a function of inherent differences between groups and don't consider their social determinants. Racial minorities aren't likely to be sicker or have worse health outcomes because of natural differences. Rather, these poorer health outcomes are linked to the ways these groups are treated across the board -- from employment to education to the criminal justice system. Once we understand health disparities to be a product of the way that we design social and political systems, we can then find effective structural solutions to closing the gaps.

I interviewed over 100 people who have been totally blind since birth and asked them about their understanding of race and their racial experiences. We tend to think that race is primarily a visual experience or something that is obvious or self-evident. But what I found was a bit surprising—at least from the standpoint of how we traditionally think about race. Blind people understand race like anyone else—visually. So, when you ask a blind person about race, they tend to point to the very same visual cues that sighted people do, such as skin color and facial features. What's even more interesting is that these visual cues have an emotive and social impact within the blind community just as they do with sighted people. The stories that these interviews revealed about how race shapes things such as where blind people live or who they date highlight how race isn't simply obvious or self-evident. Instead, social forces—friends, family, institutions, etc.—socialize us to see race in particulate ways. And these social forces are so strong that even blind people, in a sense, see race.

Do you believe that are there any larger implications or takeaways for society based on the findings published in that book?

Absolutely. Colorblindness, as an idea that talking about race is racist and that not talking about it leads to equality, has come to dominate legal and political discourses over the past several decades. It suggests that the State should not take race into account when making decisions—even for the remedial purpose of making up for past harms done to racial minorities. Underlying this colorblind metaphor is a certain assumption about how race plays out in the blind community. That assumption is that since blind people cannot see, they must not have any understanding of race and therefore live in a racial utopia where everyone is treated equally. My research shows that this is demonstrably false; race shapes the lives of blind people as much as it does for people who are sighted. My hope is that this book can provide a moment of reflection for rethinking colorblindness so that we can move forward in our pursuit of racial justice with more appropriate framings and understandings of how race shapes people's lives.

You’ve also written about the ethics around new reproductive and genetic technologies. What are some of the major challenges in this area you are seeing today? What are the major controversies or points of contention?

Much of my work in this area looks at how new reproductive and genetic technologies—stem cell research, assisted reproduction, race based medicines, designer babies, etc.—impact society and, in particular, vulnerable communities (e.g. racial and sexual minorities, women, people with disabilities, poor people, etc.) These powerful technologies have the potential to do much good in the world. However, without oversight, they can also adversely impact those who are marginalized. For example, race based medicines might prematurely focus heath disparities conversations on molecular differences between racial groups as opposed to known social determinants. And, screening embryos for certain traits or diseases can have stigmatic and political impacts on people living today with those disabilities. So, my work attempts to develop oversight mechanisms that can help society balance the contributions and challenges that arise from these technologies so that diverse communities can benefit from them.

You’re currently working on a second book, Beyond Bioethics: Toward a New Biopolitics. Could you speak a bit about what it’s about and how it relates to some of your previous work and interests?

Beyond Bioethics is a volume that I am co-editing with Marcy Darnovsky. Over the past several years, many scholars have noticed the limitations of mainstream bioethics. As a field, bioethics emerged after World War II to acknowledge and respond to the central role that scientists and physicians played in facilitating the horrific treatment of people leading up to and during the Holocaust. Bioethics evolved in the postwar period to establish rules, principles, and guidelines on how physicians and researchers should interact with patients and human subjects, with respect and justice being key values.

While laudable and important, the rules that have come to characterize bioethics as well as the professionalization of the field itself have led it to not be as responsive as it could be to the distinctly political challenges that underlie new reproductive and genetic technologies. For example, when we think about future societies with widespread embryo screening practices for traits such as disease status, height, or perhaps even "intelligence," the issue is not simply respecting the autonomy of individual patients but rather understanding the eugenic impulse behind such practices that may lead us back down the very same path that bioethics is supposed to prevent. Beyond Bioethics will be the first edited volume that collects a series of previously published articles that articulate this concern. Taken together, this critique suggests that we need an alternative approach that is sensitive to the political dynamics entwined with these new technologies as well as their implications for social justice and human rights—an approach that Darnovsky and I call "a new biopolitics."

What made you interested in in the Haas Diversity and Health Disparities Cluster? What do you envision as the full potential of the cluster for turning research into impact? Any specific goals you hope to tackle?

Much of my past work has been on critical theory and the law. This approach tries to understand how notions such as race, gender, sex, sexuality, disability, and class are not ancillary variables that exist outside of the law and only occasionally bump into an otherwise neutral and objective system of governance. Instead, they are deeply embedded with law and are central to how law organizes itself. This perspective has gained much traction in law over the past several decades, and my work as Haas Chair of the Health Disparities Cluster is to continue this critique in the fields of science and medicine—particularly in how we understand the way that embedded ideologies of race (and other standpoints) shape how we understand human differences and group disparities. I am so happy to be working with such an amazing group of scholars within the Health Disparities Cluster and across the Haas Institute. My hope is that our work can tease out the subtle ways in which ideologies of difference shape (and mis-shape) traditional ways of understanding human health so that we can develop better, more wholistic research methods that are informed by rich theoretical perspectives on human relations.