As secretary of state-pick Mike Pompeo, known for his anti-Muslim views, nears confirmation, and the Supreme Court appears poised to uphold the Muslim ban, the Haas Institute releases a database that identifies state lawmakers behind a raft of anti-Muslim legislation.

BERKELEY, CA: The Haas Institute for a Fair and Inclusive Society at UC Berkeley on Wednesday released a searchable, public database of anti-Muslim bills designed to institutionalize the exclusion of Muslims from society and the state legislators across the country who supported them.

The release of the United States of Islamophobia Database comes as the Islamophobia movement receives further public momentum with President Donald Trump’s recent picks of figures noted for their anti-Muslim views for high-level posts, and as the Supreme Court today signalled it would rule in favor of Trump’s travel ban mostly targeting Muslim-majority countries, widely known as the “Muslim Ban.”

The United States of Islamophobia Database includes detailed information on 216 bills introduced in 43 state legislatures since 2010 that sought to ban “Sharia law,” or a set of guiding principles, from being considered in US courts.

In many of the states where anti-Sharia bills were introduced, such as Mississippi, which alone introduced 20 bills, Muslims only account for a fraction of a percent of the population—a fact that underlines the absurdity of the claims of the bills’ proponents who argue that anti-Sharia legislation is needed to protect the US Constitution.

Mississippi was second only to Texas in the number of anti-Sharia bills introduced in the state legislature since 2010. Texas introduced 21 bills. 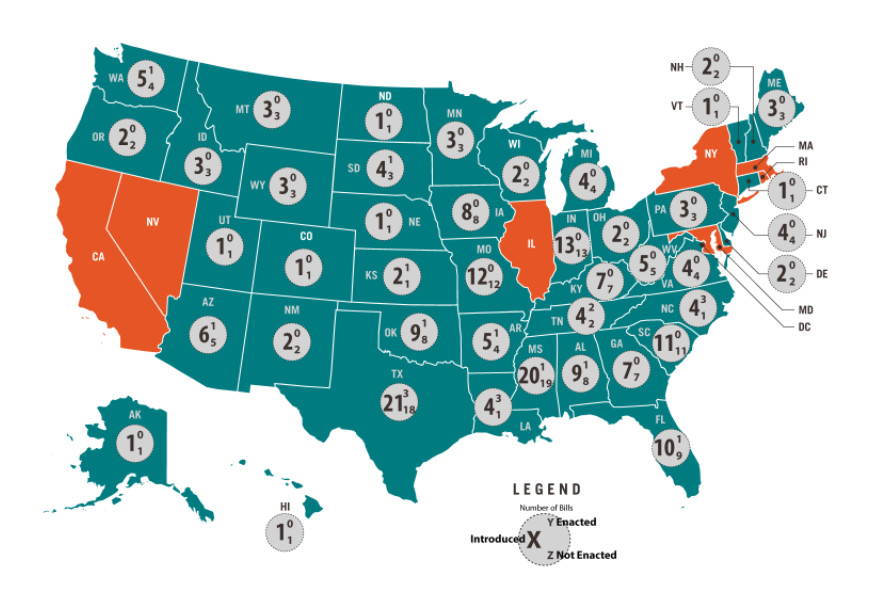 Our analysis shows that the bills were put forth with the intention to exacerbate an already-hostile climate of fear of Muslims and to further institutionalize and legalize their exclusion from society. These findings were documented in the Haas Institute’s “Legalizing Othering: The United States of Islamophobia” report published last September.

"The scrutiny of US state legislation intentionally targeting Muslims—whether introduced, failed, or enacted—is vitally important to understanding a new wave of Islamophobia sweeping the country,” lead researcher and Legalizing Othering co-author Elsadig Elsheikh noted. “Our research finds that this effort is well-financed and highly organized,” added Elsheikh, who heads the Global Justice Program at the Haas Institute.

The release of the database comes two weeks after John Bolton, who formerly served as a chairman of the anti-Muslim Gatestone Institute, began his new job as Trump’s national security adviser.

Meanwhile CIA Director Mike Pompeo is on track to being confirmed as Trump’s secretary of state. As a member of Congress, Pompeo stated in 2016 that a “practicing Muslim, who believes in the teachings of the Koran, cannot be a loyal citizen to the United States of America.” Pompeo was also awarded the “National Security Eagle” prize by ACT for America, described as a hate group by the Southern Poverty Law Center, and which is a chief proponent of the anti-Sharia legislation detailed in our new database.

“If Pompeo is confirmed as secretary of state that will signal a triumph of the Islamophobia movement in occupying one of the highest positions of the US government,” Elsheikh said.

The database is an updated and expanded version of an earlier release of spreadsheets that accompanied last year’s launch of the Legalizing Othering report. The report details how, following the tragedy of 9/11, a number of far-right actors undertook coordinated efforts to alienate, criminalize, and spread fear of Muslims in the United States.

One of the aims of the database is to expose the supporters of anti-Muslim legislation and draw public attention to the wave of Islamophobia seeking to divide communities.

“This dynamic database is a unique tool designed to make information pertaining to anti-Muslim legislation both easy to access and navigate, and to serve as a resource to hold our representatives accountable to best serve the interests of all Americans,” Basima Sisemore, a Haas Institute researcher who worked on the database and co-authored the Legalizing Othering report, said.

You can access and explore the database and the Legalizing Othering report here.