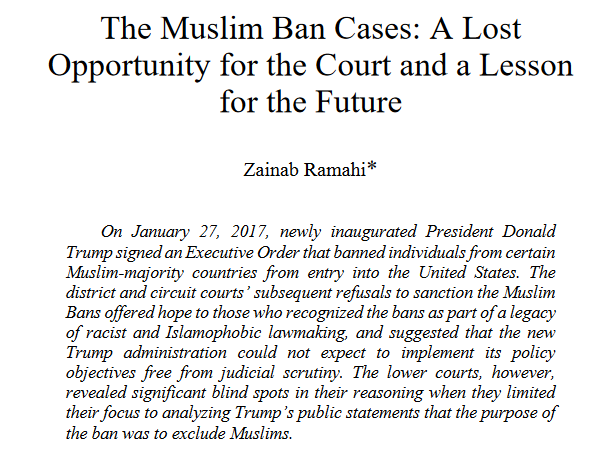 On January 27, 2017, newly inaugurated President Donald Trump signed an Executive Order that banned individuals from certain Muslim-majority countries from entry into the United States. The district and circuit courts’ subsequent refusals to sanction the Muslim Bans offered hope to those who recognized the bans as part of a legacy of racist and Islamophobic lawmaking, and suggested that the new Trump administration could not expect to implement its policy objectives free from judicial scrutiny. The lower courts, however, revealed significant blind spots in their reasoning when they limited their focus to analyzing Trump’s public statements that the purpose of the ban was to exclude Muslims.

The Supreme Court compounded these errors when it ignored these public statements altogether in its extraordinarily deferential review of the Executive’s action. Through its acquiescence, the Supreme Court accepted the construction of Muslims as a threat to national security. Trump’s bans provided the Court with a critical opportunity to correct basic distortions in race and immigration law doctrine, the specters of which continue to haunt the justice system. They also provided an opportunity for the Court to mature in its institutional role by recognizing and repudiating past errors and setting the terms for guarding against current and future failures.

The courts have a duty to protect “discrete and insular minorities.” Rather than paralyzing the courts, the fluidity of this category should provide courts with an opportunity for meaningful analysis of the social factors that influence executive and legislative actions. Courts can use this fluidity to course-correct and fulfill their institutional responsibility to prevent unconstitutional action arising from racial fear and mass panic.