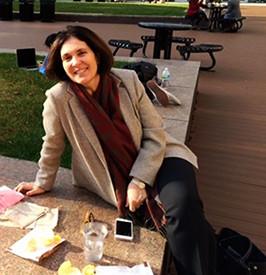 Karen Barkey has forged an impressive career from a simple childhood fascination with empire. Raised in Istanbul by a Sephardic Jewish family with a long history in the Ottoman Empire, Barkey found herself invariably drawn to stories about the Empire.  At its height, the Ottoman Empire encompassed parts of Europe, Western Asia, and Africa, and boasted significant populations of Armenians, Byzantine Greeks, Jews, and Assyrians. In the years since, Barkey has written two books on the Empire and taken on the role of director of the Institute for Religion, Culture, and Public Life at Columbia University, where she is also a professor of Sociology. Her research has largely focused on state centralization and decentralization, and state control and social movements in the context of empires. Most recently, she studied toleration, diversity, and accommodation in the Ottoman Empire, culminating in a book, Empire of Difference: The Ottomans in Comparative Perspective, published in 2008. In the fall of 2016, Professor Barkey will be leaving New York and continuing her scholarship in a new position at UC Berkeley as the endowed chair of the Haas Institute’s Religious Diversity research cluster, as well as a faculty member in the Department of Sociology. Sara Grossman of the Haas Institute spoke with Prof. Barkey about her scholarship and move to UC Berkeley. An edited verison of their interview is below.

Much of your research has focused on the Ottoman Empire. How did you become interested in this area of study? I was born in Istanbul, Turkey, to a Sephardic family of middle class parents and grandparents who believed in education, reading, languages, and dialogue. They were proud of their long history in the Ottoman empire, starting in 1492, their inclusion into the Ottoman polity, their close interactions with Turks, Greeks, and Armenians, and their reconfigured lives in the modern Turkish Republic.  As a result, the Ottoman empire became a site of curiosity and fascination for me at a young age.

As I grew older, I started seeing the layers of contradiction in the discourse about empire. I was living in Istanbul, a modern Republican city, yet also a multi-cultural city where the Ottoman cultures of the past were firmly embedded in the vistas of everyday life. However, the radical break that Turkish leaders engineered with the Ottoman past also weighed heavily in the air of the city.  For them, it was necessary to impose modernity and enforce silence on the Armenian genocide. They glorified the new nation-state to the detriment of empire. The school curriculums mimicked the new Turkish policies: they emphasized the first centuries of the Ottoman empire, teaching year after year of the glorious past, but fast forwarding over the bitter end, only to lionize the War of Independence.

This history was often disrupted by the books my father steadily fed my brother and me.  Yet, serious contradictions existed within my family as well. My grandfather who had experienced the transition in his lifetime from empire to nation-state, and who also fought for the empire, enjoyably argued that he preferred empire to nation-state.  He filled us with Ottoman poetry, imagery, arts, cuisine, and even more powerfully, with what he believed was the real test of empire: toleration and convivencia. He was a Jew in the Ottoman empire who believed in coexistence (not always peaceful, but repeatedly negotiated); he deeply believed that Jews, Muslims, and Christians in the Middle East were similar and sewn from the same cloth, and felt comfortable in the daily routines of coexistence, with linguistic, cultural, and economic reciprocity. Often I found myself transported into his Ottoman world, sometimes trying to understand it, at other times inventing it in my imagination. When I trained as a sociologist, I realized that I now had the tools to be serious about the empire.

What are you currently researching? Will you continue that research at Berkeley? I am currently researching and writing a book on Shared Sacred Sites.  The project blends comparative historical and contemporary ethnographic work. I am trying to understand the conditions under which the sharing of sacred sites (churches, shrines, mosques, synagogues, burial spaces) becomes possible between two or more religious groups. Once such sharing emerges, how does it get sustained over time? This project represents another facet of the work I have done previously, delving much deeper into the everyday life of the various religious groups in the Ottoman empire, their religious practice, their forms of coexistence, the meanings they attached to such sharing and mixing in religious spaces.  But it is also a larger sociological project about diversity, inclusion, and coexistence in historical perspective. It is meant to draw lessons about the examples of coexistence and inclusion that worked well in the past and, I argue, still do in contemporary situations. Apart from the book project, I am working together with a larger team to build a new and comprehensive website on shared sacred sites that will feature digital humanities projects, data sets, ethnographic, and multi-media work on the topic. This is not solely a documentation project but a way for us to get an analytic handle on the various choreographies of sharing holy sites.  We are also hoping to bring to New York and San Francisco a museum project on shared sacred sites that was previously featured at the MUCEM in Marseille. I am really excited to bring this project in its multiple facets, complexity, and richness to UC Berkeley next academic year.

Why did you decide to make the move to UC Berkeley? What was so attractive about the Haas Institute in particular?   The move to UC Berkeley and the Haas Institute, for me, represents the culmination of the work that I have done and want to further develop. I am truly excited to be part of a public university that shares so many of the goals of education and participation that I appreciate. I also feel that each of the parts of UC Berkeley that I will join represent the best and the strongest ideals in the service of society. The Berkeley sociology department has long been known for its strong commitment to studying diversity and inequality and serving a large number of diverse students from all walks of life and certainly the Haas Institute with its expansive work on inclusion and diversity will provide a natural home for me. I believe there is a community here for me in my departmental home, the Haas Institute but also in the Berkeley Center for the Study of Religion, and the numerous other centers around campus.

A major part of the Haas Institute’s work is a focus on inclusion and diversity to make society stronger. As a historian of empire, what have you learned about the success of societies that last? Based on your research, what are some important takeaways that today’s world leaders can learn from history? My previous book, Empire of Difference, compared the Ottoman empire to its Roman and Byzantine predecessors as well as its Habsburg and Russian contemporaries. I wanted to explore imperial longevity, tracking why and how imperial political formations had been successful at maintaining their preeminence for so long. Some of the answers I came up with are still important today; imperial institutional flexibility, cultural and religious diversity, and an inclusive understanding of difference. Especially in the Ottoman empire, difference was the norm and was understood as part of imperial society. The management of difference through institutional flexibility, negotiated practices, inclusion, and integration were key to empire’s maintenance. As long as society was able and willing to absorb the best talent from its peoples, creating a larger pool of talent than their own they were successful. The lessons of empire are very much about diversity, inclusion, and negotiation, though of course they also involve important issues about domination and coercion, but the practices of coexistence created wealth, knowledge, arts, and culture and they remain imperative for our world today. Empires also provide us with examples of when such coexistence can break down and why and we need to consider those episodes seriously as well.

Anything else about yourself that you’d like to share? We live in a world where religion has forcefully burst into the public arena, where religious divisions are salient, and where religion is perceived or discussed as the cause of numerous conflicts in the modern world.  As the world grapples with a refugee crisis of unique scale, issues of religious difference and tolerance have once more become relevant. Religion is often the identity that people use to rally communities together, resulting in the formation of bounded and closed identities and significant network closure.  As we focus on the narratives and the news of violence, we often ignore that in many places where ethnic and religious conflict occur, there has also been long periods of peace and coexistence.  My work is focused on bringing to light, analyzing and exposing the conditions behind accommodation and coexistence, not only when it is flourishing, but also when it breaks down.