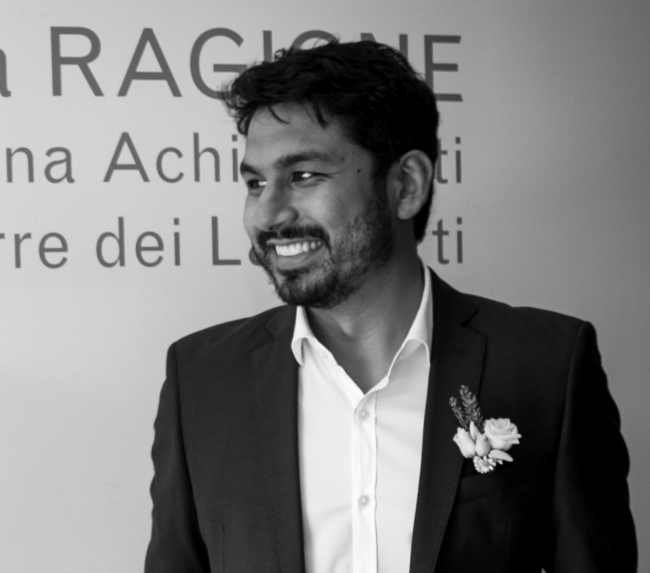 We are thrilled to announce our inaugural Toward Belonging Creative Fellow is Alexander Nezam, an experimental filmmaker who aims to use the power of filmmaking and participatory design to build belonging.

As Toward Belonging's 2021 Creative Fellow, Nezam will facilitate a long-form “participatory filmic poem” created by immigrant communities in Verona, Italy. The final film will feature disparate visual pieces woven together, where each subject demonstrates what othering or belonging looks like to them, including visual expressions  of belonging—such as the sharing of a meal or giving mutual aid to others—or representations of othering—such as the fascist iconography found throughout the city of Verona.

Notably, each of the subjects depicted in the film will oversee their own filming and direction, giving control of the narrative back to the individuals and communities portrayed. Nezam will act as the facilitator and editor of the project, weaving the individual segments together into an hour-long collective film exhibiting various stories of immigrant life across Verona.

The type of participatory filmmaking has been a throughline throughout Nezam’s work, as he has sought to transcend the barriers that separate the artist from the subject. Toward that end, he has predominantly worked with vulnerable populations whose voices are all too often exploited or disregarded by traditional forms of media. His most recent documentary, We Are Not Together (2019), explores refugee and immigrant communities trapped in Greece after the closure of European borders in 2016, and depicts the resulting political turmoil in Athens and on surrounding islands.

Nezam chose Verona as the spatial lens through which to examine “othering and belonging” because of its current and historical reputation as a home for racist and fascist ideologies—despite its moniker of “The City of Love,” as the setting for Shakespeare’s classic tale Romeo and Juliet. Indeed, nearly half of Verona’s population voted for Matteo Salvini’s far-right populist coalition in 2018.

Yet he also sees hope and belonging in the communities who are often targeted as racial or religious “others.” “I’ve lived here for almost three years and I’ve witnessed countless inspirational acts of solidarity and humanity,” Nezam wrote in his application. “To explore belonging in the city of Verona wouldn’t be an exhibition of unwavering goodwill toward immigrants, but it would be its own act of solidarity and a recognition of the seeds of belonging in a society very quick to ostracize.”

He adds that Verona is an “apt microcosm of competing political philosophies in Europe, and this moment offers us the opportunity to empower the voices of those caught in the middle of that ideological war. It would be a way to create dialogue; to address problems and to explore possible solutions while honoring the history and identity of ‘The City of Love.’”

The Toward Belonging Creative Fellowship is meant to support an artist or designer in exploring and developing innovative ideas that address one of Europe’s belonging challenges. When reviewing applications, we specifically looked for concepts that would further belonging by analyzing its challenges, display empathy and connection with all, and offer creative and achievable solutions, particularly those that address the ways systems, places, and structures impact our lives.

Nezam says that he is interested in Toward Belonging’s work because it seeks to “dig into the details of design and structure on the political, social, and organizational level.” “For me, that's where the real battleground is,” he says. “As a visual artist I take that very seriously, and I find [that] approach enormously valuable and refreshing.”