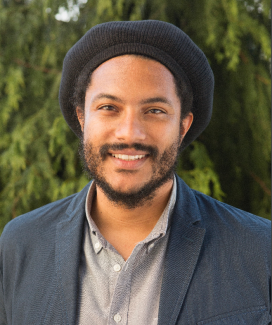 From an early age, Jovan Scott Lewis had his feet firmly planted in two very different worlds: Montego Bay, Jamaica and Lauderhill, Florida, the latter of which is well-known for its high population of Jamaicans. “I was aware that I was a part of these two “Jamaica’s,” Lewis said in a recent interview. “And have been shaped from then by a kind of “diasporic positionality" of contrast and similarity.”

Today, Lewis lives far from both these formative places, having recently joined the UC Berkeley faculty as an assistant professor in the Departments of African American studies and Geography. He is also the newest member of the Haas Institute’s Economic Disparities research cluster, where he hopes to bring the insights of his field, economic anthropology, into spaces where the discipline has traditionally felt uncomfortable engaging, like public policy.

Economic anthropology posits that the economy is a product of social relations and frameworks, not simply market transactions. “In practice there are multiple economies, or at least perspectives on the economy where the experiences of inequality, poverty, and race bear upon how those economies are lived,”  Lewis said. “And what kinds of contingencies are available when they fail.”

Lewis found his niche in the field rather serendipitously. He was more interested in anthropology, specifically in studying the Jamaican discourse of “sufferation”, something he had heard often in his youth. He pursued a Ph.D. in Anthropology at the London School of Economics, looking to do fieldwork on this discourse. “Through the process of fieldwork and preliminary and subsequent reading, it became clear that the work of economic anthropologists was most useful in helping me frame my work,” Lewis said. “It was never a matter of setting out to become an economic anthropologist per se, but just an anthropologist.”

For his thesis, Lewis examined what he determined were “ethics” in operation in the economy in Jamaica. These ethics, he concluded, were cooperation, rights, and a radical form of accumulation—“radical because it was a cultural and historical deviation from the former two”—and shaped the ways that Jamaicans, especially poor, black Jamaicans, understood their place in the economy. Lewis argues that these ethics were borne out of “particular formative moments in Jamaican political and economic life,” noting that the importance of cooperation in Jamaica is rooted in the social necessities of life after the fall of slavery in Jamaica. “The notion of rights became a salient feature of Jamaicans’ social identity through the process of the anti-colonial independence movement,” Lewis said. “However, in both cases there was a constant of collectivism and community. So, in this latter stage of accumulation, that accumulation is regarded as radical because it breaks with the dominant collectivist ethos that I argue have been so integral to Jamaican social and economic life.”

A chapter of his thesis, entitled “A So Black People Stay: Bad-mind, Sufferation, and Discourses of Race and Unity in a Jamaican Craft Market,” was published July 2015 in the Journal of Latin American and Caribbean Anthropology. In the paper, Lewis argues that Jamaican craft vendors vendors construct an “ethnicized framing of the market” through which “inferences of citizenship and racial discourses are produced.” The economy begins to be seen through the experiential lens of race and inequality, which itself becomes identified with, and perhaps even defined by, those economic outcomes. This eventually leads to a kind of normalizing of expectations, and to a particular kind of teleology. “For the vendors in the article, their failure in the tourist craft market was based upon an inability for black people to unite, which to their thinking would have allowed for their success,” Lewis said. “So their framing of the market was one of failure, that was inevitably determined to be so by their logics of race.”

As with many Haas-affiliated researchers, much of Lewis’ research explores the intersections of poverty, race, and inequality. Lewis argues that poverty is the product of failure “in or of the economy,” and says that for many poor, that failure is due to a structural and systemic lack of access to the means of economic productivity. Lewis says that for many among those poor, that inequality is based upon a prejudiced racial ideology. “But in my work, that is not the only relevant factor of race,” he said. “For me, it’s critical to understand how all three become conflated, and how that conflation is acted upon within society generally, but also within those particular communities of the raced poor.”

Looking forward, Lewis plans to continue ongoing research in Tulsa, Oklahoma, researching the infrastructures of inequality and poverty in the community, as well as “how race is used in the rationalizing and understanding of those infrastructures, or the lack thereof.”