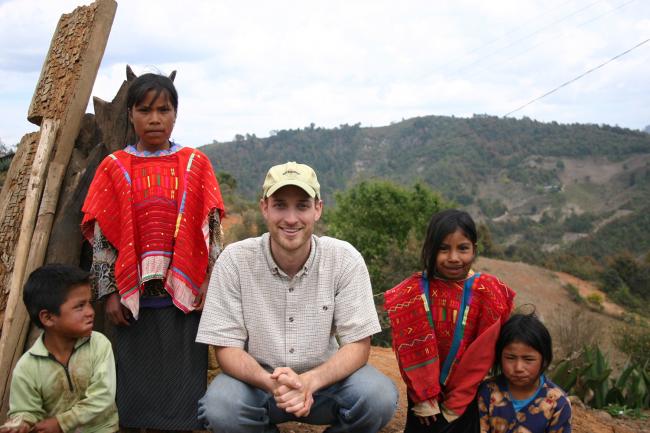 Seth M. Holmes is a professor in the UC Berkeley School of Public Health and Graduate Program in Medical Anthropology and a member of the Haas Institute Diversity and Health Disparities Cluster. Holmes is the author of Fresh Fruit, Broken Bodies: Migrant Farmworkers in the United States, which examines the lives and challenges of Mexican migrants working on American farms.  Since its publication, the book has received national attention and numerous awards, including from the American Anthropological Associationm which awarded Holmes the prestigious Margaret Mead Award for his contributions to “broadening the impact of anthropology.” Here, Prof. Holmes discusses how trade agreements, racism, and anti-immigrant hierarchies have radically altered the lives and health of the laborers whose work supports the very basis of America’s food system.

Talk a little bit about your new book. What’s it about? How long did it take?

My book is called Fresh Fruit, Broken Bodies: Migrant Farmworkers in the United States. I spent 18 months living with and migrating with native Mexican farmworkers in Washington State, where we lived in a labor camp and picked strawberries and blueberries, and then in California, where we were first homeless, living out of a car and then in a slum apartment that would rent to people without a credit history. We also lived in the migrant workers’ home village in Oaxaca, Mexico, where we harvested corn, and then crossed the border into Arizona through the desert and got caught by Border Patrol and were placed in Border Patrol jail. In each of these sites, I accompanied the migrants to the doctor or the clinic whenever they were sick or injured.

"At Berkeley, we have a history of engaging the methodology of participant observation in a reflexive and embodied way, taking seriously not only the bodies of the people we’re trying to understand, but also our own bodies, in terms of how our bodies are read by other people and what data we gain from our own bodily experiences."

What compelled you to embed yourself with these migrants, rather than just do interviews or other forms of research?

The classic methodology for anthropology is called “participant observation”. At Berkeley, we have a history of engaging the methodology of “participant observation” in a reflexive and embodied way, taking seriously not only the bodies of the people we’re trying to understand, but also our own bodies, in terms of how our bodies are read by other people and what data we gain from our own bodily experiences. The other thing we have a strong history of at Berkeley is what Prof. Laura Nader calls the “vertical slice,” which is to say that we don’t tend to study just one group of people, but rather the whole slice of people involved in a particular phenomenon, in this case US agriculture.  In my research, the vertical slice involved spending time with farmworkers, but also interviewing and spending time with the supervisors on the farm, the area residents, and the doctors and nurses in order to try to understand these various perspectives and experiences.

On a separate note, part of the reason I did this research is that I grew up going back and forth to Mexico with my family, to an orphanage where my parents volunteered, and where my brothers and I just played with the kids. I think I grew up a bit of an anthropologist or sociologist in a way, leading me to want to understand who these people are who are caught in the irony of providing the American public with food we need to be healthy and at the same time are often overlooked or even vilified in the media as “illegal aliens” or criminals.

How did you prepare or plan for your research on the ground with these migrants?

First, I visited the village in Oaxaca, met with people there and learned about what their lives were like. Next, I met with people up in Washington State on the berry farm, got permission from the farm owner to live in the shacks, got to know some of the indigenous, native Mexicans there and on some level had to trust that if I started living in the labor camp shack engaging in “participant observation”, I would learn important things about food, labor, health and race or racialization in the contemporary world. I also read a lot of books by anthropologists who engage social theory to take on social hierarchies, ethnic hierarchies, citizenship, and who write in a way that’s compelling.

Did you have trouble getting people in authority to talk to you?

The farm owners were surprisingly open to learning and sometimes even walked around, with me translating, to hear from farmworkers about what could be changed and improved. The area residents and public health officials were open to talking with me. The doctors and nurses were happy to talk to me — I’m also an MD and at the time I was a medical student while doing my research so they were used to having a medical student asking questions. Even though we went through informed consent and explained the research I was doing, there is a way that physicians don’t expect to be the subject of research. Health professionals are used to being the experts who teach people things or do research themselves — they are not used to being analyzed. The group of people that got upset with me was the doctors, which was surprising to me because I was training to be a doctor myself and I thought that we would be on the same team in terms of wanting to make the world a better place in certain ways.  However, after sharing preliminary research with the health professionals – as well as farm workers, farm supervisors, and area residents – who were involved in this project, I was glad to be able to respond to feedback and concerns.

Broadly, can you offer some insight as to why our food and health systems are so unequal? What are some of the conclusions from your research?

"I was most surprised and dismayed by how we as a society come to see inequality as something that is normal and natural."

Were you surprised at all by anything you discovered?

I was most surprised and dismayed by how we as a society come to see inequality as something that is normal and natural. One of the things that I saw over and over in my fieldwork was that a lot of inequalities are normalized through metaphors of ethnic difference. I heard many people say things like “those Mexicans should be picking berries because they are lower to the ground.” Or “Mexican bodies don’t hurt as much as American bodies, so they should be doing that kind of work and we shouldn’t.” And even from other Mexicans I heard that indigenous people have stronger tougher bodies than the white Americans, so they should be doing the harder work.  These are some of the ways that racism and biology and genetics are used in metaphors to justify inequality and exploitation, including inequality that leads to poor health, disease and injury.

Can you speak about some of the aspirations of these migrant workers? Did they seem to have a desire to achieve the “American Dream” or was there a feeling of inevitability in their work, they have to do this work, and their children will do this work, etc.?

None of the migrant workers I studied wanted to achieve the American Dream. The farm workers I worked with all had small organic family farms of their own in southern Mexico and they explained that they would rather be back home on their own land. But because of international trade agreements and international developments that have been very unequal, they have been forced to leave their homelands to work as piece rate laborers on farms in the US. But when I asked what they would most like to see change, they said something like, “We want to be back home.” or either, “We want permission to come and go for a season and not have the border be so difficult and dangerous to cross that we end up staying here against our will" or, "We want more equitable global economics where we can live and survive on our own farms.”

What broader national or international policies would you prescribe to lessen the exploitation of these workers?

Someone at a talk I gave recently asked me if my book could do anything, what would I want it to do? And my answer was if my book could do anything in the world, I would want it to renegotiate the North American Free Trade Agreement [NAFTA], because most of the undocumented native Mexicans I know who have left their farms to work on US farms were forced to leave largely due to NAFTA and similar economic agreements. Many researchers have looked into the effects of NAFTA on family farmers in Mexico and have seen that while NAFTA disallowed Mexico from having tariffs to protect its citizens, it did not stop the US from using inverse-tariffs that we call subsidies to protect its products. This, in fact, is not “free trade,” but actually the most unfair trade of all because the less wealthy country is at an extreme disadvantage and the more wealthy country can take advantage of its financial flexibility. Since NAFTA was signed, the U.S. has raised domestic corn subsidies by over 300 percent. During my field research, I saw more and more corn from the US undercutting locally grown corn in Oaxaca. Oaxacan people who grew enough corn to eat but needed a little bit of extra money to pay for electricity so their kids can study at night or pay for uniforms so their kids can go to the free public school, can’t do that anymore, so they feel forced to leave. In a sense, that would be my proposal for immigration reform. We need to do something that renegotiates international trade so that there aren’t as many inequalities between Latin America and the US, because many people would likely stay and not feel forced to cross international borders.