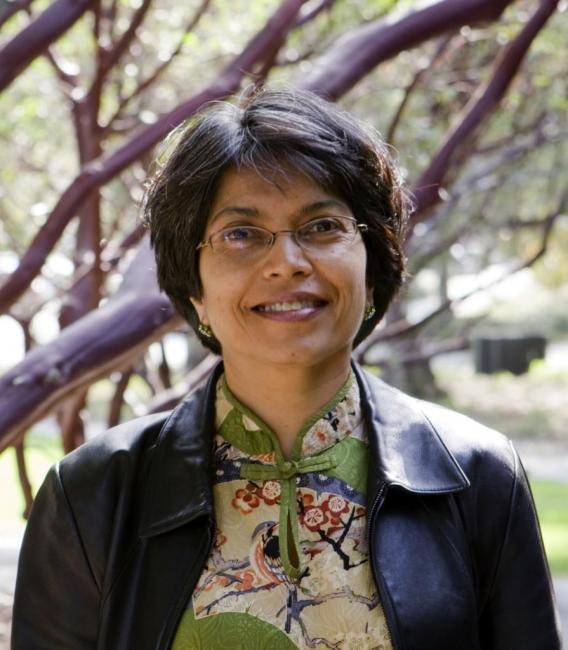 Professor Saba Mahmood is a member of the Haas Institute Religious Disparities cluster and a professor of Sociocultural Anthropology at UC Berkeley. Mahmood’s work is known for its interrogation of liberal assumptions about the boundary between ethics and politics, freedom and unfreedom, the religious and the secular, and agency and submission. Mahmood’s new book, Religious Difference in a Secular Age: A Minority Report (Princeton University Press) will be published in October this fall. Sara Grossman from the Haas Institute interviewed Professor Mahmood about her new work about her scholarly focus.

To begin, talk a bit about your new book.

The plight of religious minorities in the Middle East is often attributed to the failure of secularism to take root in the region. My book, Religious Difference in a Secular Age, challenges this assessment by examining four cornerstones of secularism—political and civil equality, minority rights, religious freedom, and the legal separation of private and public domains. We tend to think that secularism is a solution to the problem of religious strife, but my work shows that the modern secular state has in fact exacerbated existing religious differences, polarized religious identity, and heightened religious inequalities. So instead of thinking about secularism as a solution to communal strife, I propose that we need to think about it as part of the problem.

Can you give an example of how secularism is the problem?

Well, one example is that under modern secularism, religion comes to be privatized and relegated to the domain of private law which is supposed to govern religious matters. What’s interesting is that in addition to religion being relegated to the private sphere, the family and sexuality are also relegated to this sphere under modern secular governance. This tends to create a pernicious symbiosis between them that is historically unique. In my book I show that historically, religious identity and doctrine were not so tightly bound up with issues of family and sexual governance as they are now; that, with the secularization of modern societies, as religion lost power in other domains of social and political life, its authority came to be telescoped in the domain of family and sexuality. This entwinement of issues of sexuality, religion and family is manifest in global struggles over gay marriage, abortion, and family values. We tend to think that the reason these debates take religious overtones is because family and sexuality are essentially moral issues. But historically, religious morality was far more broader and copious than what it has become in the current period. It is the process of secularization, I suggest, that has created a noxious cathexis between religion and sexuality.

If religion is now more privatized, how is religion different than when it was more public and in the sphere of the state?

In the premodern period, religion was the epistemological condition for the conduct of all of life. We tend to think that religion is its own thing now, but this was not the case for medieval Christians, Jews, or Muslims—religion was much more integrated with all the spheres of life such that it was impossible to separate them conceptually or practically. But when religion is relegated to its own sphere, something people only do on Sunday,  in the privacy of their homes or places of worship, then it becomes something else, it doesn’t remain what it was before.

Tell us a bit about your field research.

I did field work with legal aid organizations in Egypt that champion the rights of religious minorities as well as with non-Muslim minority rights groups—particularly Coptic Orthodox Christians and Bahais. The legal aid organizations use existing Egyptian and international laws to challenge the unequal treatment of non-Muslims in courts. Aside from this field work, I also studied the fate of religious minorities in European courts in the contemporary period.  As a result, a large chunk of my book is a comparative study of legal judgments in European and Egyptian courts regarding religious minorities. This study shows that, contrary to our expectations, the kinds of restrictions placed on the public expression of religious symbols of minorities in Europe and Egypt are very similar as are the secular legal arguments used to justify these restrictions.

Secularism’s foundational promise is to keep religion and state apart, and to make the  religious identity of citizens irrelevant to the  distribution of political and civil rights. This is a unique political development in world history, one that makes the ideal of religious equality (if not its realization) a global norm. As a result, we tend to think that secularism is an antidote to the problem of religious strife. In the last twenty years, this understanding of secularism as the separation of religion and state has been fundamentally challenged. Scholars like myself and others argue that the modern secular state does not simply retreat from religion but has become deeply involved in its management and reorganization, fundamentally transforming what it means to be religious today. Much of this new scholarship tracks the cultural and political life of this double movement: the ideological promise of secularism to keep religion and politics apart on the one hand, and the involvement of the modern state in the production of religion on the other.

Do you have any vision for the future that might be more inclusive than the secular system we have now?

For a long time, modern social theory prophesied that with the institutionalization of the secular state, religious conflict would decline and, indeed, religion itself would wither away.  Clearly this is not the case if we look at events of the last half-century. So the question before us as researches is how to explain the social conditions that have contributed to the exacerbation of communal conflict, key among these the secular institutions, ideologies and practices that were supposed to solve the problem but have in fact made things worse.  As for a vision of the future: I believe that before we begin to think of alternatives, we need to first understand how secularism has contributed to the exacerbation of religious violence. For most people, including academics, this is a novel idea.  So before we reach for solutions, we need to better grasp what the problem is.