Today is what used to be called “Election Day,” but is better known this year as the last day to vote. Under conditions more inimical to voting than the country has seen in generations, voters have shown their resilience and determination to cast ballots in what will surely be a historically high-turnout election.

A global pandemic that has disproportionately affected our Black, Latinx, and Indigenous communities is only one of the barriers that might have kept voters away this year. Were Covid-19 not enough, those same communities—and the country as a whole—are also struggling against scourges of mis- and disinformation, white-nationalist intimidation and vigilantism, and state-imposed obstacles, all bent on suppressing the vote.

And yet, following the example of the civic leaders, largely Black and young, who faced down these same barriers to build the largest mobilizations in US history this year, voters are braving every condition to exercise the right to vote.

Even before the opening of “Election Day,” at least 98 million US voters have cast their votes, whether by absentee/mail ballots, or in person at early voting sites. The real number surely exceeds 100 million, given processing delays in some states and mail ballots still en route to elections offices.

This is by far the largest number of early votes ever cast in a US election. In 2016, there were around 139 million ballots cast in total. Four states actually eclipsed their 2016 vote totals before polls opened today, and several others had very nearly done so. Below are reliable estimates courtesy of the US Elections Project. 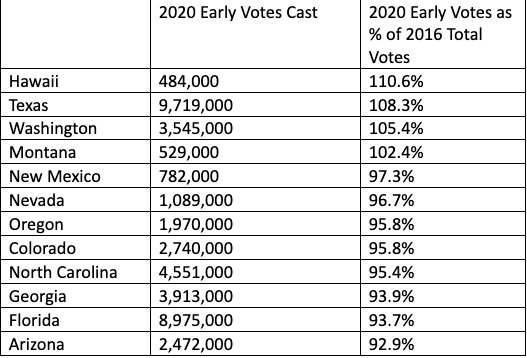 Each of these states is more than 90 percent of the way to its 2016 turnout total, meaning that they will all shatter those voting numbers in 2020. The early vote numbers portend a significant overall turnout jump – probably one of around 20 million nationally, for a total of 155-160 million voters. Still, it is worth emphasizing that before you went to bed last night, the majority of votes in this year’s election had already been cast.

Based on what we can tell from data so far, who has voted is also noteworthy. Of those 98+ million early voters, more than 1 in 4 were people who did not vote in 2016. Almost 8 million early voters had never voted previously in their lives. According to the voting data firm TargetSmart, “the biggest surges in turnout are coming from Asian-American voters, who have exceeded their total 2016 vote in every single southern and sunbelt presidential battleground state already. We are also seeing massive surges from Latino, African-American, and white college-educated voters, as well as women, broadly, especially unmarried women.”

How to Watch the Vote Count Tonight (and Tomorrow, and the Next Day, and…)

While we know how many voters have cast ballots early, we won’t know for whom any of them voted until after polls close today. This is normal, but the process of watching the results will be more complicated this year. That is because different states count and release the results of absentee/mail ballots on different timelines, and these ballots will be a larger share of the overall vote than ever before. My hope is that the following paragraphs will help readers navigate the difficult week (or more) of election tracking ahead.

To begin, the reason that the order in which states count absentee/mail versus in-person ballots will create heightened anxiety is the large partisan discrepancy in who is using which method to vote. For months, Donald Trump has inaccurately characterized mail voting as more susceptible to fraud, and encouraged his supporters to vote in person. Surveys and early-voting data both show that those supporters are listening – choosing overwhelmingly to vote in person, either early or today, rather than by mail. Democratic voters on the other hand are more likely to vote by absentee/mail ballot. The most recent data from the Democracy Fund-UCLA Nationscape survey finds that 51 percent of Joe Biden supporters will vote with a mail ballot, compared to only 26 percent of Trump supporters.

The unprecedented amount of mail and early voting this year combined with this partisan discrepancy will lead to initial, partial vote counts that are far-from-accurate reflections of the final tallies once all ballots are counted. The problem will be most acute in battleground states in which election officials can only begin opening, verifying, and counting mail ballots as of today. These “late-counting states” include Pennsylvania, Wisconsin, and Michigan (though Michigan has a one-day head start on verifying, but not counting, mail ballots). The results reported tonight will include few if any of the millions of absentee/mail ballots cast by voters in these three states.

At the end of the night tonight, then, because results for Pennsylvania, Wisconsin, and Michigan will only reflect in-person votes, they will heavily favor Republicans. When absentee/mail ballots are counted in the following days, those ballots will trend toward Democrats.

It's important to note that while all three of these states are competitive presidential battlegrounds, polling shows Biden ahead comfortably in Michigan and Wisconsin (high single digits) – by much more than Hillary Clinton in the 2016 polling miss—and with a stable, if more modest, lead (4-5 points) in Pennsylvania. But we should not expect to see that tonight. Models that I have seen (for Pennsylvania) or created (for Wisconsin) based on when votes are counted and how voters say they will cast their votes predict shifts of approximately 20 points from when we see partial results available tonight until all of the votes are counted. Concretely, that means it is likely to look as though Trump leads by 12-18 points in Wisconsin and Pennsylvania late on the night of November 3, followed by a gradual shift toward Biden in both states as absentee/mail ballots are counted over the coming days. That is what we know to expect – and what Trump’s campaign is expecting as well. More on that below.

A number of “Sun Belt” battleground states will tally their votes quite differently. Election officials in Florida, Arizona, and North Carolina – all highly competitive in the presidential race – have been verifying and counting ballots already for weeks. They will be ready to release the results tonight, not long after polls close. When these states begin reporting, the partial results may look more favorable to Democrats than the final counts, as absentee/mail votes will constitute a larger share of early returns. This inaccuracy however will be much smaller, and much shorter lived, than those in the late-counting “Rust Belt” states. We will begin to see an accurate picture within hours after the polls close, and, unless the margins are extremely thin, we should know who won Florida, Arizona, and North Carolina before midnight.

When we do, we may know the winner of the presidential election. All three of Florida, Arizona, and North Carolina are states that Donald Trump won in 2016. If Biden wins any two – or certainly all three – the race is essentially over. The late-counting states of Pennsylvania, Wisconsin, and Michigan will decide only the final Electoral College margin of a Biden victory.

But if Biden is to win none of Florida, Arizona, and North Carolina – or only Arizona, where forecasters give him the best odds – we will be in for a long couple of weeks.

Trump and his campaign have already not just signaled, but indeed broadcast, their plans to prematurely claim victory, and tie up as many ballots in court as possible. The late-counting states afford the opening. The Trump team knows that the appearance–however predictably inaccurate–of a “lead” in these states, combined with close races elsewhere, opens the door to his declaring victory, and then delegitimizing shifts in the vote margins as the results become complete. They themselves have said as much! Consider New York Times reporting that,

Trump advisors said their best hope was if the president wins Ohio and Florida is too close to call early in the night, depriving Mr. Biden a swift victory and giving Mr. Trump the room to undermine the validity of uncounted mail-in ballots in the days after.

One certainly hopes that major media covering the election results tonight have taken notice of this plan. It has been foreseen by many for months, and its open airing by Trump and his associates has been reported elsewhere as well. 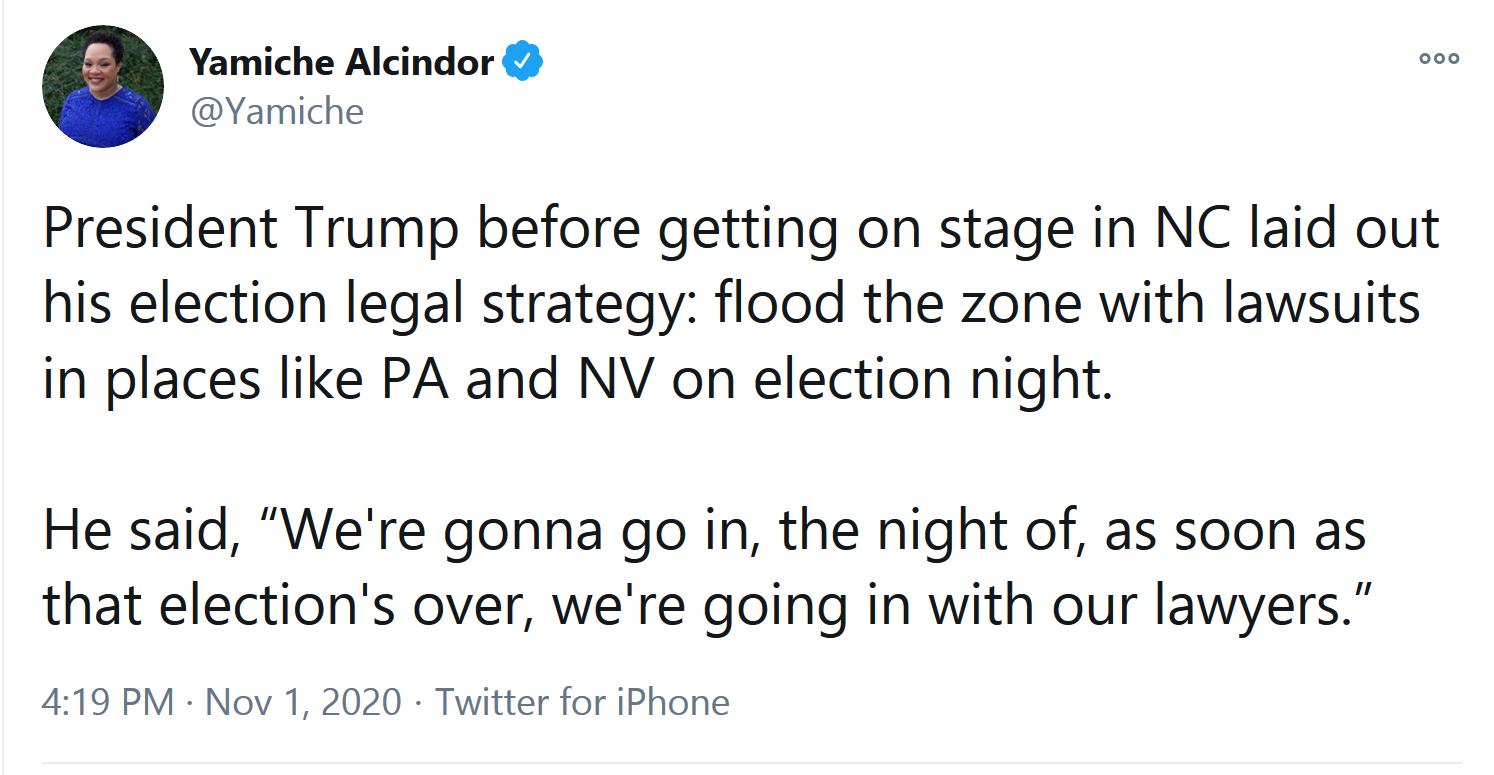 If Trump prematurely and illegitimately claims victory—as he hopes to have the opportunity to do—a number of scenarios could unfold next. My colleagues at the Institute, together with partners at the What’s Next Network, have contemplated some of these, and how we might respond.

Undoubtedly the best scenario would be if all of us—equipped with the information and expectations above—could simply ignore a premature and illegitimate claim of victory, and that the vote count go forward undisturbed.

But in any scenario, the only acceptable outcome will include that same end result: For every vote – each one cast by we the people, against so many odds in 2020 – to be counted, and “heard.”

The vote belongs to us.

Note: For a concise analysis of when to expect full results to be available in each state, and what partisan shifts to anticipate based on counting procedures, see this piece by Nathaniel Rakich and Elena Mejía. The author thanks Ben Malley for input and feedback contributed to this writing.