The shocking deaths of Alston Sterling and Philando Castile this week, accompanied by wrenchingly painful video, are tragic reminders that all the protests, national attention on race and policing, and calls for reform have failed to abate, let alone slow, the epidemic of extreme violence against black bodies by law enforcement.  Despite the outcry over the deaths of men and women such as Michael Brown, Walter Scott, Freddie Gray, and Eric Garner, and the emergence of the #BlackLivesMatter movement, 2016 is on track to outpace 2015’s outrageous number of police killings.

Moreover, justice and accountability has proved frustratingly elusive. Three trials have been held for police officers involved in the death of Freddie Gray, resulting in two acquittals and a deadlocked jury.  An Ohio grand jury decided last December not to indict the officer who killed 12-year old Tamir Rice. This, after grand juries in 2014 decided not to indict the officers involved in the deaths of Michael Brown or Eric Garner. Some say that ‘those who fail to learn from the past are doomed to repeat it.’  Mark Twain retorts that history rhymes rather than repeats.The horrific shootings of police officers in Dallas last night in the midst of a peaceful protest signals a darker turn of events, and echoes the violence and civil disturbances of 1960s triggered by similar circumstances. 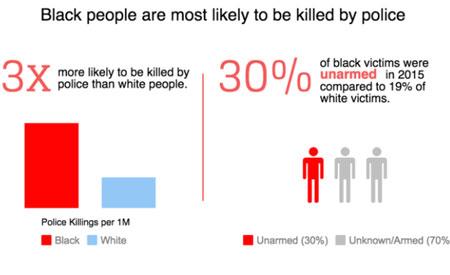 Critically, these disturbances peaked in late July with large scale riots in Newark and Detroit. At the end of that fateful month, President Johnson convened a commission to investigate the causes of these events, and the Kerner Commission’s “Report of the National Advisory Commission on Civil Disorders” stands as a landmark statement on racial inequality in American history. Consider a few of the inciting incidents described by the Report:

Although different in the particulars, such incidents are all-too familiar.

In another frightening historical parallel, this month features the Republican and Democratic National Conventions. The 1968 Democratic Convention, held in Chicago the same year that both Robert Kennedy and Martin Luther King Jr. were assassinated and in the heat of anti-war protests, was marred by violencebetween protesters and police (with historians generally blaming the police for the violence). The city of Chicago sought to tamp down possible violence by denying protester permits, and by calling in more than 20,000 law enforcement officials, including the National Guard.

Already, the ACLU settled a lawsuit with the city of Cleveland regarding security restrictions on protest sites for the Republican convention this year. Given Donald Trump’s demagogic campaign for the presidency, featuring a litany of racist, xenophobic, and otherwise bigoted remarks, and the violence that has alreadyerupted in several of his campaign events, it is not difficult to imagine how the Conventions may become a focal point for civil disorder and further violence.

As the Kerner Commission observed, “[a]lmost invariably, the incident that ignites disorder arises from police action.” This was also true of the 1968 Democratic Convention. Importantly, however, the Commission noted that, among the incidents it investigated, “[d]isorder did not typically erupt without preexisting causes… Instead, it developed out of an increasingly disturbed social atmosphere, in which typically a series of tension-heightening incidents over a period of weeks or months became linked in the minds of many in the Negro community with a shared reservoir of underlying grievances.”  In particular, the Commission cited discrimination, segregation, disadvantaged conditions, and police harassment and abuse, as underlying causes. These inciting incidents then became the trigger, “culminating in the eruption of disorder at the hands of youthful, politically-aware activists.”

The Commission concluded with a wide ranging set of recommendations relating to housing, employment, education, and policing, only a handful of which were ever implemented. Little wonder the Commission ruefully acknowledged, in 1968, that “the conditions underlying the disorders will not be obliterated before the end of this year or the end of the next,” and called for a “commitment to confront those conditions and eliminate them.” And, in a warning that we have failed to heed, explained that “so long as these conditions exist, a potential for disorder remains.”  Little wonder we are dealing with many of the same issues nearly five decades later.