Building Power at the Intersection of Immigration and Incarceration: An Event to Discuss Inclusive Practices and Policies in the “Double Is” 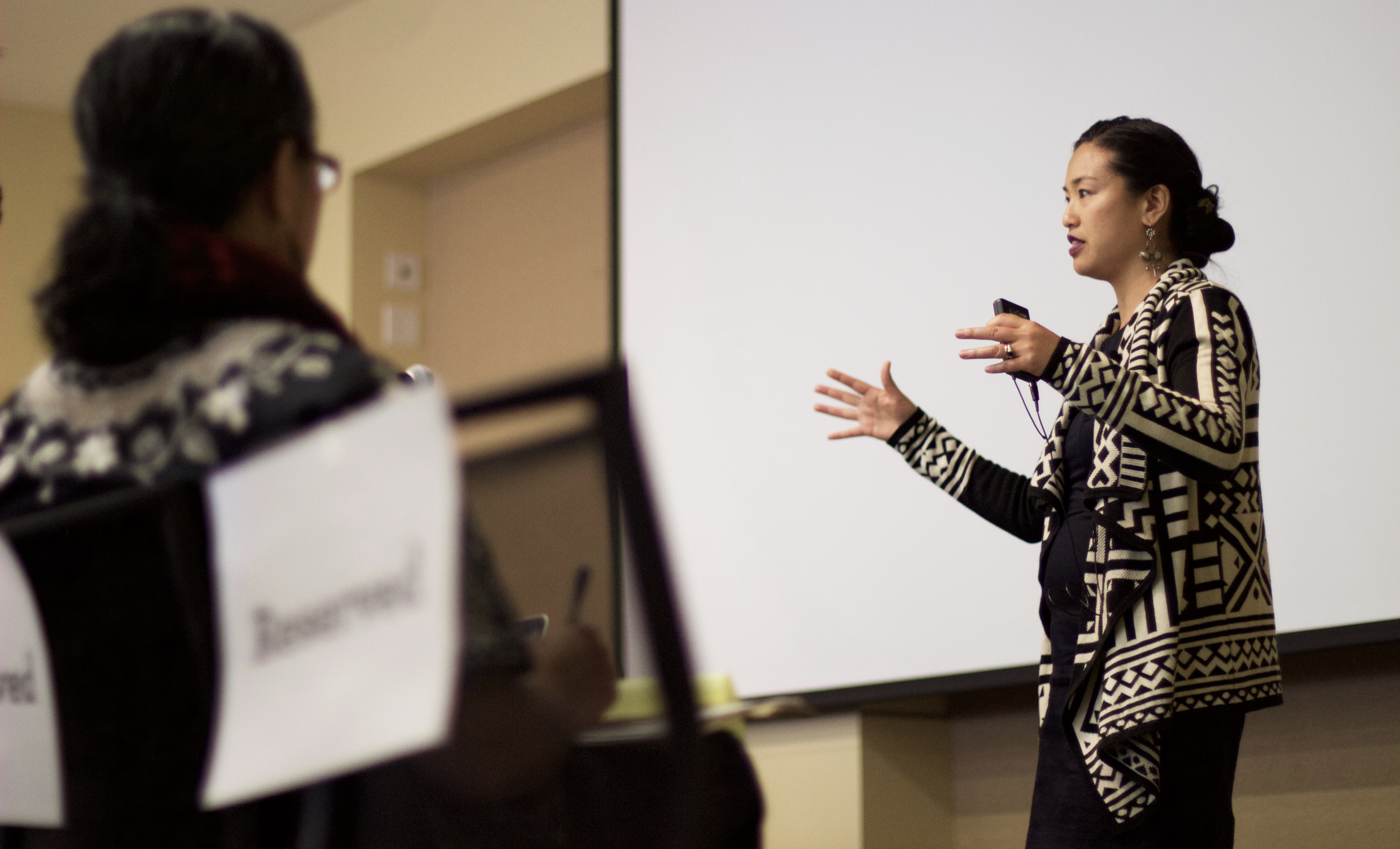 john a. powell began his keynote address with a comment on anxiety.

In California, he said, whites are no longer the majority, nor even the largest plurality. For many people, this creates “tremendous anxiety.”

“But how people process that anxiety is based on leadership and the stories we tell,” he said. “Do we tell stories of that people don’t belong? Or stories where all people belong?”

powell, who is the director of the Haas Institute as well as a Professor of Law, Ethnic Studies and African American Studies at UC Berkeley, was speaking to about 50 activists, organizers, lawyers, scholars, and others who had descended upon the David Brower Center in downtown Berkeley last Tuesday for We Too Belong: Building Power at the Intersection of Immigration. The event was a half-day, interactive affair hosted by the Haas Institute where participants could discuss and share best inclusive practices in immigration and incarceration law, policy, and advocacy.

“We need to create a sense that everybody belongs,” powell continued. “We need to rescind these laws and policies that tell people they do not belong.” These laws are contributing to the mass incarceration and mass deportation of large segments of our population, he said.

powell reminded the audience of possibly the most famous speech in American history, Abraham Lincoln’s Gettysburg Address, in which Lincoln called for a government “of the people, by the people, for the people.” We must continue to work towards Lincoln’s vision of inclusion, powell said, one where all people are created equal.

Ultimately, powell concluded, much of that work depends on the stories we tell.

The Haas Institute’s We Too Belong event aimed to tie together two seemingly distinct narratives: that of mass incarceration and that of immigration. In fact, as powell told the audience, these dual phenomena are actually two critical facets of the same root issue: Othering. We live in a society that, through its systems, policies, and cultural norms, denies many of us the right to belong. Two of the largest ways it denies widespread access to “belongingness” is through our systems of immigration and incarceration, systems that are inherently racially coded.

The Haas Institute invited six distinguished speakers to discuss their experiences with the immigration or incarceration systems, with a special focus on those working at the intersection of the two. Speakers included Jorge Gutierrez of Familia: Trans Queer Liberation Movement, Richmond community organizers Claudia Jimenez and Tamisha Walker of Safe Return Project, Piper Anderson and Marlon Peterson of SpreadMassLOVE, immigration attorney Raha Jorjani, Aparna Shah of Mobilize the Immigrant Vote and Tia Oso of the Black Immigration Network

Oso explained that much of the Network’s work is with political education, to expand understanding of root causes of inequity and injustice, Oso said. “People look at [incarceration] with a lot of shame and confusion,” she said. “They don’t see poverty and disenfranchisement and all of those factors. [They] see ‘this person was hustling and that’s why they got locked up.’”

The Network aims to popularize this analysis that emphasizes structural failings over individual ones and initiate conversation around it. It is currently developing a curriculum to teach these complicated social issues.

“In talking to the community, the need to articulate this analysis is really key to us,” Oso added.

Piper Anderson and Marlon Peterson of SpreadMassLOVE—an organization based in New York—also emphasized the value of education in spreading their message of love in an era of mass incarceration. They offer workshops where participants can discuss how incarceration has affected the way they love and relate to others in their life.

“We wanted to share how these systems affected how we interact and love,” Peterson said. “How do we do the opposite of spreading mass incarceration, criminalization?”

Aparna Shah, Executive Director of Mobilize the Immigrant Vote (MIV), echoed the need to communicate directly with the communities affected by these policies and systems. “We go back to our communities every single year,” she said.

MIV grew out of six women of color recognizing the problems with activists “parachuting in” to low income communities and telling them to vote for specific people or policies and promptly leaving, Shah said. Today, MIV is a multiracial immigrant alliance that works to amplify the voices of low-income immigrants and refugees of color by building voting power in California.

Following the outbreak of a national dialog surrounding police brutality and race in 2014, MIV realized there was an opportunity for immigrants to “show up strong for Black lives.” They now focus on “culture work” to create policy changes in communities, systems, and structures. “In that space, there was a yearning for a bigger way of imagining [the world] and [thinking about] how we can see ourselves in each other, our destiny’s in each other,” Shah said.

We can’t do our work in silos, Shah said, for it’s in integrated spaces where real power is built.

Jorge Gutierrez of Familia: Trans Queer Liberation Movement works in such an integrated space: at the intersection of LGBTQ rights and immigrant rights. Gutierrez used his time at the podium to discuss the effects of mass incarceration and detention on trans women, specifically touching on how they are often detained in male facilities, although they may identify as female.

Claudia Jimenez and Tamisha Walker of the Safe Return Project also work in integrated spaces. Jimenez discussed her experience leading conversations in immigrant communities about both the impact of US immigration policies and how it intersects with issues of mass incarceration. They were difficult conversations, she acknowledged, as they had to work through deeply held suspicions and stereotypes about current and former incarcerated individuals. She talked about using messaging around human dignity and families to bring together these seemingly distinct communities—those affected by mass incarceration and those affected by immigration policies.

These conversations are often around “worthiness,” Walker added, who focused much of her organizing work on communities affected by mass incarceration. “Who is worthy of a second chance?”

Attorney Raha Jorjani offered a concrete illustration of how integrated spaces can promote tangible change. Jorjani is an immigration defense lawyer in the Office of the Alameda County Public Defender, where she provides free legal representation to immigrants in both criminal and immigration courts—the first model of this kind in the nation.

“There’s no end point,” she said. “You can't say, ‘I will be home to your child on this date,’ you can’t even know what city you’ll be in,” she said. “I think that’s a serious public health concern...the health consequences of indefinite detention.”

As a public defender for immigrants, Jorjani offers legal support to immigrants facing both criminal and immigration hearings who would likely otherwise have to defend themselves. In the unique Alameda County model, she can collaborate with regular public defenders to offer an even stronger defense to clients—working directly at the intersection of immigration and incarceration.

Jorjani also offered a spark of hope for activists and organizers working in communities and on the ground. “The work you’re doing outside is entering the courtroom space,” she told them. “The Public Defender's Office after Black Lives Matter started talking about racial justice... making judges and prosecutors extremely uncomfortable. Everything that happens out there is trickling into the courtroom.”

Towards the end of the event, powell led the speakers in a Q&A session to share concluding thoughts. He offered a final consideration of his own: “Peace is more than the absence of war,” he said. “We’re trying to build something affirmative.”