In a span of three months in 2017, three Richards— Reeves, Florida, and Rothstein—published three well-received books on inequality in America. Each work begins at starkly different origin points, but end at remarkably similar conclusions. The consensus policy agenda developed by the three Richards suggests not only the unfinished business of past generations, but also the unique challenges that confront our society today. 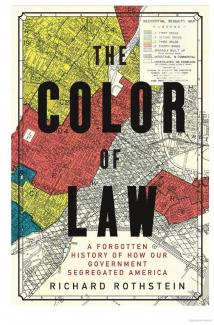 In The Color of Law, Richard Rothstein draws upon the tradition of urban historians in telling a familiar, yet surprising story of government-sponsored residential segregation in the 20th Century. In this story, government mortgage and housing policy opened wealth-building opportunities for millions of white Americans while locking most African Americans in declining and decaying urban ghettos.

Meticulously researched, Rothstein describes the macro-policy decisions that built suburban America and systematically segregated metropolitan regions beyond the Jim Crow south. At the micro-level, Rothstein weaves intimate and painful stories of the families affected by these policies. The result is a bracing and vivid story of racial inequality structured into post-war America. 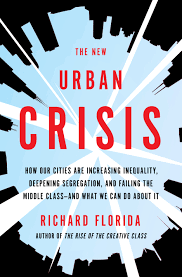 Richard Florida, best known for his evangelism and work on the “Creative Class,” writes a mea culpa of sorts in his book The New Urban Crisis. Beginning roughly where Rothstein’s book ends, Florida opens with a personal vignette of growing up in Newark, New Jersey during the uprisings that were carefully documented in the Kerner Commission Report of 1968. Explaining how “place itself had become the central organizing unit of the new knowledge-based economy,” Florida describes a new, equally troubling pattern. In this iteration, well-educated knowledge workers are returning to the urban core, displacing poor and lower skilled workers to the urban peripheries. Such divides, as he systematically demonstrates, are “causing greater inequality both within cities and metro areas, and between them.” Specifically, he observes an unfolding of “small areas of affluence and concentrated advantage, and much larger areas of poverty and concentrated disadvantage.”

Critically, this pattern is not simply a feature of US residential life in major metropolitan regions. Florida sees the same or similar pattern playing out in different degrees of extremity across the globe. Nearly everywhere, people are moving to cities for opportunity, amenities, and jobs. In Florida’s telling, cities are “the engine of innovation and economic growth.” But the conditions they encounter are heartbreaking. By his account, more than 800 million people worldwide live in “destitute poverty and substandard conditions in slums, barrios, and favelas, and their numbers will continue to grow as the world’s urban population surges.” Florida deploys data and painstakingly developed research to describe these patterns in novel and compelling ways, including the growing concentration of capital in “superstar cities” and emergence of mega-opolises.

Florida’s argument outlines each dimension of a global crisis that we are only now beginning to confront. While attentively focused on questions of race and class, Florida maintains a macro-focus. Policies that exacerbate and perpetuate inequality also tend to reduce economic growth. He points out that metropolitan regions with the highest rates of inequality also have slower rates of overall economic growth, a feature he is able to observe using novel indices of inequality.

Highlighting recent studies by a pair of economists, unwinding restrictive land use policies is not just an equity measure, it is an economic growth precondition. As he notes: “If the housing and land use restrictions that constrain development were eliminated, so that everyone who wanted to work in San Francisco could afford to live there, the city would see a 500 percent increase in jobs."

One of the challenges is that the places with greatest upward mobility now tend to be the most unequal. In one notable anecdote, Florida relates that “San Francisco’s levels of inequality are similar to those of El Salvador and Rwanda, respectively.”

Florida's conclusion is inescapable: “Place and class combine to reinforce and reproduce socioeconomic disadvantage.” Residing in the best communities affords not only access to the best schools, services and jobs, but also the best networks and social capital. 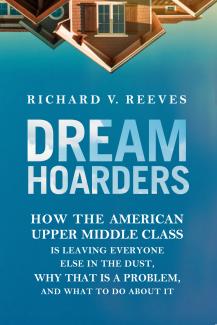 Not coincidentally, this theme is also the heart of Richard Reeves’ book, Dream Hoarders. Contrary to the well-known brandishments of the Occupy Wall Street movement, Reeves asks the reader to readjust their focus from the very top one percent of earners to a broader swath of upper-middle income households, roughly the top 20 percent. In almost every area of life, he argues, they are rigging the system to their advantage. In his view, the key mechanisms of “opportunity hoarding” (a term borrowed from the late Charles Tilly), are “exclusionary zoning; unfair mechanisms influencing college admissions, including legacy preferences; and the informal allocation of internships.” For Reeves, “Each of these tilts the playing field in favor of upper middle-class children.”

Developing an argument similar to Florida's, but with a more narrow lens, Reeves identifies the key barriers to upward mobility and the mechanisms that perpetuate inequality. Focusing on university admissions, family wealth, the tax code, and land use policy, he points out how income and wealth inequality translate into qualitatively distinct educational experiences and childhood environments, describing how upper middle-class children “spend their first quarter century in a greenhouse for human capital growth.” At the same time, he shows how disinvestment in higher education has burdened middle- and lower-income students with greater debt loads, making college more difficult, while it has never been more important.

Like Rothstein and Florida, Richard Reeves reserves special concern for land use policy.  Zoning ordinances, he notes, have become “mechanisms for incorporating class divisions into urban geographies.” Thus, the clustering of tax base capacities, services, and other amenities follow these policy decisions. Place-based sorting reinforces economic segregation. Reeves also draws attention to the unfair use of the tax code to subsidize the upper-middle class while providing a relative pittance to lower-income Americans, and the remarkable fact that elite American universities continue to consider legacy preferences in admissions, while pointing out the United Kingdom phased them out decades ago.

Despite their divergent starting points and analyses, all three books converge on a similar policy agenda anchored by a focus on land use policy and the distorting effects of the tax code. The primary pillar of Florida’s reform agenda focuses on “reforming zoning and building codes” that make it difficult to build affordable housing and invest in needed infrastructure. Similarly, Rothstein proposes a “ban on zoning ordinances that prohibit multifamily housing or that require all single-family homes in a neighborhood to be built on large lots with high minimum requirements for square footage.”

Given the focus of Reeves’ book, it should not come as a surprise that land reform and zoning are the centerpieces of his policy targets. He calls for “curbing exclusionary zoning” and provides practical insight into the on-the-ground battles needed to accomplish this.

Both Rothstein and Reeves take aim at the distorting effects of the mortgage interest deduction, a tax code benefit to the wealthy that effectively functions as a government subsidy to homeowners and exacerbates segregation. Reeves calls the use of "the tax system to help richer people buy bigger houses near the best schools.”

It is telling that three major books on inequality focus their attention on the issue of place and space. Moreover, all three scholars target exclusionary and restrictive zoning as a key cause and impediment to creating a fairer and more inclusive society. This is clearly a policy agenda we must heed.

This piece was published as part of the Haas Institute Spring 2018 news magazine.