Book Review: The Lies That Bind 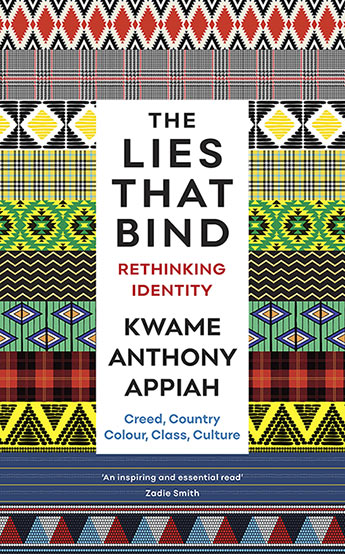 Just as a spate of books on economic inequality erupted in the first half of this decade, culminating in Thomas Piketty’s dense, but readable blockbuster tome, Capital in the Twenty-First Century, there has been a furious burst of scholarship pitched at broad audiences on the questions of identity and nationalism. Notable among them is Kwame Anthony Appiah’s compelling entry, The Lies that Bind: Rethinking Identity.

Organized into chapters heading each of the expressions of identity he investigates—nationality, race, religion, class, and culture—Appiah systematically debunks the essentialist presumptions that many people hold about the nature of these identities. Although he forthrightly acknowledges that “clannishness is a basic feature of our human psychology,” Appiah takes pains to shows how each of these identities is contested, fluid, and more multifaceted than is generally understood. As he puts it early on, “just as there’s usually contest or conflict about the boundaries of the group, about who’s in and who’s out, there’s almost always disagreement about what normative significance an identity has.”

Appiah is a professor of philosophy at New York University, but he brings a worldly, rather than removed, perspective to the issues he tackles. A man that embodies the complexities he seeks to elicit, with a diverse racial, religious, national, and cultural background, Appiah’s personal experiences and insights are the book’s greatest strength. His own peripatetic and richly complicated family history provides some of the most poignant and powerful illustrations of the ideas in the book. Appiah’s father’s Ghanian and Asante heritage and his mother’s English heritage are remarked upon repeatedly, as are the many other interesting family characters that stretch back several generations, including in the senior levels of the British government.

Appiah’s book is a compelling read, primarily because it is laced with fascinating anecdotes and memorable stories. Among them are the story of Amo Afer and the origin story of Singapore. In 1707, an African boy no older than five years old was captured or purchased from the southern coast of Ghana aboard a ship belonging to the Dutch West India Company, and transported ultimately to what is now northern Germany, where he was “gifted” to a local Duke. Remarkably, the young boy was tutored, baptized, and educated like an aristocrat. The Duke’s librarian–who presumably tutored the boy—was Gottfried Liebniz, the co-creator of calculus, and one of the most accomplished mathematicians and inventors in European history.

The boy was given the name Anton Wilhelm, but ultimately began using his Nzemo name, “Amo,” eventually referring to himself as “Anton Wilhelm Amo Afer,” which was the Latin word for African. Appiah describes this education as a “famous Enlightenment experiment,” aiming to “explore whether an African could absorb and contribute to modern scholarship.” The result was, by Appiah’s telling and based upon the best known evidence, “accounted a success”: Amo studied law at a leading university, earned a Master’s Degree for his legal thesis on the European law of slavery, and eventually became the first Black African to earn a European doctoral degree in philosophy. In addition, he became knowledgeable in medicine and astronomy, learned Dutch, French, Latin, Greek, Hebrew, and possibly English, as well as German, before going on to teach at the university level, and author notable books that earned him “eminent admirers.” I won’t spoil Amo’s ultimate fate, but his education and accomplishments tell us as much about race in the eighteenth century as it does today.

Although I knew of Lee Kuan Yew as the leader who built Singapore into a thriving city-state, I was unaware of the explicit role that ethnic diversity played in its creation. Appiah recounts the way in which Yew and the other founders explicitly constructed a multi-ethnic society as a response to the communal violence of 1964. To prevent the emergence of a demagogue and to secure the benefits of diversity, the city not only prohibited many kinds of hate speech, but created a kind of institutional multiculturalism. In particular, the city founders created a system that accommodated each of the four major ethnic groups, without allowing any of them to predominate. One way they did this was to instruct every student in two languages, and ensure that the dominant group’s language was not the official language of the state. They also explicitly and carefully integrated public housing and education. As Appiah puts it, Lee Kuan Yew “insisted on a multiracial, multireligious, and multicultural model” for the new nation.

A brilliant polymath, Appiah relates and connects ideas and stories I was very familiar with and those I had never heard of. I found Appiah’s chapter on religion to be the most erudite and fascinating. He is as capable describing the nuances of Christianity and ancient Jewish culture as he is on the cross-fertilization of ancient knowledge and Islam or the origins of Hinduism. Religion would seem to be an identity–since it is based on creed–most likely to have an “essential” component. But even here, Appiah calls this “source-code fallacy,” which he defines as “the idea that the true nature of religion lies with its deepest, most foundational texts, abstracted away from the real-world range of its actual adherents; that access to these codes can reveal that religion’s essence.” As a brilliant thought experiment, he asks the reader to imagine what kinds of cultures might emerge around the New Testament or other foundational religious texts, but in contexts in which they are completely disconnected from the practices and cultures that arose around those texts. In other words, if we were to airdrop a Bible or a Koran into a remote, uncontacted community of people, or even an alien world, it would have scarcely anything in common with, say, the practices or governance of the Catholic Church.

As compelling as the book is, after finishing the third chapter (of seven), I found myself wondering what, exactly, he was driving at. His critique of essentialism was persuasive, but I was already on board for that point. His various arguments seemed to add up to less the sum of their parts. Had I not read book reviews before starting in, I would have had only a vague idea how his salient points were connected together. Most of the book reads as a critique of various conceptions of identity without laying out what his affirmative position was or what his argument was building toward.

Unlike other scholarly books on identity, like Anthony Marx’ landmark book Making Race, Making State or any of Charles Tilly’s compendiums, Appiah does not offer a comprehensive theory of identity formation or development, but he does provide the why in each case he surveys. For that reason, his book does not suffer for lack of an explanatory account. In fact, by focusing on the most practical questions of how we build more inclusive societies, I could see how the questions that tend to concern most academics were not necessarily critical to resolve.

As a philosopher, Appiah has a refined and compelling vision of a life well lived. He has grappled with, and provides excellent answers to, many of the most difficult questions of human existence, such as: What is a good life? How does one live a good life? And how does one measure a good life? But, ironically, he has fewer answers to the central issues of the book, such as: How do we contest the weaponization of identity? How do we protect marginalized groups from a fearful majority? What are the mechanisms that rendered the social constructions of identity structural, and cause intergroup inequality? And what are the interventions we should consider to reduce it?

He reminds us that “as a rule, people do not live in monocultures, monoreligious, monolingual nation-states, and they never have,” but that reality has notstopped demagogues from trying to make their nations into one, no matter how horrifying the means. As such, Appiah does not offer a solution to the problem of how identity is being weaponized.

Appiah is right to ask us to reject essentialism, but fails to provide a clear account of the social reality of identities that we can hardly, as he also acknowledges, abandon willy-nilly. Appiah has done the hard work of critique, but has not begun the even harder project of reconstruction.