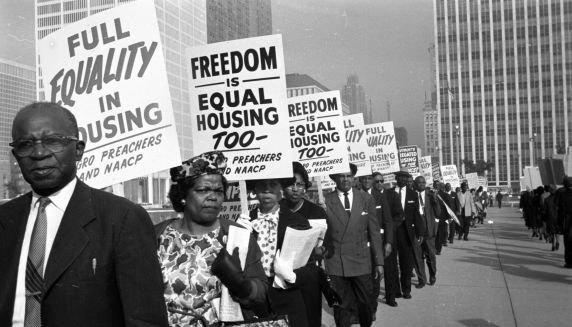 This week marks the 50th anniversary of the passage of the Fair Housing Act. The final major legislative accomplishment of the Civil Rights Movement, this act was preceded by the Civil Rights Act of 1964 and the Voting Rights Act of 1965. President Lyndon B. Johnson pushed for an “open housing” law several years before, but severe losses in the 1966 congressional mid-terms, as well as a southern filibuster, prevented that from happening. Although the Kerner Commission Report of February 29, 1968 made a federal open housing law one of its chief recommendations, such a bill seemed to be going nowhere until the assassination of the Martin Luther King Jr. on April 4. With fear of further uprisings in the streets, legislators moved swiftly, and the Fair Housing Act was on President Johnson’s desk a week later.

Southern Senators, who held key committee positions and controlled crucial levers of power in Congress, had repeatedly used their power to thwart any advancement of civil rights and racial equity. That the Civil Rights and Voting Rights Acts were able to be enacted in that Congressional reality are textbook examples of the prowess and persuasive power of Lyndon Johnson as President.

Some of the grounds expressed for opposition to the Civil Rights Act of 1964 was that it reached beyond “state action,” and prohibited private discrimination, such as in employment or ‘public accommodations’ in theaters, transportation, and restaurants. In fact, it was precisely on this ground that the Supreme Court overturned the earlier Civil Rights Act of 1875, which had also prohibited racial discrimination in public accommodations. In that infamous 1883 decision, the Supreme Court held that the statute went beyond Congressional authority under the 13th and 14th Amendments to the Constitution, which, it claimed, was limited to redressing ‘state action.’

Concerns over fair housing were even greater in that regard. When businesses hold themselves out to the public or hire from the public, there are public reasons to prohibit discrimination. But it was believed by many legislators that when private individuals sell or rent property, they should be able to sell—or not sell—to whomever they wished, and that the government reaches too far when regulating such activity.  In 2011, Senator Rand Paul created a stir when he re-articulated this concern. He seemed to suggest that he would have opposed the Civil Rights Act of 1964, because, in his view, the “intent of the legislation… was to stop discrimination in the public sphere and halt the abhorrent practice of segregation and Jim Crow laws,” and not, by extension, to regulate private activity. If true, then he would certainly oppose the Fair Housing Act by extension, which legislates even more deeply into private market concerns.

Although the original bill contained a number of loopholes, the Fair Housing Act in its original iteration went further than just to prohibit discrimination in the sale, rental, leasing or conditions of sale of housing. It also required that the government promote integration proactively with a famous, but unusual phrase. As the experience of school desegregation in the aftermath of Brown v. Board of Education had taught, it was not enough to simply allow school authorities, who had discriminated for decades, to simply assign students on a non-racial basis or allow parents to enroll according to their own choice. Such plans would do little more than perpetuate the systematic segregation that existed in southern schools. Thus, the Brown mandate, carried through subsequent decisions, such as Green v. County School Board of New Kent County, required authorities to take affirmative steps to desegregate “root and branch.” This meant proactive measures to promote desegregation.

The same was true of housing. After decades of federal, state and local policies that had formed and systematically promoted racial residential segregation, simply prohibiting discrimination would hardly transform those patterns. Thus, although the Fair Housing Act’s main provision was an individualistic tort solution to discrimination, it went further, and called on the HUD and other federal agencies to “administer the programs and activities relating to housing and urban development in a manner affirmatively furthering” fair housing.

Unfortunately, Congress did not fully articulate the meaning of this phrase nor specify actions relating to this duty. It took more than four decades, but in 2010, under the Obama administration, the Department of Housing and Urban Development (HUD) began drafting an administrative rule that would clarify and operationalize this responsibility. The rule was finally issued in 2015, and has been used by a number of cities to begin to attack entrenched segregation. Earlier this year, however, Ben Carson and HUD announced that they would delay implementation of the rule to new jurisdictions at least until 2020, and hinted that they might try to undo it.

Although according to some measures, such as the dissimilarity index, racial segregation is not nearly as severe as it was in 1970, just a few years after the enactment of the Fair Housing Act, it remains persistent and deeply prevalent today. Well over half of white or black Americans would have to move to create a truly integrated society. According to alternative measures, such as the exposure index, racial segregation is roughly as bad today as it was in 1940, toward the height of Jim Crow. In truth, the basic racial patterns in most major metropolitan areas are shockingly similar today, despite demographic change, as they were five decades ago (as the maps in this presentation show). The United States has a long way to go to achieving the vision of fair housing that was the hope of the Kerner Commission and the Fair Housing Act. It remains a moral imperative that we do so.

Housing segregation is not and has never been just about separating people from each other. It is about segregating people from opportunity and resources that enable upward mobility. There are some well-meaning people today that believe, just as the Plessy Court did, that separate could be equal, and that instead of integration, we should seriously try to equalize resources and investments in racially isolated areas. In fact, some black parents with children in segregated schools during Jim Crow held this view. In the Moton High School in Virginia—one of the five cases eventually consolidated into the Brown decision—the NAACP Legal Defense Fund attorneys met with parents who simply wanted public authorities to provide equal resources to their school, but did not necessarily aim their ire at segregation itself. Thurgood Marshall and his team of lawyers warned that they would only take up the case if the parents were willing to attack segregation, not simply ask for equalization. Today, similar arguments can be heard in various quarters, that the problem isn’t segregation per se, but inequality between neighborhoods or environments.

These arguments ignore the axiom that the unanimous Supreme Court offered in Brown,” that segregation is “inherently unequal.” As the Court in that case pointed out, the problem of segregation could not be solved by simply equalizing resources. If that were true, the Court could have simply upheld Plessy v. Ferguson, and demanded that school districts actually undertake the real work of investing in facilities and teachers to the same degree in black and white schools. But the Court went further, and explained that equalizing tangible resources was not enough—segregation had intangible effects that were just as harmful. Social science research bears this out. Even where public educational opportunities are well financed, social networks, social capital, and private resources that supplement and enhance these opportunities remain unequal. We will never solve or address the problem of racial inequality in our society as long as we remain segregated. After all, if resources, tangible and intangible, were equal, there would be no segregation to begin with.