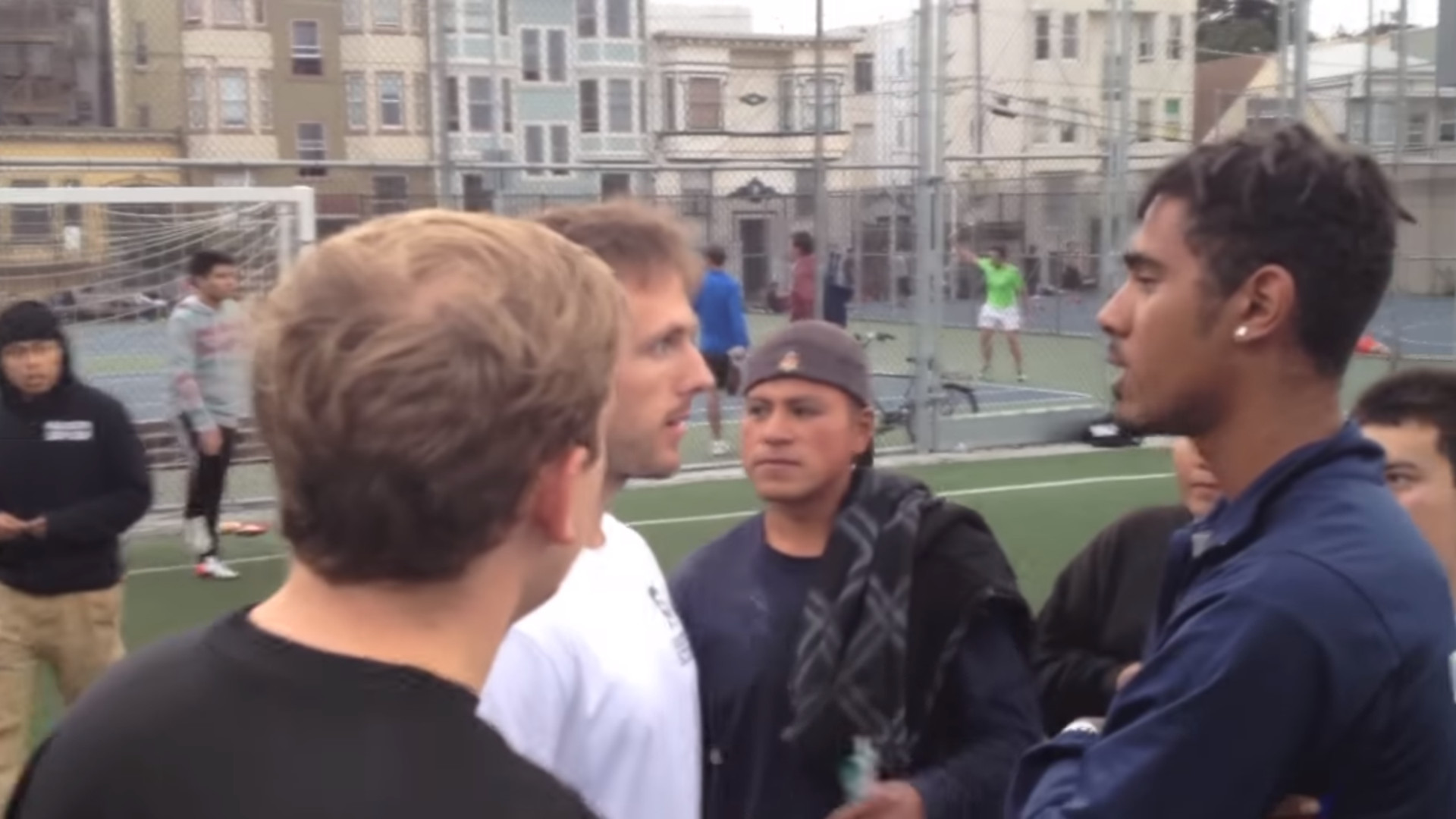 An image grab from the Mission Playground Dispute video that shows newcomers to the San Francisco neighborhood arguing with long-time residents over rights to reserve the field.

In a recent editorial, the Economist magazine weighs in on the gentrification debate from the position that when it comes to historically marginalized populations experiencing a transformation of their neighborhoods, the truly underrepresented are actually beneficiaries of gentrification. The piece puts forth several arguments in favor of gentrification that may speciously read as a measured, dispassionate analysis; however, a more careful examination reveals that the Economist overlooks finer points and undervalues the cost burden on certain affected groups to arrive at a conclusion that doesn’t upset their worldview.

The main argument offered is that most analyses do not demonstrate that gentrification results in displacement. The article cites studies by Lance Freeman and Frank Braconi that conclude–by using low credit scores and no mortgages as indicators of poverty–that poor residents generally do not move out as wealthier newcomers move in.

But these findings are based on faulty assumptions. Not only has extensive research by the UC Berkeley Urban Displacement Project found that gentrification leads to exclusionary displacement, such an aggregated approach to research that the Economist cites does not allow for differences by race to be taken into account.

Oakland-based policy institute Urban Habitat in a policy brief titled “Race, Inequality, and Re-Segregation in the Bay Area” reveals that as the rapid annual population influx to the region has persisted (90,000 new arrivals in 2014-2015 alone), all but two Bay Area counties have experienced a decrease in Black residents while levels of poverty have increased in Black and Latinx communities.

Set aside the Economist article bemoaning the reliance on anecdotal evidence in the gentrification debate only to then advance the anecdote of one Black man who sold his house for a profit in his gentrifying Washington, DC neighborhood. The piece uses this example to support its claim that due to low property prices resulting from underinvestment, wealthy newcomers can move into areas without displacing residents who–especially homeowners–will benefit from the improved amenities that accompany their new neighbors. This point neglects the high number of renters on the side of both long-time residents and newcomers, and how that market works. Whether rising property values help or harm is fundamentally tied to whether one owns or rents. Since Black households were targeted for subprime mortgages at 2.4 times the rate of white households, the foreclosure crisis disproportionately impacted Black people, forecasted to reduce Black wealth by 40 percent by the year 2031 and forcing many out of homeownership and into the rental market. As new, wealthy arrivals drive up rental demand, lower-income renters don’t get the luxury of rising home values that owners do–they get forced out by higher rents.

Then there’s the claim that “gentrification steers cash into deprived neighborhoods and brings people into depopulated areas through market forces.” But gentrification is far from a purely market-based phenomenon. Because of its acrimonious disposition to black and brown people, the government inflicted a series of contemptuous policies on these populations and their neighborhoods, intervening in the market to create favorable conditions for whites and destroy opportunity for all others.

Redlining, urban renewal, racial zoning practices, and highway placement are all instances of market interference that purposely depressed real estate markets in non-white neighborhoods. This history is the reason subprime predation was profitable. The simultaneous government investment in white communities created the conditions today to, as the Economist sees it, let the invisible hand walk wealthier newcomers right into low-cost areas.

The Economist calls white supremacy an exaggeration of the force of gentrification and reactionary labeling. This opinion is likely based on a narrow definition of white supremacy as white hoods and blatant racial animosity. A more accurate definition of this term is the creation and reinforcement of systems that advantage white people over others based on the explicit or implicit assumption that whites are more deserving of societal spoils and the explicit or implicit veneration of white practices, customs, and norms over those of non-whites.

Notice how the Economist uncritically lauds the fact that investment tends to follow gentrifiers without asking why the displaced population wasn’t worthy of public attention and resources before the arrival of the wealthier newcomers.

The article is quick to warn that opposing gentrification risks forfeiting resulting racial integration. What the Economist misses is that a cursory glance at a neighborhood revealing the presence of white faces and non-white faces is not integration if those white faces don’t see it as necessary to weave themselves into the existing community and understand the maintenance of distance as their right.

Take for instance the New School’s analysis finding that in New York’s most gentrified neighborhoods the schools are still segregated. Living among people of color but viewing the sharing of resources with them as diluting to your privileges should be no one’s definition of integration. In the debate on gentrification’s impacts, the Economist empathizes with the gentrifiers and undervalues the costs and burdens placed on communities long neglected. The Economist has no qualms imposing the accompanying tastes of newcomers, referring to them as “progress”–connoting them as more cultured, refined, an improvement over what already existed. No concern for the bitterness of the racially discriminatory housing policy of the past. No regard for the acridness of culture lost in Oakland or Black history plowed over in Harlem. Some people are progress, some are open for trampling. The Economist’s conclusions sound an awful lot like the veneration of certain practices, customs, and norms over others. If only there was an appropriate term for that.