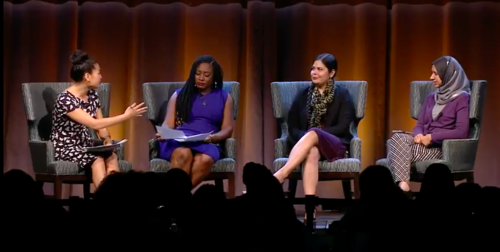 Speaking on the first night of the 2017 Othering and Belonging Conference, and on the hundredth day of the Trump presidency, in a moment where “it feels like we might all fall apart," keynote speaker Jeff Chang told more than 1,100 conference attendees that it is not too late to reimagine a society grounded in belonging. And artists, he said, “have the potential to be stewards of validating the righteous humanity of marginalized people.”

Chang, Executive Director of the Institute for Diversity in the Arts at Stanford University, was just one of more than two dozen distinguished keynote speakers at the conference, all of whom sought to provide clarity and context on the strained moment the world finds itself in today, or, like Chang, offer a provocative reimagining of what could come next.

In an era when toxic nationalism, xenophobia, and racism are on the rise, and when human rights and democratic values are under attack, the Haas Institute crafted a space where diverse stakeholders could gather to advance ideas centered on inclusion, justice, and equity. Designed as a public forum to strategize about civic engagement and grassroots advocacy, the conference, held April 30-May 2, 2017 in Oakland, served as both an inspiration and active driver for bold action towards a society where all groups share access to resources and opportunity.

Chang, who said we are currently facing “the struggle for the soul of America,” concluded that it is the job of artists, and of changemakers more broadly, to inspire people and to “manifest the idea of a nation that is yet to be.”

Attendees heard not only from artists who are doing just that—notably photographer LaToya Ruby Frazier and Moonlight playwright Tarell Alvin McCraney, both of whom discussed the role of the artist in elucidating and expanding popular notions of belonging—but also scholars, policymakers, activists, and others, each offering diverse expertise to help guide the fight for belonging.

Reiterating Chang’s conclusion, Black Lives Matter co-founder Alicia Garza noted during one panel that her work as an organizer is to “cultivate the movement that I want, fully understanding it is not yet here.”

One keyote speaker, Stanford University sociologist Doug McAdam, emphasized that it is important not only to look forward, but also backwards in order to understand that the divisions we see today—especially in the rhetoric used to demonize people of color and other minority groups—are nothing new, ”just the most extreme version of what we've seen recently.”

McAdam was highlighting a truth underscored by a number of other speakers at the conference: that the divisions President Trump embodies are a continuation of America’s legacy of exclusion, and, secondarily, that the fight opposing the president’s policies are just one part of a larger historical fight for justice. Renowned changemakers like former Greenpeace head Kumi Naidoo, scholar Saskia Sassen, and Color of Change director Rashad Robinson all echoed many of these sentiments from varying vantage points during their keynote addresses.

Robinson, who oversees the nation’s largest online racial justice organization, emphasized that just having “presence” in the fight is not enough. “Presence is important,” he said, “but it can't replace actual power. Power is the ability to change the rules.”Robinson went on to argue that power should not be directed simply at tackling discrete issues, but at changing the system that creates them as well.

It is the job of artists, and of changemakers more broadly, to inspire people and to “manifest the idea of a nation that is yet to be.”

“Oftentimes we focus simply on the issues, not on the structures that got us here,” he said, noting that the opposition has spent years strategically stripping away Americans of color’s access to the vote—because it understands that “they cannot win if we can vote.” Larger structures must be shifted in tandem with addressing smaller, more urgent challenges for lasting victory.

While many of the speakers centered their discussions on history, politics, culture, or organizing strategy, Haas Institute Director john a. powell focused his talk firmly on the ontological, or notion of self.

In his speech on “practicing belonging in a period of deep anxiety,” powell provided a closer critique of exclusion and division in US society through the entrypoint of a very simple American phrase: We the People.

Who is “We,” he asked, and who is considered “People”? For too long, that “we” has only included a small few, excluding groups like Black Americans, immigrants, members of the LGBTQ community, and others. powell argued that stories about who “we” are are critical to reimagining a more inclusive whole. For too long, he said, “we” stories have been exclusionary, highlighting only the triumphs and suffering of a small group, with everyone else lumped into the secondary role of “Other.”

Stories, he concluded, are critical to our shared survival as they allow us to suffer together. To hear others’ suffering can serve to de-Otherize—and create a space of belonging. “Compassion means to suffer with others,” powell said. “We tell a story and we suffer together.”

The conference concluded with an electric speech from scholar and journalist Melissa Harris-Perry, who reminded conference-goers that those who are Othered in society often hold the most valuable and honest truths—and their insights can make us stronger. “The Others know that Trump voters are not uniquely deplorable,” she said. “They are reflecting the race and gender values enforced in our culture and history.”