WE TOO BELONG RESOURCE GUIDE 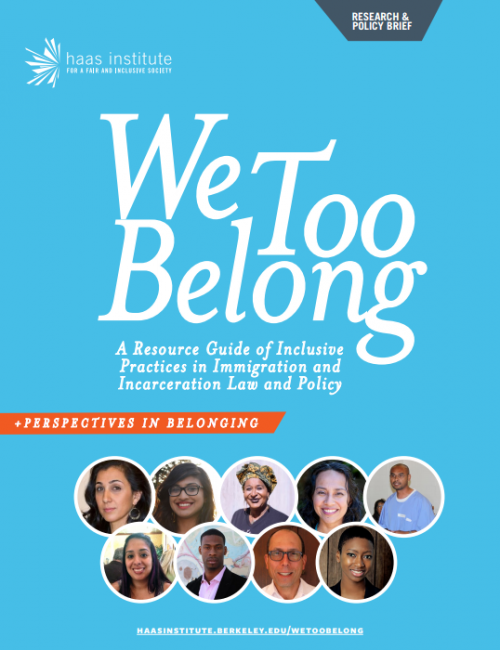 The Haas Institute for a Fair and Inclusive Society announces the release of a major new publication, entitled We Too Belong: Resource Guide of Inclusive Practices in Immigration and Incarceration Law & Policy. The resource guide highlights inclusive policies and practices, supplemented by case studies centered at the intersection of immigration and incarceration in the United States.  These systems are sometimes referred to as the “Double Is.”

“The most marginalized populations in the history of our society were those that were denied public voice or access to private space. Historically, women and slaves experienced this form of marginality. They could not vote, serve on juries, nor run for office, and they were also denied a private space to retreat to, free from surveillance or regulation. Today, immigrants, the incarcerated and the formerly incarcerated, and to a large extent the disabled, most visibly inhabit this marginalized social and spatial location in American society,” opened the new resource guide, effectively framing both the problems faced by individuals and the systems that impact their lives.

Developed by a team of seven co-authors, We Too Belong represents nearly three years of research into best practices and policies related to immigration and incarceration in the US. Lead author and Haas Institute Assistant Director Stephen Menendian notes that “There are dozens of cities across this country making real progress towards a more inclusive society, but too often our attention is focused on places where people are struggling. We need to shine a light on what’s working, and expand our sense of what’s possible. This report does that.”

Drawing on the experiences of states and localities attempting to integrate immigrants and the formerly incarcerated into their social and economic fabric, We Too Belong offers a small window into the lives of people affected by these policies. The criminal justice system and immigration law serve to separate individuals from the rest of US society through physical exclusion—including prisons and detention centers. Procedurally, immigration enforcement looks and acts like law enforcement—a phenomenon known as “crimmigration”—while the criminal justice system has locked up 400 people for every 100,000 in the population with the disabled and communities of color disproportionately affected by these systems.

The 100-page Resource Guide does not only give an in-depth menu of policies, but also humanizes the “Double Is” by featuring the stories of people who are the most affected by them. These nine perspectives from undocumented, incarcerated, and formerly-incarcerated individuals are featured alongside advocates and scholars who have spent their careers exploring the ways that these structures are impeding a healthy, inclusive society that recognizes the inherent dignity and humanity of all people.

Berkeley legal scholar Jonathan Simon, author of Mass Incarceration on Trial, praised the report, saying, “I found this a tremendous contribution to the effort to rethink and repair the tremendous damage done by mass deportation and mass incarceration.  I know of no other comparable document that covers this intersection with such detail and also with such a consistent vision of promoting belonging and respect for human dignity.”

The We Too Belong publication was premiered to a group of about 75 people gathered last month in Berkeley, California at an event which aimed to build power at this intersection. A summary of the event can be found here.

We Too Belong also includes personal perspectives offered by the nine individuals. We encourage you to share the graphics and the stories.

PUBLIC LAUNCH OF WE TOO BELONG RESOURCE GUIDE 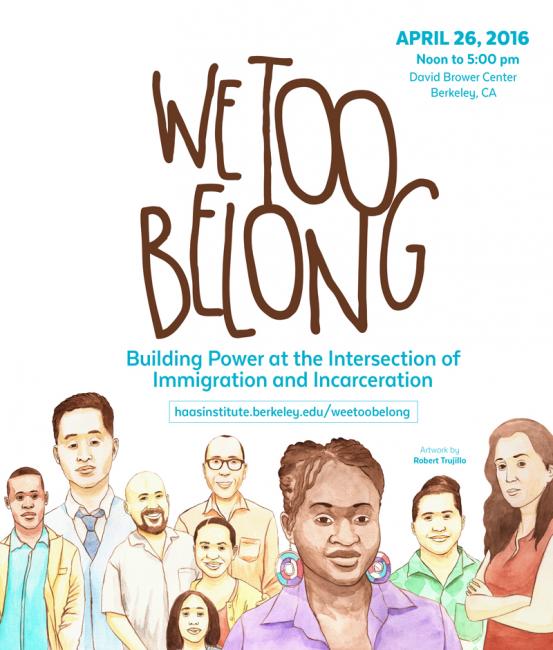 For immigrants and the formerly incarcerated, the very act of living is often presumed criminal.  Unable to share their stories openly for fear of being “discovered,” these individuals constantly confront the burdens of exclusion. Immigration law and criminal law have trapped millions of individuals in a space marked by an inflexible and "lesser" status that prohibits the members of these groups from engaging in civic life or sharing in the rights and benefits generally made available through public and private sources.

On April 26, 2016, the Haas Institute debuted our new Resource Guide, We Too Belong: A Guide of Inclusive Practices in Immigration and Incarceration Law and Policy, at a public event in Berkeley, California to surface opportunities for transformative change as we explore the exclusion of these groups as well as cutting-edge inclusive solutions.

The event includes case studies from advocates, scholars, artists, and community members working at the intersection of immigration and criminal justice and will join in dialogue and opportunities for power-building as we align ourselves in our work of a more inclusive society for all.  The event goals include:  Putting the best practices summarized in our memo into the hands of advocates, organizers, electeds, and thought leaders who can push for these policies to be implemented; Illuminate the intersection of Immigration and Incarceration ("Double Is") by giving advocates and organizers concrete examples of how to work at that intersection.

Connect with us through social media: #wetoobelong.

This work is made possible through the generous support of the Ford Foundation.