Trumpism and its Discontents

Back to
Trumpism and its Discontents

The following is a chapter from Trumpism and its Discontents. Click to download a PDF of the book here. 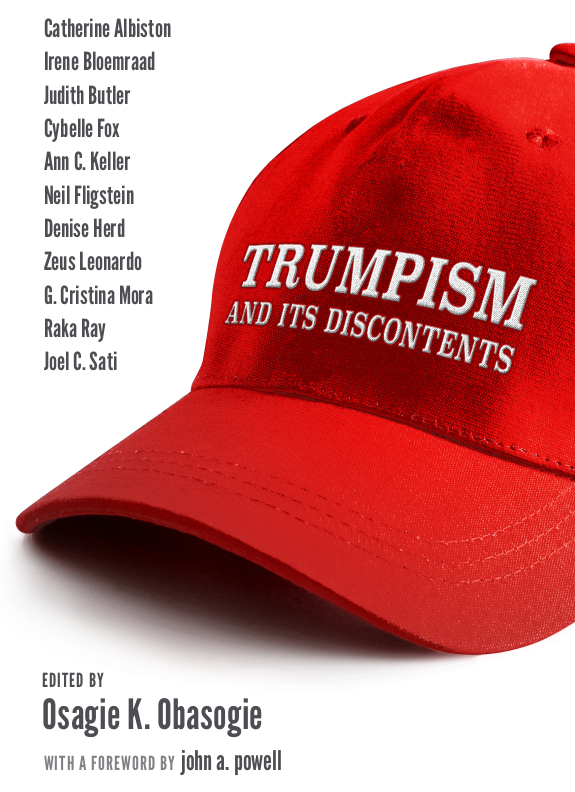 Like the Apollo 11 moon landing in 1969 or the Challenger space shuttle that tragically exploded 20 years later, many of us remember exactly where we were the moment we learned the outcome of the 2016 election. I have a general rule of watching election results and sporting events that I care about alone; unexpected outcomes – whether they are favorable or not – can sometimes be too much to bear in the midst of company. I spent that November afternoon and early evening on my couch in front of the television, watching the likelihood of Hillary Clinton’s victory start well above 90% and slowly tick down . . . tick . . . tick  . . . tick . . . until the newscaster finally called it: Donald J. Trump would be the 45th President of the United States.

I sat there staring at the screen with a glass of bourbon in my hand. Earlier in the day, I ran into a colleague at work in the hallway. We exchanged banter about the election, and I voiced some skepticism at his confidence in a victory for Democrats. He said, “There’s no way Hillary loses this, right?” I just shrugged. I could tell from the look on his face that he thought I was being ridiculous. I knew what the numbers on FiveThirtyEight and the New York Times Presidential forecast said. But I also know America. And I had a gut feeling that Trumpism and all of its vulgarities – the slander of immigrants, the sexual assault allegations, the birtherism – appealed to more people than many realized.

As I watched the television pundits attempt to explain what they believed to be an inexplicable outcome with buzzwords such as ‘economic anxiety’ and ‘suburban voters,’ my eyes just glazed over. This really happened. I wasn’t surprised as much as I was disappointed that the cynicism that I have at times for American politics had been validated. After eight years with a Black President, the Empire had struck back. And while it is clear that the Trump campaign welcomed assistance from Russia and perhaps other foreign countries, one thing is also certain: this backlash was as American as apple pie.

Trumpism as a theory or practice of politics is difficult to pin down. Unlike most political standpoints such as progressivism, conservatism, or liberalism, Trumpism has no real principles in the traditional sense. Republican pundit Ron Christie has characterized Trumpism as “what the president believes on any particular moment on any particular day about any particular subject.”1 Former federal judge Mayranne Trump Barry, the President’s older sister, confirmed this sentiment when her niece secretly recorded her saying, “All he wants to do is appeal to his base. He has no principles. None. None.”2

While Trump’s approach to politics and governing is demonstrably self-serving and transactional, one can discern patterns and loosely linked ideologies that come to resemble something that begins to look like a worldview. This volume is an initial attempt to bring greater clarity to the tendencies and impulses that coalesce to approximate what Trumpism might be if we take it as a serious political project.

The authors of the essays that comprise this volume share an affiliation with the University of California, Berkeley. As such, it is a demonstrably “Berkeley” project: progressive in its vision, a richness in theory that is only matched by its seriousness in method, and rigorous to the bone. The volume emerged out of a working group on Trumpism at the Othering and Belonging Institute on the Berkeley campus that came together shortly after the 2016 election and included Kathryn Abrams, Denise Herd, Taeku Lee, Osagie Obasogie, Angela Onwuachi-Willig, Joel Sati, and Leti Volpp. The project grew to include a partnership with the Institute of Governmental Studies, also on the Berkeley campus, which has served as the volume’s publisher and has been wonderfully supported by Christine Trost and Kelly Jones. The authors of these essays hail from disciplines as varied as law, education, public health, and sociology and examine aspects of Trumpism that include its reformulation of the liberal order; transformations in race speech; shifts in the politics of gender, undocumented status, and immigration; fusing of antistate and antiscience approaches in regulatory policy; demographic shifts and the politics of resentment, and many other topics.

This collection is far from the first effort at understanding the politics and political imagination of the Trump presidency. But these essays offer a fresh look at Trumpism by closely examining its sensibilities as a particular political ordering inasmuch as its apparent incoherence and self-service are reshaping the country and world in ways that need thoughtful attention. The contributors to this volume offer this engagement, and it is our hope that the essays can provide a critical lens from which to understand the political world that has emerged around us.