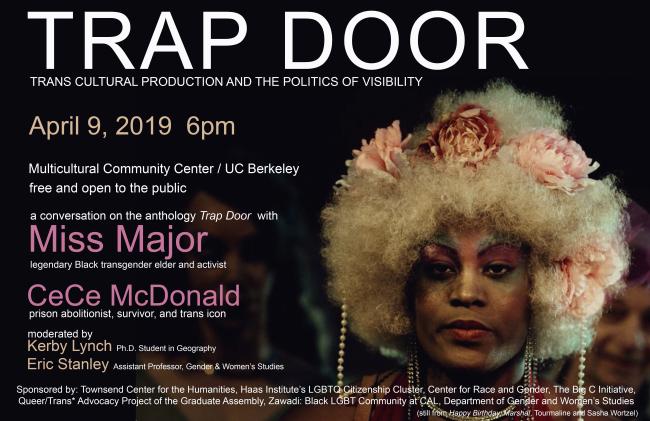 TRAP DOOR
with Miss Major & CeCe McDonald
Join us for a conversation on the anthology "Trap Door: Trans Cultural Production and the Politics of Visibility" (MIT 2017)

Featuring:
Miss Major: A veteran of the infamous Stonewall Riots, former sex worker, and survivor of Attica State Prison, transgender elder and activist Miss Major has fought for over 40 years to create visibility and equity for trans women of color. Miss Major has built a global legacy of activism that is rooted in her own experiences, and will continue to pave the way for transgender women of color, particularly those who have survived incarceration and police brutality.

CeCe McDonald: is a transgender activist and revered icon of the LGBTQ community. She captured international recognition in 2011 after surviving a white supremacist and transphobic attack, later receiving a second-degree manslaughter conviction and serving 19 months in prison simply for defending herself.

Free and open to the public.
For accessibility information see access.berkeley.edu
Image