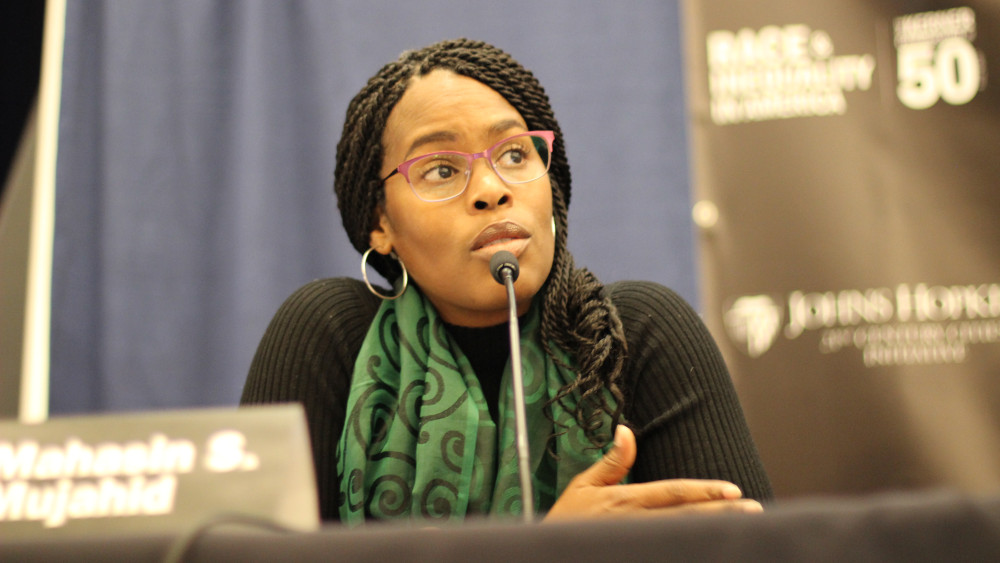 Haas Institute scholar Mahasin Mujahid considers rural communities the “neglected frontier” of the public health field. Together with an interdisciplinary team of doctors, social epidemiologists, anthropologists, and psychologists, Mujahid will play a leading role in a major new study called Risk Underlying Rural Areas Longitudinal (RURAL) that seeks to understand how social, economic, and biological factors intersect to create barriers to health equity. RURAL will outline the economic and social structures that create health disparities in rural communities and suggest how to best improve those structures in order to improve the health of the people living within them.

In the aftermath of the 2016 presidential election, politicians and journalists alike decried a crisis in the American hinterland. And, with that cry, came a moment of national reckoning and an attempt to understand the economic and cultural reality of rural America. Journalists painted portraits of closing factories and forlorn workers while Silicon Valley businessmen discussed how to usher these forgotten communities into a new economy. Indeed, the plight of rural America became synonymous with the unintended consequences of neoliberal policy and federal disinvestment.

The end of economic opportunity in rural communities heralded the arrival of a host of collateral consequences, the most sinister of which was a widespread loss of accessible health care. As long-term residents moved away from rural areas—leaving a void of patients and medical practitioners in rural communities—small town hospitals closed due to financial constraints, forcing residents to commute long distances for adequate health care. Expectant mothers in rural communities would have to drive hundreds of miles to reach hospitals with maternity wards; small health needs could snowball into life threatening medical emergencies from a lack of medical care options; even a broken arm might require a full logistical strategy in order to receive treatment.

However, the loss of access to quality medical care is only one of the complex factors underscoring the current health crisis in rural America. In general, rural communities already experience higher rates of chronic disease, disability, and premature death. A 2017 study by the North Carolina Rural Health Research Program found that residents of rural America tended to be sicker, older, and poorer than their urban and suburban counterparts. And, while it’s easy to blame the lack of medical care for the health disparities between rural and urban communities, the ways that economic and social breakdown can affect community health is much more complicated. Your scientific intuition may say, “Surely, the stress of economic and cultural breakdown impacts health outcomes.” But, generally speaking, there is no clear understanding of how these social and economic factors impact the health of collective populations.

“Many times these communities are thriving despite their high poverty. They can be communities with strong social support networks. This resilience needs to be recognized and celebrated.” - Mahasin Mujahid

Fortunately, a subsection of public health professionals place understanding the social determinants of health at the center of their research. They operate in the field of social epidemiology, a discipline that serves to delineate how economic and social factors operate on intersecting levels to impact health.

And, while public health experts have sidelined social epidemiology for most of its existence, often placing it secondary to behavioral and biological aspects to health, the field has recently gained some solid and central footing in the public health discipline. This past June, the National Heart, Lung, and Blood Institute—a branch of the National Institutes of Health—announced a six-year study on rural health outcomes, that would probe social factors to health disparities along with biological ones.

“Obviously, health involves biology. But health is also impacted by a variety of other factors. Factors like family dynamics, neighborhood and community structure, hospital systems, health infrastructure, and social and economic policies,” explained Mujahid, a UC Berkeley professor of Public Health. “How do social factors coalesce to impact an individual’s health? How do they get embodied in somebody’s biology? These are the type of question I’m interested in answering.”

Today, public health scholars like Mujahid consider rural communities the “neglected frontier” of the public health field. And perhaps the opening of this frontier is well-timed. The overwhelming focus on the rural-urban divide since the 2016 election has spurred national health organizations to invest in research that probes the health disparities between rural and urban communities.

And RURAL is perhaps the most aggressive attempt to fill this gap in public health research and is a remarkable move to diversify the National Institutes of Health’s research portfolio. The $21.4 million study is the first major study to examine the health of the most rural communities in the Mississippi Delta and Appalachia, highlighting 10 never-before studied counties in Kentucky, Alabama, Mississippi, and Louisiana.

It also marks a moment of change in the discipline of public health. By focusing on understanding the social contexts that shape an individual’s health, the study hopes to highlight how there are multiple avenues that determine health equity and that health inequity can only be solved by looking at an integrated network of solutions. Historically, public health scholars have operated under a framework that individual explanations could explain poor health outcomes. They may have acknowledged that environmental factors impact an individual’s health and that socio-economic factors patterned the health of populations, but general consensus held that the poor were ignorant.

This rhetoric of personal responsibility, which often sits as a subtext to the health dialogue, leads to many assumptions about people and communities who experience poor health.

“There’s this idea that poor people behave badly and because they behave badly they have worse health outcomes. And to address that, we need to teach them to behave better. We need to teach them about healthy eating and get them into smoking cessation programs.” Mujahid said. “But, in order to create health equity, we need to understand that some of these health behaviors are shaped by the environments patients live in. Environments should be conducive to health promoting behaviors.”

Social epidemiologists like Mujahid are now working to outline this web of social and environmental factors and are using studies like RURAL to take health outcomes out of a vacuum and place patients within the environmental, social, and economic contexts in which they live. While diet and exercise can play a part in increased heart disease, in many cases these behaviors are shaped by their environment. For example, in a remote community where healthy options are not available or financially viable, individuals will be more likely to eat cheaper, processed foods. Yet, dominant rhetoric in the US continues to suggest that individual responsibility—or lack thereof—is the underscoring causes of such poor health outcomes.

Indeed, this rhetoric of personal responsibility, which often sits as a subtext to the health dialogue, leads to many assumptions about people and communities who experience poor health. When many people envision rural America, they see a community of uneducated, white residents living in a region defined by economic and cultural despair.

However, this homogeneous understanding covers a reality that is much more complicated and masks problems of inequity within rural communities as well. Demographically, rural communities have become more and more diverse in recent years: the 2010 Census found that Hispanic, Asian, and Native Hawaiian and Pacific Island populations represent more than half of the population growth in rural America. And, with this increase in racial diversity, comes inequities in public health priorities, medical access, and health outcomes between racial and ethnic groups—a fact that is often overlooked when researchers rely on aggregated population data to base their research. One 2017 study conducted by the Centers for Disease Control and Prevention, for instance, found that while rural communities, overall, have worse health outcomes and less access to health care than their urban counterparts, the burden of illness is often disproportionately carried by rural racial and ethnic minority populations.

“There’s a lot of concern for the status of rural whites. And, I do think there’s a lot of suffering of rural communities and that we have to do a better job of recognizing that,” acknowledged Mujahid. “However, there are still disparities within those areas that affect the health of Black and Latinx communities. We have to understand why these disparities exist and why access to health promoting resources is worse for certain marginalized groups.”

The dominant narrative of rural communities, Mujahid suggests, also focuses too centrally on the economic vulnerability that underscores the region. This focus mis-characterizes the spirit and agency of individuals living in these communities. “Many times these communities can be thriving despite their high poverty. They can be communities with strong social support networks. Communities that come together and support one another. This resilience needs to be recognized and celebrated.” Mujahid said. “And, in order to honor that resilience, we need to fix the structures that endanger health in the first place.”

And that is just what the RURAL team aims to do. As an interdisciplinary team of doctors, social epidemiologists, anthropologists, and psychologists—representing institutions as diverse as Boston University, UCLA, Louisiana State, and Emory University—they hope to outline the economic and social structures that create health disparities in rural communities and suggest how to best improve those structures to improve the health of the people living within them.

By diagramming the structural causes of health disparities, the RURAL team, and social epidemiologists, outline the reasons that people look at health individually. By suggesting that structures rather than individuals are the reason for health outcomes, these social epidemiologists are shifting the scale of public health solutions. No longer can individual education and interventions be dominant solutions to health crises. Reshaping economic, social, and political structures into more just systems is now central to creating health equity. And the responsibility to advocate, restructure, and execute this reimaging cannot lie only with public health practitioners and communities with poor health outcomes. It’s the responsibility of everyone.