New study shows that, following the 2008-2009 foreclosure crisis, Inland Empire police budgets ballooned to a whopping $1 billion annually, with increases unrelated to violent crime rates. Jurupa Valley, with 100,000 residents, tops the list with 37 percent of its budget going to police, but a violent crime rate lower than the national average.

BERKELEY, CA: A new analysis commissioned by the Othering & Belonging Institute at UC Berkeley spotlights the immense share of expenditures that cities in the Inland Empire of Southern California have dedicated to policing since the Great Recession of 2008-2009, while cities largely failed to tackle rising poverty and housing insecurity.

Researcher Ángel Mendiola Ross’s paper, “Governing Inequities through Police in the Inland Empire,” reports that by 2018, the cities of the Inland Empire—comprised of San Bernardino and Riverside counties—were spending over $1 billion annually on their police forces.

The study finds that the average share of city expenditures that went to police grew steadily in the wake of the Great Recession to nearly 25 percent by 2016. The share declined slightly to just over 20 percent region-wide by 2018. Even as overall municipal expenditures grew, the top six cities’ police budgets surpassed 30 percent of all spending.

The city of Jurupa Valley (incorporated in 2011) topped the list, devoting 37 percent of its budget to police. Statewide, no city of 100,000 residents or more spent as large a share on policing as Jurupa Valley.

With over twice Jurupa Valley’s population and a much larger city budget, San Bernardino spent 31 percent, or $74.5 million dollars, on policing in 2018. The paper, published as part of the Institute's Blueprint for Belonging series, notes that this is “more than 11 times what the city spent on housing and community development.”

For points of reference, the author notes that the city of Berkeley devoted 16 percent of expenditures to police in 2018, and Oakland and Los Angeles each spent 18 percent on policing.

“When Black and brown residents lose our jobs or lose our homes to predatory lenders, entrenched interests would rather send police than offer a hand of support. Prosecutors and policing do not create public safety. Public safety is improved when communities thrive, and that cannot happen when we continue to overfund prosecutors and policing at the expense of everything else,” Quarles added. 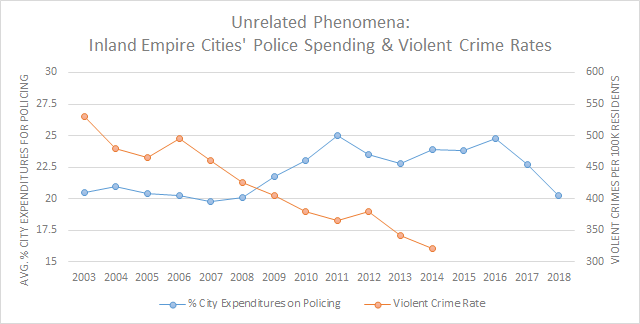 The reported shares of budgets spent on police are staggering, especially when considering that the analysis looks at spending on police as a share of not only cities’ general funds, but of the whole of their expenditures, including utility-related expenses and payments on long-term debt. What is more, the study finds “virtually no relationship” between decisions about the share of funds spent on police and cities’ violent crime rates.

Poverty increased in the vast majority of Inland Empire cities during the period reviewed in the paper, as did the share of renters relative to homeowners. The region was one of the major epicenters of the Great Recession-era foreclosure crisis, due in large part to predatory lending practices targeting Black and Latinx Southern California residents.

“The paper leverages compelling data to fill out the context for the racial-justice uprising we’re witnessing today, and its range of legitimate demands," Joshua Clark, who edited the Blueprint for Belonging series, said. “This is not just about murders committed by police, and the over-policing of Black and Latinx communities, however critical those issues are. It is also about redressing generations of disinvestment and destruction of opportunities for wealth accumulation in Latinx and especially Black communities.”