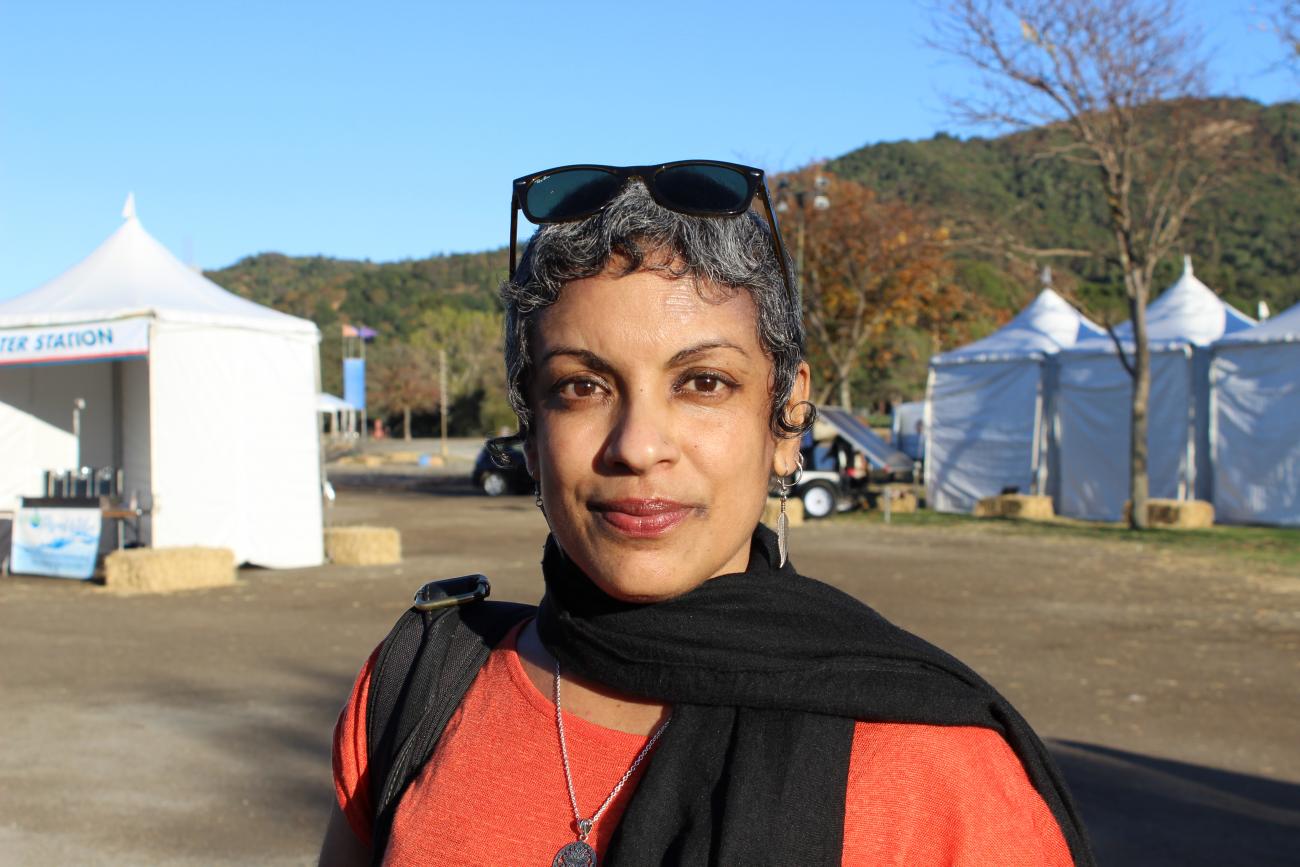 Balajee poses for a photo at the Bioneers Conference in San Rafael, CA

What does spirituality have to do with belonging? What are we missing when trying to identify the root causes of suffering and inequity? How do we remedy collective suffering as a society?

These are some of the questions Sonali Sangeeta Balajee, a Senior Fellow at the Haas Institute, has been exploring for years through her work in Portland with the Government Alliance on Race and Equity.

Over the next couple of years she’s looking to harness some of the ideas around those questions into frames that offer pathways towards structural inclusion.

At the foundation of her research and work on belonging is spirituality, which she defines as a sense of purpose and meaning, specifically at the collective level.

Balajee earlier this month shared some of her ideas at the Bioneers Conference in San Rafael, California, where she participated in a panel discussion on “radical organizing.”

There, she, and other members of the panel, engaged the audience on how we might go beyond organizing for singular issues, policies or candidates, and think more deeply about transforming structures and community culture.

After the discussion she sat down for an interview to talk more about her work, and specifically what she’s doing as part of her fellowship.

Have a listen here, or in the embedded link below.

Sonali Sangeeta Balajee: For the past 13 years, roughly, I've been working for government, up until 2016. And was a part of the original regional movement building around racial equity in government, up in the Pacific northwest, and helped move from a planning steering level the Governing Alliance on Race and Equity, and Haas was directly related to that. john powell was directly related to that, and so there were a few projects that john worked with with our county up in Portland, Oregon, Multnomah County, and from that wealth of work plus my work in arts, activism, and health and well-being in spirit-based practice, came about this idea for a senior fellowship, and shared that with john. john said it would be great as a project or a senior fellowship to move forward and it's based on his work, actually, bell hooks' work, other key leaders on elevating the connection between social suffering and spirit-based suffering. Social well-being and spirit-based wellbeing.

So from the work around studying the root causes of inequities and root causes of suffering, very conventionally we have come into a place of looking mostly at political, structural-based solutions. Very important at the systemic level. Where we have as a society omitted change is looking at liberatory solutions, solutions based on belonging at all levels and integrating, revitalizing, the connection to spirit, meaning sense of purpose, sense of meaning, interconnectedness, having approaches that move through an artistic vision, etc.

And so I found that in government that was sorely lacking. I had nurses, directors, people in land use talking about trauma and healing and no place for that, we don't have overarching narrative for that, we don't have practices or legitimacy, and so this work says, the two key questions are: 1. what does the ecology of caring and belonging look and feel like, how do you make that practical so people can practice it, try it out, embody it, and then how do we think about what are those kernels of understanding and practice that we should all be learning in order to do this work more effectively and holistically and transformatively, right? So that's what I'm trying to put forward in this year, first year, and then second year, third year, pilot it and try out and test.

So first I think in terms of talking about spiritual suffering we need to think about the definitions of these words and spiritual I go back to this meaning of sense of purpose, having a sense of meaning, not just at the individual level, but the ability to have that collectively. And so the other part of talking about spiritual suffering at a variety of levels is understanding that the Western tradition, the Western way of being has really co-opted or forced us into looking at spirituality just at a private level, at an individual level.

And this work says we need to take that back and we need to look at this in a collective way. So what that might look like. In Portland for instance we had a rise of white supremacists over the summer. We had a major series of murders that happened on our Max train, and at that moment, there was a clear articulation from communities of color, as the rise in numbers of white supremacists hit the streets, of the deep collective spirit-based suffering. They might not have used the word spirit. It was very much about feeling depressed, down, not connected, not valued, disempowered.

And it wasn't one person. It was a unified sharing of that.

If we really look at the definitions as being a sense of meaning, a sense of purpose, interconnectedness, feeling connection and belonging, and intraself between self and other, between self and place, self and land, community and land, the expression of the suffering and the despair was an interruption and a disconnection and a feeling lost around the connection they could be having, and a fear of feeling completely isolated and a historical perpetuation of that.

The spiritual suffering that I'm talking about had much to do with something that we would say is sort of a malaise of the soul, a malaise of something deeply, that speaks to something bigger than ourselves, essentially.

Another example might be hearing at the Bioneers Conference here, much about Standing Rock, and what happened in a variety of ways to folks who were the water protectors, and keeping the spirit alive, and also feeling deeply as if this is a grave spiritual suffering that they're encountering when their spiritual priorities, their economic priorities, or environmental priorities, all within this greater frame, are being denied and are being usurped.

So in order to talk about how we can embody belonging, and I speak about co-liberation, freeing ourselves together, I needed to come up with the frame that really spoke to all of the different areas first and foremost, which I couldn't find one that was put into terms that were not just poetic, but also effective in terms of justice-related work. So I have six categories that I've come up and within each one of those is research elevated from the 40 interviews that I had with racial justice, environmental justice, amazing national leaders in this work, and from all of this research in the mind sciences, in justice, in spirit work, liberation work.

And so we see these six categories as not just focusing on becoming, or what we traditionally think of as action-based, activist-based, also looking at, from the mind sciences, bestilling as a really key component of the whole frame of change, beloved as connecting to sacred purpose. john talks about what we love, what we care for, expanding the circle of human concern, in addition to belief, so we don't often call out the category of needing to question our own assumptions, go deeper into implicit bias and figure out the structural beliefs that we embody.

So that category speaks to that, as well as putting forward alternatives for belonging, beliefs about belonging. And then we talk about becoming and beholding, which Governing Alliance in Race and Equity, we in government do really well, which is analyzing. How do we behold what we're seeing? What's the data that we use? And this type of beholding talks about how do we feel as well, leading to belonging. So there are six categories that this frame is putting forward with really practical ways to embody that. I feel, for one of the first times though, it's a place where all of these disciplines come together and shine through.

So I think there are maybe three audiences primarily. So first, I'm working on a small project with GARE on what it means to lead, what does leadership look like towards racial equity? There's some content based knowledge but it's also deeply processed based. So what are the systems of learning about the work of relating to each other, of relating to our clients, or the people we're serving, or the electeds that we need to keep in mind our approach in order to move forward. So that's one possible audience we've been working with. The 180 members who are a part of the network we've been working with, the steering committee on trying to move something like that forward.

Then there's another audience, I would call them equity-based practitioners, they're in a variety of fields: government, health, education. I've had some public sector organizations at state levels come forward and say 'how do we embody this belonging frame that you're putting forward', and 'how do we focus on not just what we produce in terms of things we can count, but how do we focus on the approach and the being in the work, regardless of the chaos that comes.

The third possible audience could be, really your general-based audience, and with that, I think, given what john talks about, about 'you might have your good content but you have to figure out how to message that', that's an area of work that we need to focus on.

So this is a one-year fellowship and it's really a social entrepreneurial fellowship for me to gather research, create frames, and test them. And I've tested them in a couple ways this year, a couple closed sessions with 20 to 30 people and then at a couple keynotes. And a few of the materials have been universally distributed, and the next steps for me will be to pilot this frame in a couple organizations, and see what are the outcomes that actually shift in terms of what is interrupted, what positive policies are put forward for structural inclusion and belonging, co-liberation. What are some of the health indicators that we can see going through this that happened as a result of doing this work in that way.

So there's an organizational component. There's another component john, upon listening to one of my presentations, had said 'you're also talking about a public health concern without a public health response,' especially for people of color doing this work and the levels of health issues people are starting to exhibit as a result of all the work they're doing in the ways in which they're doing them. So I'm really after creating a project that looks at, a research project, that looks at, how, 'if we embody some of this frame, what kinds of positive and health indicators can we see in people doing this work, especially for people of color?'

And the third piece is just creating more materials that are accessible, so my task was trying to sift through and elevate the DNA of this, and I understand that the language might not be completely accessible for the general public. I'm interested in using arts, animation, podcasts to exemplify this in ways that people can grab on to it, and where this can really be seeded in what they do in more sustainable ways.